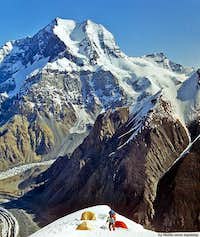 Pik Korzhenevskaya from the slopes of Pik Somoni

I am not on Summitpost anymore. If you want to take over this page, please contact me!

Pik Korzhenevskaya is the third highest peak in the Pamir after Pik Somoni (formerly Pik Kommunizma) and Pik Lenin, and the fourth highest in the former Soviet Union. It is located just south of the Tajik-Kyrgyz border in the "Peter The First" sub-range. It rises on the south bank of the Muksu River, and to the west of the peak is the Fortambek Glacier. Pik Korzhenevskaya is just a few kms north of Pik Somoni.
It was first discovered in 1905 by the Geography professor Korzhenevski, who had followed the Muksu River to the south side of the peak. He named the peak after his wife, Evgenia Korzhenevskaya.

The first ascent was not made until 1953; back then an eight-person team from Leningrad, lead by A. Ugarov, approached the peak from the north-west via the Muksu valley, ascended the lower Fortambek glacier and climbed the peak from the western side.
1972 the first ascent by an all-female team was achieved, and in 1986 the first winter ascent was done.

The classic routes up Pik Korzhenevskaya and Pik Kommunizma start from the same base camp. Consequently many climbers attempt both mountains using Korzhenevskaya to prepare for higher and slightly harder Kommunizma. Several Russian and Pamir-based companies offer expedition services for both peaks (see External Links section). 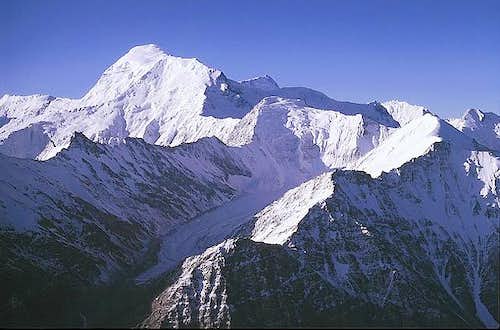 Korzhenevskaya has been climbed from almost every direction, including a first winter ascent in 1986; most of these ascents were by Russians. An excellent overview of routes on the mountain are illustrated here.
For grade conversion, look here.

This is the most common and easiest route (Russian Grade 5A) that was first completed in 1966 by V. Tsetkin.
I think the route is generally a bit underestimated. It is only "easy" if all fixed ropes are in, which is done by guides - but it takes time for them to do so. There are also some passages between 5800m and 6100m without ropes, where you might find pure ice or loose snow on ice, and some places between 4700m and 6000m are exposed to rock fall, some rocks are of considerable size.
It normally takes acclimatised climbers around five days to go from the Moskvina base camp to summit and back to base camp. A good photo showing the route and camps is available here. The route ascends from the south and attains the summit ridge from the west side. Climbers ascending the southern crest route typically set up 3 camps at 5300m, 5800m and 6400m. Alternative camps are at 5100m, 5600m and 6100m (very small place, only for about five tents!)

From the Moskvina Glades BC you can access various other routes:

Flights to Dushanbe are expensive and limited.

Currently the best option for most is the flight with Turkish Airways via Istanbul. Be aware that this flight currently (2008) only goes twice a week, so they fill up rather quickly (more people go to Tajikistan than you would perhaps think), and changing your ticket will be close to impossible.

Other options are to fly via Moscow or Tehran.
You can also go to Tashkent, Bishkek or Almaty, but I think the hassle with visas and dragging your stuff around do not make this worthwhile.

Note that the Karamik crossing between Tajikistan and Kyrgyzhstan is closed, so you cannot take a buses/marshrutkas/taxis from Bishkhek to Dushanbe, unless you want for some reason take the long haul via the M41.
Also - there are no flights between Tashkent and Dushanbe; land transport is available thought, and you can fly Penshikent-Dushanbe once across the border.

Helicopter to Base Camp

Helicopter arriving at base camp

Note that flights can be postponed in bad weather, and that the helicopter is rented from Tajik Airlines or the Tajik Military - so sometimes they are not available. Flights out of base camp can be irregular.
DO NOT plan on flying out a day before your plane from Dushanbe goes!
Often they will assign the seats for flying back to Jirgital in Base Camp depending on your airplane return ticket home, so do not count on flying out the day you have "booked" when buying your package.

The approach for the exploration of the area, the first ascent in 1953 and also subsequent ascents was done hiking in. The expedition went from Muk village up the Muksu river and crossed multiple passes, hiked up the lower stretches to get to the west side of the peak.
This very long and strenous approach has not been done in decades. In 1988 an expedition from GDR tried it but went to another peak (Pik Radianow, 6330 m) because of the rough nature of this approach - and who knows which state this approach is in today!
This is an option for explorer only who are willing to risk their chance to summit due to failing on the approach.

The other possibilty is via Altyn Mazar to the east (border crossing with Kyrgyzstan, west of Pik Lenin) - this unoffical border crossing is hard to pass due to increased drug trafficing and controls there; most people who tried to enter the Tajik mountains there in the past were turned back by the military.
Also the river Muksu is hard to cross even with horses, but only in late summer after a winter and spring with little snow, and horses are available nowhere near as far as I know.

In 2008 the regulation was that you could only get a visa upon arrival in Dushanbe if there is no Tajik embassy in the country you arrive from.
It is advisable to get the visa before going to Tajikistan anyways to avoid the line-up in the customs room.

Europeans I suggest to apply for their visa at the Tajik embassy in Vienna - they are known for processing them fast and uncomplicated.
Link: Embassy of Tajikistan to Vienna

Note for UK citizens: "Since late 2007, in response to new UK visa requirements for Tajik nationals, Tajikistan introduced a regulation requiring UK nationals to go in person to a Tajik consulate to apply for a Tajik visa.
The Vienna Consulate handles visa requests very expeditiously and in February 2008 they confirmed that they are not currently applying the above requirement - although they now insist on a Visa Support Letter for UK nationals. It is worth checking with them by e-mail." (Source: Pamirs.org)

Once inside Tajikistan you are required to register with the OVIR within 72 hours of your arrival. Again, this is taken care off by your tour organizer (if for some reason you want to do it on your own - expect the issuing of the permit to take 3 days).

On a side note: Pik Korzhenvskaya and Pik Somoni (when climbed from Moskvina Glades) are not located in Gorno Badakhshan Autonomous Province. If you intend to climb a peak there, you need a permit for entering this province. It is usually easily obtained together with your Tajik Visa for an additional 20 Euros.

When climbing over 6000m in Tajikistian you are required to obtain a high-altitude permit of 80 Euros or 100 Dollars.
This in theory entitles you to climb one summit. Your travel agency will most likely issue you the permit for one peak, and when you tackle another peak, you are supposed to buy the permit in BC.
However, once you are in Base Camp, nobody will check, and most likely the package you buy will be OK for any peak you climb in the area.
You are also - whenever moving in the backcountry - supposed to pay an "ecological tax" of 1$/day. This will, however, be included in your tour package, and is only an issue for anybody attempting a peak without agency support.

Additional comment from alexclimb:
If someone asks for further charges ask the written documentation on what you are supposed to pay!! The permit must be issued only by responsible authority and not by the person who asks you your money! A lot of people have paid but nobody knows for what they paid for.

From user runout:
"I was in the Moskvina bc last summer and was very disappointed. the worst bc i have ever been. We had 'full package'; less food, bad quality, mould bread,...
The water they took for cooking was 50m below the toilet. pamir peaks the (only) operater of the camp was not very cooperativ with non-russian-speakers.

I recomend to not go there until this changes! In case somebody has to go there really: the 'small package' will be a much better deal, even if you buy some additional meals and pay extra for baggage.

Khan Tengri BC (Northern Inchilek) was very much better!

If you climb Pik Korzhenevskaya, most of the hassle usually involved in climbing in Tajikistan is taken care of by your travel agency. If you intend to climb the peak from any other side than Moskvina Glades, consider taking the help of an agency/tour operator anyways, because you will loose a lot of time and nerves otherwise, unless you are experienced with these issues, speak Russian or Farsi and "know how the show runs" in Tajikistan. It is a outmost beautiful country, but the bureaucracy turns off quite a few people.
Choose your agency carefully, in order to make sure things run as smoothly as possibly. Two recommended agencies I listed below.

July and August are climbing months with the best weather and climbing conditions, but also because the helicopters fly only mid/end of July to end of August.

The best map covering the entire Pamirs is Markus Hausers Pamirs Map. It is distributed by Gecko Maps

Online Maps of larger scale (1:100 0000) are currently available at:
- Tadjikistan Topographic Map Set
- Poehali: CAUTION - I had a Trojan warning when I used this site a few months ago. Make sure your virus/Trojan program is running well when using any of such sites! 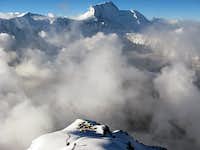 - necessary documents (permits, ecology tax, registration in immigration policy)
- Airport transfers
- transport with car from Dushanbe-Garm-Dushanbe (for 200 additional Euros you can fly this stretch)
- helicopter flight to/from BC (30kg of luggage/person free, $2 per extra kilogram)
- accommodation in Dushanbe (2 nights in very basic hostel)
- place for your tent
- pit toilet (little hut)
- electricity (generator runs only in the evening during dinner time and plug-ins tend to be well-used - do not count on being able to use it all the time!).

Note that with a small package you can buy the services that are included in the large package:
- breakfast: 6 Euros
- dinner or lunch: 12 Euros
- sauna and shower: around 0.5-2 Euros.

As person with a small package you need to buy a lot of these services to spend the difference of 650-800 Euros. If you can live with the cheap hostel and the car transport to Garm, and bring some BC food of your own, you can save quite a bit of money with the small package, even if you buy a lot of meals in BC.

Also: Overweight on the helicopter is usually not a problem. Just take the money required, they do weight your stuff in Garm before boarding the helicopter.