Morning at the Soldier Lakes

This area is not defined by mountains soaring into the sky, granite cliffs standing tall or jagged spires waiting for chalk bags. It is more an area of long ridge-lines to be traversed and high mountain lakes. It is also known mainly for the long and un-dammed rivers, in particular the Salmon, which draws hundreds of kayakers, canoers and floaters on a typical weekend.

The peaks are usually nothing more than high points on ridge-lines. Peak 9107 is an unamed peak that sits at the western end of a ridge overlooking the Soldier Lakes, in the same area as Mount Mills (the only named peak for some distance). Big Soldier Mountain, complete with lookout, stands some miles to the northwest. Due to the relative ease of travel, it is possible to traverse the entire ridge from Mills to 9107 and down into the valley at any point.

Evening reflection
To the trailhead

About 18 ½ miles north of Stanley, take the Seafoam Road heading north toward Vanity Summit. Drive this road to its terminus at the Josephus Lake campground, 21 miles later. The road is well-signed and easy to follow, but a high-clearance vehicle is recommended and 4WD would be beneficial. This is an old mine road, so very little thought went into recreational travel; there is a 4 – 5 mile section where it is unlikely that two vehicles can pass, unless you have very slender cars.

It is also approachable from the Ruffneck Peak area (see that page for directions) via a very long trail.

Once at the trailhead a number of routes are possible. I climbed the peak from the Soldier Lakes basin. If following this route, take the trail system into the Soldier Lakes, about a 3 ½ - 4 mile hike. From the lakes, gain the east ridge and follow the easy slopes to the summit. The only difficulty I found was the number of burn areas, which have led to some loose slopes.

Due to the wide open nature of this landscape, the mountain is climbable from a number of other directions, including a ridge traverse from the Mount Mills area.

In all likelihood, this peak is a high point of a ridge circling an ancient caldera. Many lake basins in the Salmon Rivers are volcanic in origin which later filled with glacial melt. Remnant hot springs pepper the area, which make for ideal overnight destinations.

As a result of this formation, followed by glacial action, the peaks in the area tend not to stand much above the surrounding terrain or neighboring peaks. Long ridge lines can be full of many bumps that technically qualify as peaks. 9107 is the western anchor of such a ridge, with Mount Mills as the eastern end.

Summit Panorama on a clear day

On a clear day, the views from the top take in the bulk of the Frank, the White Clouds and a nice view of the Sawtooths. The Salmon Rivers are also prone to fires, especially late in the season. I was lucky enough to hit the area on a mostly fire-free year, but be aware that it is rare.

There is no red tape to speak of, although you may run into fire restrictions late in the year.

If you are a fisherman, be aware of daily limits and rules.

It is certainly possible to climb this as a day hike, but one attraction of the area is the profusion of mountain lakes, all with decent fishing. Any of these would make a fine backpacking destination and many people make a loop of the lakes. Try not to use the more beaten campsites, to avoid overuse. 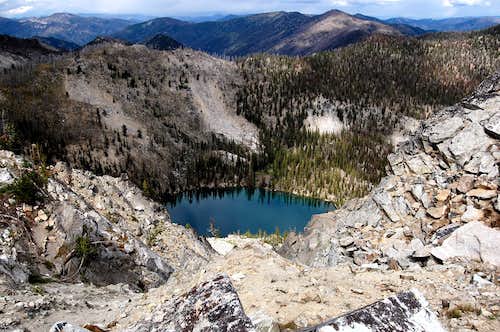 Altough this mountain is not covered in any guide, there are some great resources for familiarizing yourself with the area:

Tom Lopez's Idaho: a Climbing Guide is the best resource for mountains in Idaho.

Ralph Maughan's Hiking Idaho has directions for hikes in the area.

Margaret Fuller's Trails of the Frank Church Wilderness is the authoritative overview for this area.

The Sawtooth webcam is a great source for checking nearby conditions.

See Splattski's page for a trip report up nearby Mt. Mills.