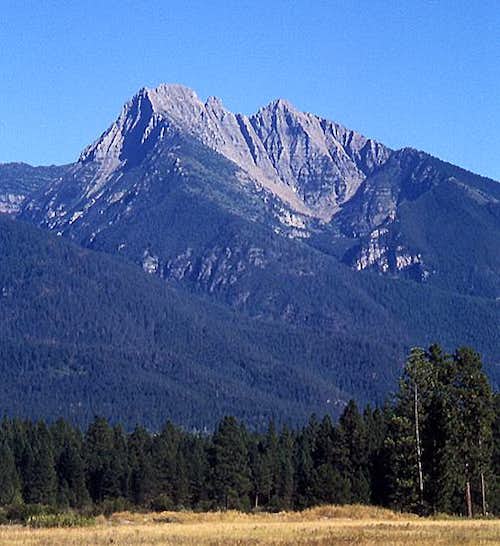 Mount Calowahcan from the NW 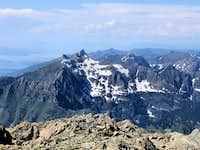 Mount Calowahcan is one of the most spectacular peaks on the western front of the Mission Range. Its easiest described route is Class 4 making it one of the more difficult summits in the range. Mount Calowahcan has three very distinct summits. The north summit is the highest at 9,061 feet. The prominent south summit is shown as 8,881 feet and the much smaller middle summit is also about 8,880. Routes on the south and middle summits are also Class 4.

Setting from the W - NW.

The peak has undergone several name changes. Prior to 1922, it was apparently known as Mount Teton or Teton Peak. In 1922 it was named Mount Harding after President Harding. Then in 1991 the name was officially changed to Calowahcan after a prominent local family. According to the USGS, the English translation of Calowahcan is "Beaverhead". 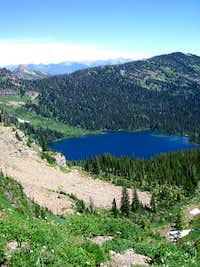 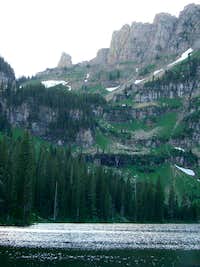 The shortest approaches to the mountain are from the west. To climb from the south or to reach Summit Lake and climb from the east, the most logical route is over Eagle Pass via the Eagle Pass Trail. The Northwest Ridge can be approached from the road north of the Eagle Pass Trailhead. Old maps show trails reaching Summit Lake from Elk Lake to the northeast and from Spider Lake to the southeast. These trails are not shown on newer maps.

Mount Calowahcan is on the Flathead Indian Reservation within the Tribal Mission Mountain Wilderness. A hiking permit is required. Permits can be purchased at most sporting goods stores in Western Montana, or through the Confederated Salish and Kootenai Tribal Recreation Department in Pablo, MT (Phone: (406) 675-2700). The permit is currently $15.00 per season expiring every year on the last day of February. Note that this peak is NOT in the Special Grizzly Bear Conservation Zone.

Class 4 on the West Face. 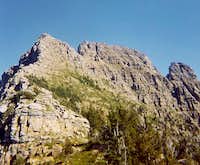 Northwest Ridge This is the route that stands out when the mountain is viewed from the west or northwest. Reach the ridge through the brush and timber above the road, then follow it to its junction with the west face. Traverse an obvious wide ledge southward across the face until a good route up is found. Climbing on the face is Class 3 and 4. ROUTE PHOTOS: 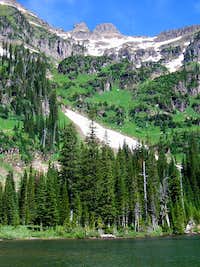 East Side above Summit Lake

Traverse from the South CLIMBERS GUIDE TO MONTANA, by Pat Caffrey (out of print) rates the traverse over the south summit to the north summit as Class 4. From Eagle Pass ascend the south summit directly up its southwest ridge. The last 15 feet are reported to be Class 4. From the south summit, traverse northward on the ridgeline and southeast side. The traverse is overall Class 4 with snow that may require a rope (certainly an ice ax) in early season. The middle summit can be climbed via a chimney on its east side – Class 4. Caffrey states that there are Class 5 routes on the east side above Summit Lake, but does not describe them.