Picture Puzzle is part of the Inconsolable Range, a subsidiary grouping of peaks located immediately north of Mt. Agassiz (considered the northernmost peak of the Palisades crest). Although numbering less than a dozen, these peaks offer sufficient challenges in their own right. Picture Puzzle’s massive west face greets the hordes of hikers and backpackers ascending the latter half of the trail to Bishop Pass. The name Picture Puzzle was formalized by USGS after developing from common usage. Although this peak isn’t on the SPS list, the views from the summit make the short climb a worthwhile goal for anyone. 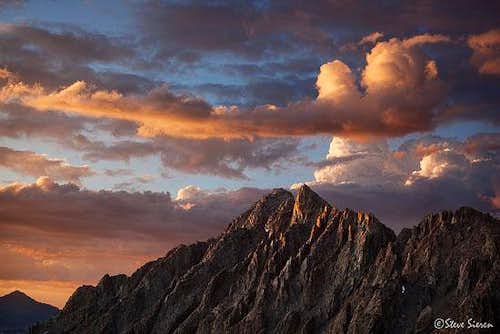 Picture Puzzle can be approached from two trailheads: North Fork of Big Pine from the east or South Lake from the north. The approach via North Fork of Big Pine follows the trail all of the way up to Sixth Lake at which point you strike out cross-country climbing up the moraine valley to the southwest. The approach ends at the foot of a steep NE facing coulior that is either filled with snow or scree, depending on time of year and snow conditions. The approach from South Lake uses the Bishop Pass trail and provides multiple options to climb either the North or West Faces of Picture Puzzle. 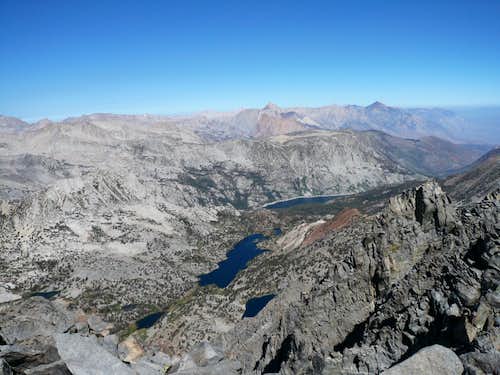 South Lake as seen from the summit of Picture Puzzle

There are three routes described in R.J Secor’s The High Sierra Peaks, Passes, and Trails although the adventurous technical climber can probably find multiple routes on the peak’s many arêtes.

NE Couloir: Class 3. This is a straight forward climb that may require crampons most of the time. Secor rates it as a 40 degree slope but it seemed a bit more near the top. At the notch, climb the true summit’s class 3 north ridge to gain the top.

North Face: Class 3. Accessed via the Bishop Pass Trail and can be approached from either the Chocolate Lakes loop trail (Bullfrog Lake Junction 1.8 miles) or Ruwau Lake trail. The route heads up the North Face and then around the west side avoiding several false summits and pinnacles. The true summit is climbed after first dropping into the notch that marks the top of the NE couloir.

Everything you need to know about permits, regulations, and driving directions can be found on the Eastern Sierra - Logistical Center page.

Camping can be done almost anywhere between the trailheads and the peak. Bullfrog, Chocolate, or Ruwau Lakes provide good jump off points for the north face while the Bishop Lakes lie under the West face (and Jigsaw Pass for those doing a loop hike). Any of the Big Pine Lakes could be used as the starting point for the east side.

Climbing can be done in almost any season but May through October are the most popular times. Note that the north face and especially the NE chute will usually hold snow into the late summer. Check current weather. 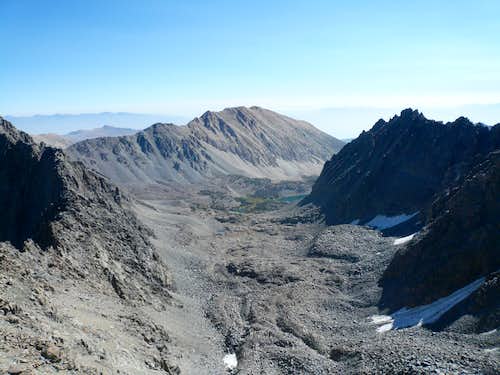 Coordinates off by a mile

Re: Coordinates off by a mile

Interesting. I used the map feature to locate the top years ago.