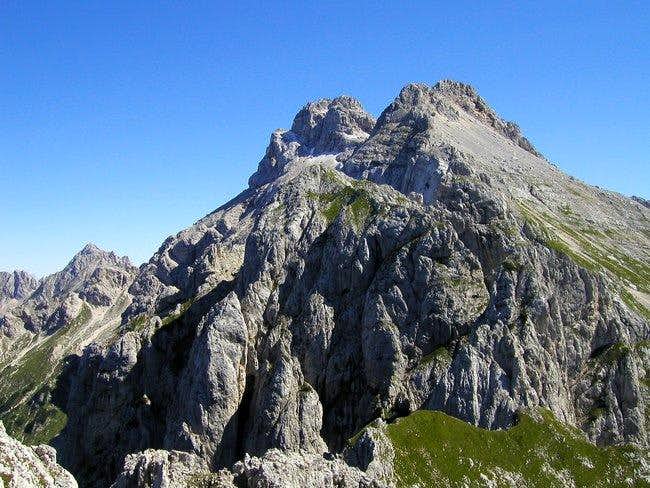 A Beautiful panorama of Razor (on the left) and Planja from Golicica.

Planja is a very powerful mountain in south part of Razor & Prisojnik group.

Planja is not very important mountain in nearness of Prisojnik, 2547m and Razor, 2601m. Razor is its neighbour. Between Razor and Planja is Sedlo Planja pass, 2349m. The Planja pass is from the summit of Planja in NE direction. From Planja pass leads the normal marked route on Planja, which is not hard and it is very short. From the summit is in SW direction very famous ridge over Prevcev stolp, 2213m, Kanceljni, 2133m, Germlajt, 2051m and before it falls down to Trenta valley is the last peak in this ridge called Golicica, 2108m. This is one of the wildest parts of Slovenian mountains. The ridge Golicica – Razor is in the plan of many climbers. But the ridge is very hard. If you want to climb it you must be good in climbing around UIAA IV-V but you can come to harder places if you lose the best passages.

Planja is very heterogeneous mountain. But from all sides it is magnificent. On the south side has very steep grassy slopes and one of the strangest faces called Ogledalo (the Mirror) . It is very popular face for sports climbers. This south face is very hard approachable.

The second famous and interesting sight is Utrujeni Stolp or Tired Pillar, a cliff that got ‘tired’ and leaned on Planja, forming a window.

Planja has beautiful north face. This face is one of highest and hardest in Slovenian mountains. Here are the most reputable climbing aims. For that famous north face is typical the magnificent series of plates. In this face you can find only hard climbing routes. The height, sheer slope and difficulties are graduated from left to right side of face.

Planja is place with a very fine view. You can see all the highest peaks of Julian Alps.

Trenta is by many most beautiful and most romantic valley of Julian Alps. It is certainly one of longest (around 22km), placed in the heart of Julian Alps, dividing them into western and eastern part. Its mouth or end is near the small town of Bovec where it enters Bovec basin. Through it runs the most beautiful Slovenian river, crystal clear Soca! It has amazing light blue – light green color and is very popular for rafting. Along the river there are few villages and hamlets. Largest and most beautiful are Soca and Trenta villages. Trenta is very deep valley. Some of the peaks rise 2000m above it. Trenta begins bellow beautiful Bavski Grintavec (2347m) peak. Its 5km long upper part, squeezed between Jalovec and Mangart group and Trentski Pelc ridge is called Zadnja Trenta. This is wildest and most beautiful part of the valley. At the end of Zadnja Trenta, where valley begins to make 180 degree turn around Trentski pelc group is source of Soca river. It appears on the surface 100 meters above valley floor, coming out of deep hole filled with crystal clear blue water, surrounded by smooth and dark cliffs. A kilometer lower, at bridge over Soca and Limarica rivers, Vrsic pass road begins to ascend. Few hundred meters up the road is famous monument to Julius Kugy which as ever looking at Jalovec. This is one of most beautiful panoramas in Julian Alps!

Starting point of one of the routes is Koca v Krnici hut(1113m), which lies in Krnica valley. The valley is beautiful, with stunning scenery. All around are some of the highest peaks of Julian Alps that fall into the valley with huge walls: Skrlatica (2740m), Rakova Spica (2545m), Razor (2601m) and Prisojnik (2547m). Krnica ends with probably most beautiful amphitheater in Julian Alps – Kriska Stena.
Hut is accessible from Kranjska Gora to Vrsic pass road. Junction towards the hut is some 2 kilometers behind Kranjska Gora, just at the bridge where main road crosses over Pisnica river to the right, you continue straight. From the bridge is 3 kilometers to V Klinu pasture where you have to park. From here is 20 more minutes to the hut. If you are on foot from Kranjska Gora you will need 1.30-2h.

The heart of the region is Kranjska Gora resort town, 84 kilometers from the Slovenian capital Ljubljana. Starting point for Planja is either Vrsic pass (12 kilometers south of Kranjska Gora), Trenta valley or Krnica valley.

You can reach Planja over many marked routes from diffrent valleys and huts. I named some of the possibilities. Then I put some hard climbing routes in north face and south face.

From Krnica valley. Over Kriska stena (wall) and down to Pogacnikov hut and up to Planja pass.

Many others climbing routes too. 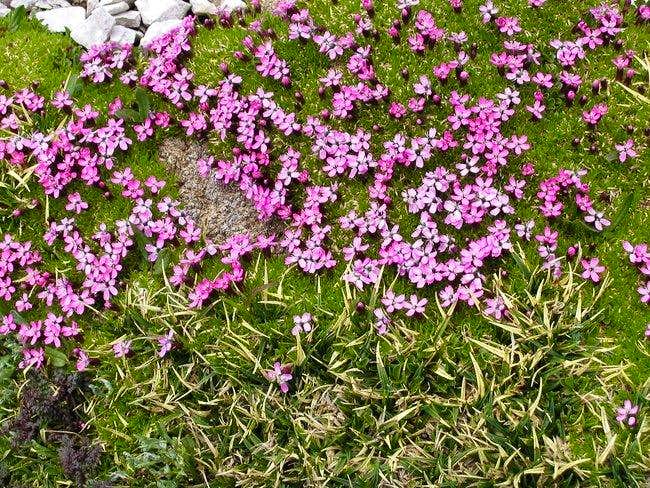 No limitations but Planja leads in Triglavski Narodni park so you must be kind to the nature and other beauties.

The only thing you might pay is parking on selected locations.

The best time for climbing on Planja is from early Summer to Autumn. Be careful in early Summer on some snowfields.

Some information about huts.

POSTARSKI DOM NA VRSICU hut (1688m) is highest standing of 3 Vrsic pass huts and has most beautiful view. Since it is not accessible by car it remained truly mountaineering hut. It has been built in 1952 on a small terrace bellow the Vrsic peak (1737m), after which pass was named. It has 65 beds, electricity, phone, hot water and its open from June 1st to September 30th. 15 minutes on foot from Vrsic pass.

TICARJEV DOM NA VRSICU hut (1620m) is standing on the southern side of Vrsic pass, just by the road. First hut here was opened in 1912 and was named Slovenska Koca (Slovenian Hut). Between 1964 and 1966 a new hut has been built, just by the old one, which was demolished upon finishing the new one. In April of 1975 huge avalanche from Mojstrovka destroyed part of the hut. It has 91 beds, hot water and electricity, phone etc. and is open from May 1st till the end of October.