The overview description is described from the most northern part of group from Vrsic pass, 1611m, to the most southern part Luknja pass, 1758m. On this ˝trip˝ are mentioned all the mountains and the important places in the group.

The Razor and Prisojnik group is located in the middle of Julian Alps and it is between Mangart and Jalovec group, Martuljek group and Triglav group (see the Julian Alps page for more detailed map of subgroups). The group is located in the big ridge from Vrsic pass on the north side to the Luknja pass on the south side. This big ridge is separated on the many small ridges.

The first mountain above Vrsic pass is the powerful Prisojnik, 2547m with its beautiful north face where is the popular column Hudicev steber (Devils column), 2237m with big and narrow ravine Hudicev zleb (Devils channel). Then from the top of Prisojnik is in the SE direction big ridge that comes on the Razor, 2601m. Before Razor there is many peaks but they are not very important and they belong to the Prisojnik. Below the E side of this ridge is Krnica valley and on the W side is Mlinarica valley. From Razor goes the second ridge in the SW direction over the some important mountains such as Planja, 2453m, Kanceljni, 2133m and Golicica, 2108m. This is one of the hardest and the wildest ridge in all Julian Alps. From Golicica the slopes fall steeply down in to the Trenta valley and to the Soca river.

Below Razor is on the S and SE sides the big plateau called Kriski podi. Above this plateau are other main mountains of the group. On the N side is Kriz, 2410m. From Kriz is on the W side famous Kriska stena (wall). The next neighbour of Kriz on the N side of Kriski podi plateau is Stenar, 2501m. Then the ridge above Kriski podi plateau turns to the S direction and the ridge comes on the Dovska Vrata, 2180m (pass). From here the ridge continues on the Bovski Gamsovec, 2392m. From its summit the S ridge goes to the Luknja pass. The last mountain above Kriski podi is Pihavec, 2419m that is connected with Bovski Gamsovec with beautiful and hard ridge.

Here are mentioned the main summits. From not very important mountains in the group you must check the pages of main summits where they are described and mentioned.

West window (Prednje okno – Front window) of Prisojnik is the one of two windows in Prisojnik faces. It is very big and through it goes very hard ferrata.

East window (Zadnje okno - Rear window) of Prisojnik is on the other side of Prisojnik and it is not very visited because it is far away. Through it goes another ferrata.

Ajdovska deklica - Legendary Giant Girl's face is the beautiful "face" of girl in the north face of Prisojnik. Above this face goes hard ferrata through the West window of Prisojnik.

Utrujeni Stolp (Tired Pillar) is a nice and interesting rock that is lying on the other face.

Krnica valley is located on the west side of Martuljek group. The valley is beautiful, with stunning scenery. All around are some of the highest peaks of Julian Alps that fall into the valley with huge walls: Skrlatica (2740m), Rakova Spica (2545m), Razor (2601m) and Prisojnik (2547m). Krnica ends with probably most beautiful amphitheater in Julian Alps – Kriska Stena.

Trenta is by many most beautiful and most romantic valley of Julian Alps. It is certainly one of longest (around 22km), placed in the heart of Julian Alps, dividing them into western and eastern part. Its mouth or end is near the small town of Bovec where it enters Bovec basin. Through it runs the most beautiful Slovenian river, crystal clear Soca! It has amazing light blue – light green color and is very popular for rafting. Along the river there are few villages and hamlets. Largest and most beautiful are Soca and Trenta villages. Trenta is very deep valley. Some of the peaks rise 2000m above it. Trenta begins bellow beautiful Bavski Grintavec (2347m) peak. Its 5km long upper part, squeezed between Jalovec group and Trentski Pelc ridge is called Zadnja Trenta. This is wildest and most beautiful part of the valley. At the end of Zadnja Trenta, where valley begins to make 180 degree turn around Trentski pelc group is source of Soca river. It appears on the surface 100 meters above valley floor, coming out of deep hole filled with crystal clear blue water, surrounded by smooth and dark cliffs. A kilometer lower, at bridge over Soca and Limarica rivers, Vrsic pass road begins to ascend. Few hundred meters up the road is famous monument to Julius Kugy which as ever looking at Jalovec. This is one of most beautiful panoramas in Julian Alps!

Zadnjica is quite short (3.5km) subsidiary to famous Trenta valley. It begins at Trenta village and opens towards east. It gradually rises till its end at Planja (1000m). Bottom is mostly forested and there are few meadows. Around the valley is some of the most dramatic scenery in Julian Alps. The cliffs of Pihavec (2414m), Triglav (2864m), Kanjavec (2568m), Vrsac (2194m) and Ozebnik (2083m), which fall into dark depths of Zadnjica have no match in Julian Alps. They create amazing wall around the valley, which culminates with highest face of Julian Alps, that of Kanjavec, which is 1500m high! In the valley is dark and subdued atmosphere because walls around are letting very little sunshine in. End of valley is reached by road, which is closed to traffic 2km above the Trenta village.

The heart of the region is Kranjska Gora resort town, 84 kilometers from the Slovenian capital Ljubljana. Starting point for many mountain are Vrsic pass (12 kilometers south of Kranjska Gora), Vrata valley and Trenta valley.

For more information about coming on starting points you can read on the main pages of the mountains and on the nice overview page Julian Alps.

<---- Nice map of the Razor and Prisojnik Group. 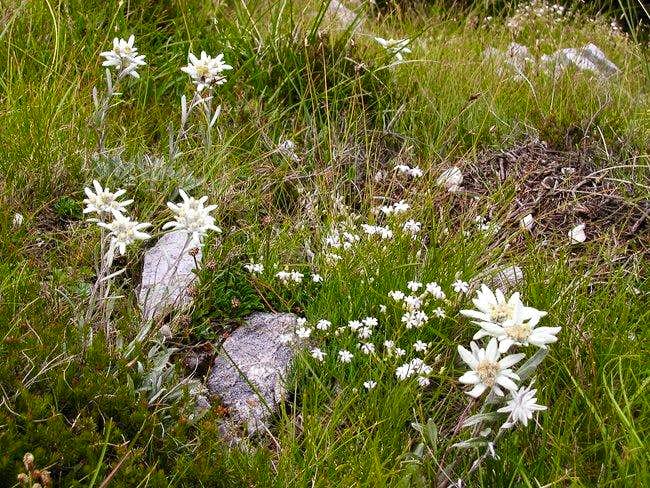 The alpine edelweiss are rare in this area. They are only on special and hidden places.

TNP is Slovenian largest national park, which is covering almost entire Julian Alps that belong to Slovenia. First ideas to protect this beautiful area came from Dr. Belar. He proposed, in 1908, 7 Triglav Lakes Valley to be protected. Because of land ownership problems it could not be realized. Finally, in 1924, on the area of 14 hectares, Alpine Nature Park was established in the valley, with time limit of 20 years. After WW 2 came the idea of true National Park. 7 Triglav Lakes Valley, together with Triglav, were declared Triglav National Park in 1961, on the area of 20 square km. But the true objectives of NP could not be obtained so finally in 1981, after years of preparation, true TNP was established. It was significantly enlarged to 838 square km with inner (542km square) and outer circle of protection. Park was named after Triglav, nation’s highest peak and symbol, which is almost in the middle of the park. As Julian Alps are mostly made of limestone, park area is exceptionally rich in various karst phenomena, including a special type of the mountain karst. It includes numerous valleys and peaks. All of Slovenian glacial lakes, except Bled Lake, are inside the park. Park is very rich with flora, which is mostly alpine but due to vicinity of Mediterranean climate there are some endemic species. Lowest point of the Park is only 180m. 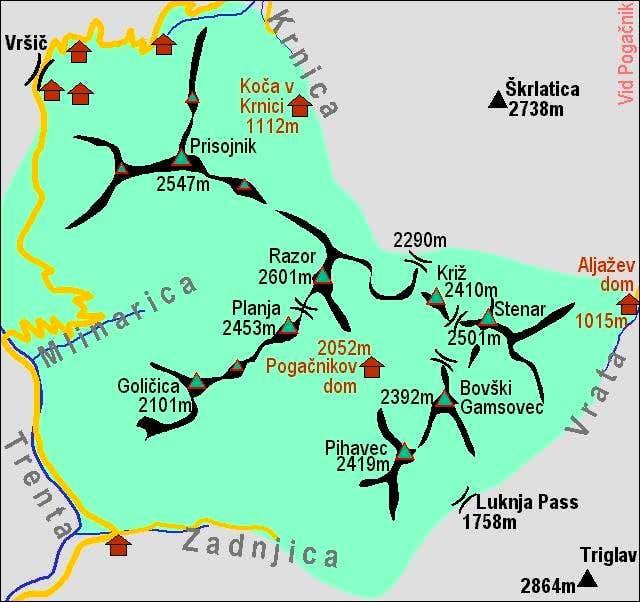