In memory of Tine Mihelic

This page is dedicated to Tine Mihelic one of the greatest alpinist and mountaineer of Slovenia who died when he was climbing the ridge Bovski Gamsovec – Pihavec. He died on the second of October 2004. He was found after four days searching action.

Tine Mihelic was born the twentieth of May 1941 and was the great climber, author of many books (specially of Julian Alps group, climbing books about Dolomites), mountainous publicist…

He climbed all over the world. He climbed many climbing routes in Julian Alps, Dolomites, Paklenica, and in the Andes (Cordillera Blanca, Cordillera Real). Many of them are paramount. If we count all his climbing ascends we come to the number around 1000.

He was the great man. Rest in peace! 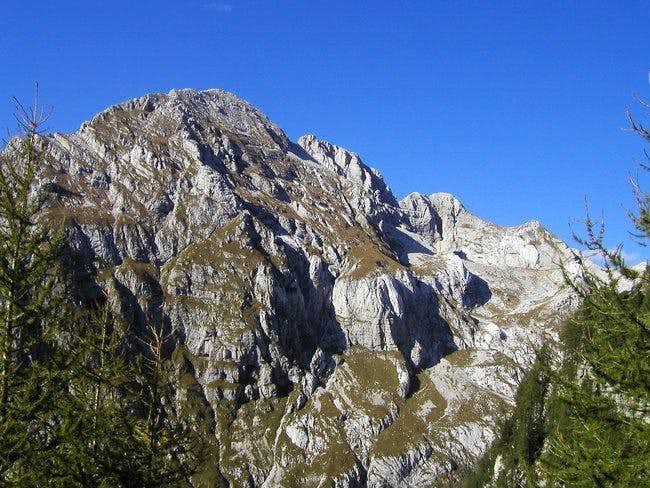 Beautiful south slopes of Pihavec from route to Luknja pass.

Pihavec and Bovški Gamsovec are the last mountains in Razor and Prisojnik group before Luknja pass, 1758m, and start of Plemenice ridge (NW ridge of Triglav). Pihavec is situated above Kriski Podi plateau where are three small lakes. On the plateau stands the Pogacnikov hut, 2050m.

Pihavec is the mountain, which has the most powerful view from Trenta valley (from the small second valley Zadnjica). The position of Pihavec is very good because it is in the middle of the highest mountains in Julian Alps. From the famous Triglav North face is Pihavec faraway only around one kilometer.

On the S and SW side Pihavec falls very steeply down to the Zadnjica valley. In the S way has nice grass ridge where is a small peak Mali Pihavec, 2185m. On the SE side Pihavec has some steep grassy slopes to the Luknja pass. On the NE side is connected with Bovski Gamsovec, 2392m with wild and hardly climbed ridge. On this ridge is another unimportant peak called Vrh nad Kamnom, 2365m. On the N side and NW side has small north face only around 300 meters high, which falls down on screes. These screes are part of Kriski Podi (the plateau).

The detailed map. Red spots are summits, posted on SP. You can see where Golicica is.

The heart of the region is Kranjska Gora resort town, 84 kilometers from the Slovenian capital Ljubljana. Starting point for Pihavec is Trenta valley (Zadnjica valley) or Vrata valley (the main valley below the Triglav). For more details about getting in Vrata valley see the summipost side ofTriglav and the section Vrata valley routes.

The normal marked route on Pihavec goes from Pogacnikov dom (hut) over Kriski Podi plateau and then over the small north face. The description of the route you can find here.

There are also some other approaches which are not so well-known. This are unmarked approaches and some climbing routes.

Around Pihavec. The route goes around the SE, S, SW and W slopes of Pihavec. It starts on Luknja pass and ends on Pogacnikov dom (hut). Some easy climbing parts. You must be good tracker. 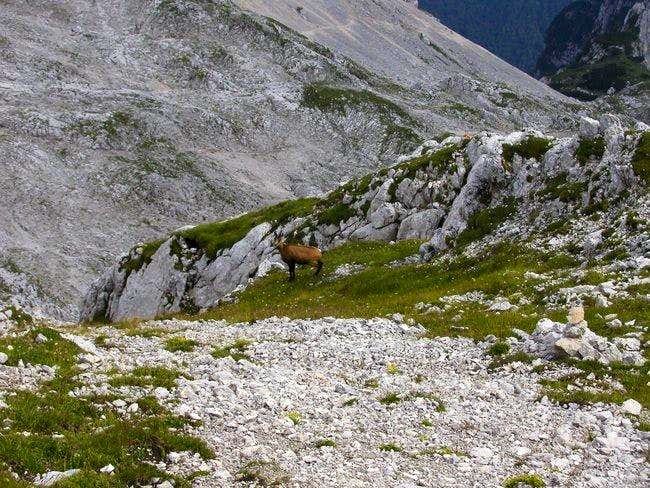 An Alpine chamois. You can find here many of them.

No limitations but Pihavec is located in the Triglavski Narodni park so you must be kind to the nature and other beauties.

The best time for climbing on Pihavec is Spring (be careful on some snowfields below the north face), not very hot days of Summer and Autumn.

There are only two huts: