Red Kaweah is the prominent high point in the center of the jagged section of the Kaweah Range. Anchored at the north end by Black Kaweah and at the south end by Second Kaweah (or Gray Kaweah), this saw-toothed portion of the ridge is composed of a number of vertical pinnacles in addition to the three peaks mentioned. Mt Kaweah, the high point of the entire range (at its far south end), is seemingly a departure from this magnificent serrated example of the High Sierra.

The first credited ascent of Red Kaweah in 1912 is attributed to Charles Michael, the assistant postmaster in Yosemite, who has a number of impressive first ascents to his name (including the highly technical pinnacle next door that bears his name). Red Kaweah is one of the 248 peaks on the Sierra Club Angeles Chapter’s Sierra Peaks Section list but only sees a couple of climbs a year. The register contains a veritable who’s-who of Sierra climbers – a goal that makes the ascent worthwhile. And the views are pretty darn nice as well. 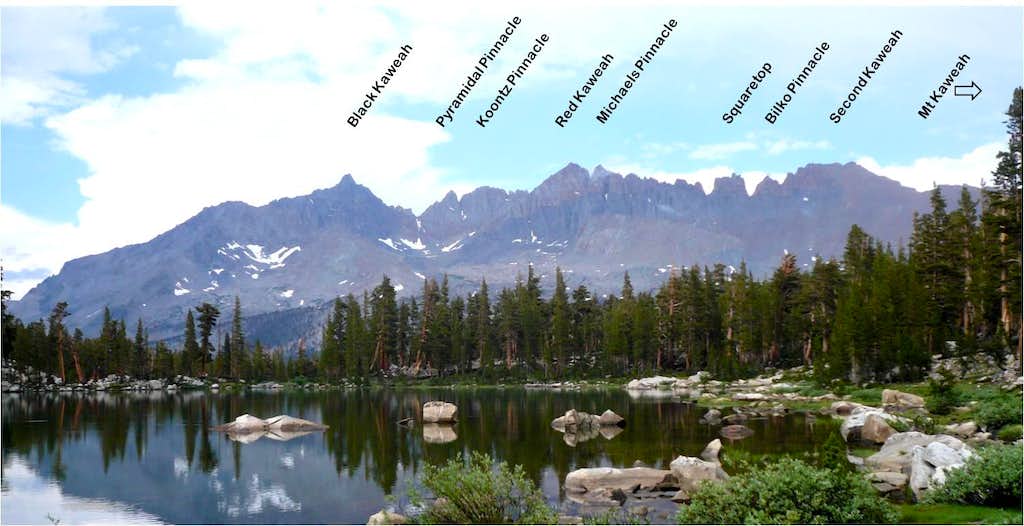 Red Kaweah can be approached from a number of different directions depending on the itinerary. The best place to begin the ascent is from the old cabin at the Big Arroyo. There may be other options but none as direct or easy. The closest trailhead approach to the Big Arroyo is from Mineral King, offering a couple of variations. Entry into this region is also available from the east or south, but it takes a lot longer. The Kaweah Peaks page provides directions for approaching the Big Arroyo from both the West and East. The Black Kaweah page is also an excellent source for various approach options, including a detailed description of the fastest approach. There is only one standard non-technical route up Red Kaweah but at least a couple of technical routes are described in the register. There are probably a few more undocumented technical routes but this is a mountain that begs for better and more interesting routes. The southwest face promises a number of challenging arête or chute climbs while the sheer east face (actually on Koontz Pinnacle) is graded at IV 5.9 with much loose rock.

Everything you need to know about permits, regulations, and driving directions can be found on the Climber.org page. While overnight hikes require a wilderness permit, day hikes can be done without red tape. The Big Arroyo is a perfect place to camp overnight for forays into the Kaweahs: bear box, flat camping spots, and plenty of water. Three miles further away (but closer to the trailhead) is the largest of the Little Five Lakes sporting the same amenities as the Big Arroyo.

Climbing can be done in almost any season but May through October are the most popular times. In heavy snow years, the chutes and slopes may hold residual snow. This is also true for any of the routes over the Great Western Divide or on the Kaweahs. Check for current NOAA weather. The Mineral King webcam page is also a good source for weather info.