Return to the Karwendel - Searching for the Eppzirler Scharte

Return to the Karwendel - Searching for the Eppzirler Scharte Martinswand
After a long holiday playing in the Alps, it was time to go home. Not too fast though, so, on my way north, I said my goodbyes to my friends and stopped at Zirl, near Innsbruck, to spend a few more days in the Karwendel. My lifeline on the klettersteig
My first goal was the Kaiser Max Klettersteig, a difficult aided climbing route on the Martinswand. I had read that the upper part was the hardest, but there was an exit from the route before that, at the so called Maximilian-Grotte.

The climb was a great experience, but as I got closer to the grotto, I judged that my arms were used up too much to continue safely, so I bailed out. I'll have to go back there some day! Memorial artwork along the trail
In the afternoon, I hiked through the Ehnbachklamm (klamm=canyon) up to the Solsteinhaus. I had called before to make sure they were open for business, because I new I would be arriving close to sundown and I wouldn't want to arrive at a closed hut that day.

As I got higher, there was a bit of snow left from the bad weather a few days back. It was melting and my feet got wet. I found out that my hiking boots needed some repairs, as some serious holes had started to appear.

At the refuge, I enquired about the surrounding peaks, notably the Erlspitze and Großer Solstein. The warden said there was still quite a lot of snow up there, and nobody had ascended them recently. That's a pity, but so be it, no summits tomorrow then. Instead, I decided to go over the Eppzirler Scharte, a high pass into the next valley.

Next morning, all the trails around the hut were clear. The sun was out in force and it promised to be a beautiful day. I donned my mountaineering boots and set off on the trail to the pass.

The trail gained altitude very gently, and the snow started covering parts of it. There were no footsteps. Apparently nobody had been here recently. As I approached the pass, things got interesting. More and more snow on the trail, until it was totally covered up by the time I approached the ridge that I had to cross. The trail markers, which were mostly stones on the ground with some paint on it, were nowhere to be seen. So, which way to go?
Ascending the deeper snow in the gullies was hard work, and I really didn't want to find myself forced to come down again and try the other one! My map didn't help either, it only showed one gap ...

After thinking hard about it, I came up with a plan so I wouldn't have to come back. I choose the right gulley, which turned out to the wrong one, but I didn't have to come back down anyway. Later that day I learned that the gully that I ascended leads to the Erlscharte.


How I solved the puzzle 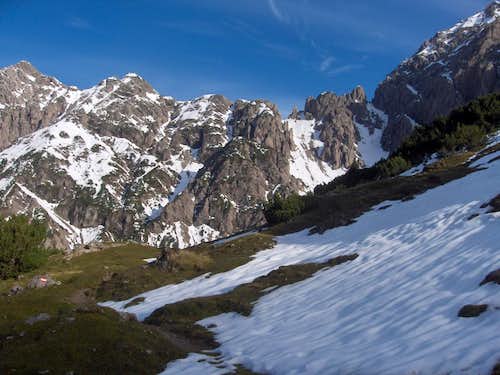 One of these two gullies leads to the Eppzirler Scharte, a gap in the ridge with a trail going over it into the valley on the other side. But which one? At this point, the snow isn't too deep and I can see the trail, but only a little bit further up, it's all covered in snow, and there are no footsteps to follow either. I'm the first one here since the last snowfall a few days ago.

Here is what I thought about this puzzle.

I knew there were steel cables from the Eppzirler Scharte leading to the Erlspitze, the mountain on the right of the ridge (the summit is outside of the picture). And so, I can go up either one of these two snow gullies, but which one to choose?

And so I headed up the right one, which, of course, was the wrong one, but, just as I had thought, I could follow the steel cable to the left one!

Are you still with me? Looking down the other side of the Erlscharte 
Back down in the safety of the valley, I enjoyed the hospitality of the Eppzirler Alm. They looked a bit surprised that someone had come down over the gap that day. ...to our discussion, Rob - this could also be a trip report. This is what I see:

> route page: objective information about the route.
> thip report: personal experience, how it happened.
> album: more or less collection of pictures.
> ... and other forms ...

Yes, I thought about making it a trip report instead of an album, realizing it's really something in between. It's a bit more than just pictures, and a bit short for a trip report. Hey, what do you know, that's another puzzle of which way to go ;-)!

This time however, I have no simple solution. In fact, on an earlier occasion, I also started an album with a bit of text explaining the circumstances, and only as I was writing it, I decided to change it into a TR.

As for creating a route page, I feel I would have had to go up to the Erlspitze from the scharte, then I would have something to contribute. As it is, I couldn't do more than write a reasonable description of how to get to the Eppzirler Scharte and Erlscharte. If there is no snow, that's real easy, just follow the marked trail. If there is a lot of snow, don't, because there will be avalanche risk. Only in between you'll have my problem of which gully to go up. And so, all that's left is the one picture that explains where to go when you cannot see the trail. But, to make it more useful, I've attached the album to the Erlspitze.

Yes, I see. Don't take this too seriously ;)
Sorry for teasing you.
Enjoy!
Vid