Karwendel like its neighbours Wettersteingebirge and Rofangebirge belongs to the Northern Limestone Alps. Mainly composed – you guessed it – by various forms of limestone the mountain range is notorious for its brittle rock and its huge scree fields. On the upside erosion created one of the most bizarre mountain ranges outside the Dolomites with huge near-vertical north faces, fine pinnacles and towers as well as fine alpine routes. Karwendel is a “difficult” mountain range. Thanks to the brittleness of its rock its climbs are far harder than they appear, even if you look at “objective” grades in guidebooks. A Karwendel UIAA III route might be graded V in other ranges. Also for hikers, the range offers few easy panoramic trails or easily accessible summits. Aside from the Soierngroup and the Karwendel Prealps most summits are hard and difficult to reach. Moreover access routes can be very long often making the summit experience a multi day affair with stopovers at one of the (many) mountain huts. The borders of the range are well defined by the rivers and passes around it.

To the south the range is bounded by the Inn River, to the west by the Isar River and Seefeld Saddle, to the north by the Isar River and to the east by the Achensee Valley. The group itself is made up of four long ridges which all run mainly from west to east. In addition a number of smaller, often horseshoe shaped subgroups are set around it. To the north-east the hill-like Karwendel Prealps fall off against the Isar River. The origin of the name Karwendel is a bit of a mystery. Today it is believed that it stems from an old German family name of the area, Gerwentil. At first the name was only used for the Karwendel Valley and its surrounding summits, a valley which in former times belonged to a family of tat name. On the other hand there is the similarity of the name with that of the eastern Karawanke range, so that the Slavic gor for mountain might also be one of the roots for the name.

By wuedesau The Karwendel mountains mainly consist of limestones,dolomites and subordinate sandstones, marls and volcanic material. The sedimentation of these rocks started about 240 million years ago at the beginning of the Triassic period when the huge continent Gondwana broke up (the African continent started to drift to the south) and a large ocean called Tethys formed. This ocean extended from the Pyrenees till South-East Asia. At the beginning Tethys was narrow and the surrounding land was characterized by hot and dry climate. In this time mainly sandstones (Buntsandstein) were deposited that can be found at the base of Karwendel. But soon this ocean got wider forming undersea basins and highs.

Mainly carbonates were deposited from that time on (Alpiner Muschelkalk). Large reefs and lagoons developed. The Wetterstein limestone that builds up large parts of Karwendel is a result of these reefs that grew near the African coast, far from the actual position. Between the reefs and the African continent dolomite was deposited in a very shallow sea. This dolomite today is called Hauptdolomit (main dolomite) which is widespread (especially in the northern part) in the Karwendel. At the end of the Triassic the Tethys Ocean became a deep sea and the reefs disappeared. Clays and radiolarites (composed of radiolarians with a siliceous skeletons were deposited. Due to the high water pressure all imestone that was transported into the deep sea was dissolved. At the end of the Jurassic time, when Tethys almost had the size of the Atlantic ocean, Africa and Eurasia started to converge and the closure of Tethys began.

The up to 10 km thick sediments that covered the ocean floor were folded and later when the process of narrowing proceeded the rigid carbonate platforms were stacked on top of each other. Marine sedimentation still continued during Cretaceous times. The main mountain forming process took place during the Tertiary. The Northern Calcareous Alps including Karwendel were thrusted over the central part of the Alps onto the European continent. Today the reefs that grew in front of the African coast can be found at the northern margin of the Alps. Today the Karwendel mountains are mainly composed of Triassic rocks. Sediments of the Jurassic and Cretaceous times have been been widely eroded and are preserved in synclines only. The actual appearance is a result of tectonic processes (mountain chains and valleys follow synclines and anticlines or tectonic faults) and erosion. During the last ice ages U-shaped valleys and large cirques were eroded. The characteristic rock fans were formed after the last ice age.

The map above gives an overview over the ranges, the list below shows the already submitted mountains within their respective subgroup. 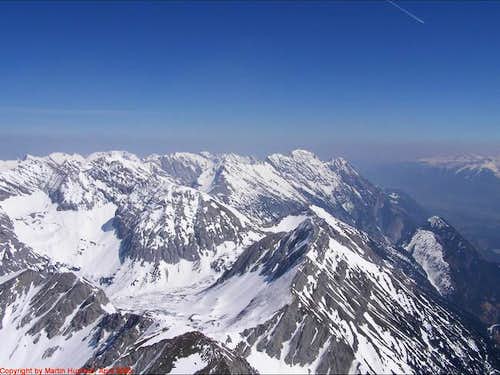 The Inntal Chain and the eastern Karwendel Ridges seen while paragliding

Composed of two subgroups, the horshoe shaped Erlspitze Group and the Inntalkette (chain) this is the southernmost of the Karwendel subgroups. The mountains tower directly above the city of Innsbruck.

Located to the south-west of Karwendel the Erlspitze Group is formed like a horseshoe which encircles Eppzirl Valley. The highest mountain, Erlspitze, is towering above the valley end with its massive north face. Like everything else in Karwendel this subgroup is made of very brittle rock, in this case main dolomite. 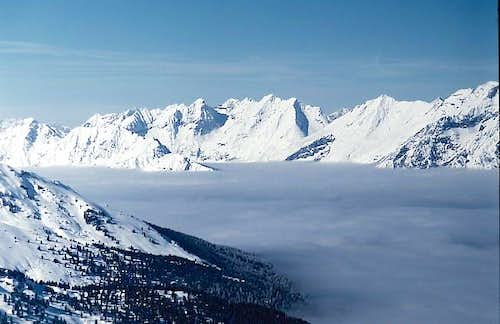 Located to the north of the Inntal Chain, The Gleiersch Halltal Chain also runs in west-easterly direction and is separated by the Gleierschbach and Halltal Valleys. The chain is divided in two parts by Lafatscher Joch (2085m). The mountains of the chain reach comparable elevations too and Großer Bettelwurf in the eastern end of the chain is its highest summit. In all the chain is 26km long. Like for most ridges of Karwendel the north faces are steep, almost vertical while the southern ones are shallower.

The third ridge as counted coming from the south this ist he longest ridge of the whole range. It runs for 40km in west-easterly direction slightly drawing southwards. It is also the only subgroup which consists of more than one single ridge. Multiple side ridges run off to the south and south-west while to the north you’ll only find very short ridges in the western part of the subgroup. Access routes to most of the mountains are very long. The range is home to the source of the Isar River which on its way to its confluence with the Danube runs through Munich. The highest summit of the subgroup as well as of all Karwendel is Birkkarspitze (2749m). 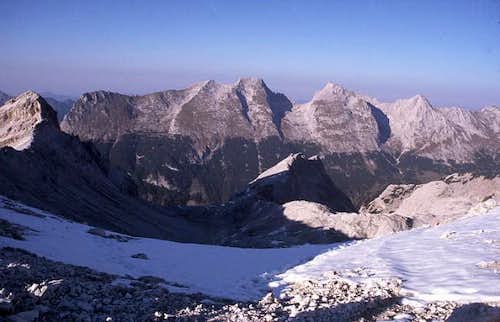 Central part of the Northern Karwendel Chain as seen from Seekarscharte

The northern chain of Karwendel is a 16km long ridge which at firest (in the west) runs from south to north where it bends eastwards. Here – like anywhere in the range – the north faces are steep, almost vertical. The border between Germany in the north and Austria in the south runs along a large part of the ridge. At Östliche Karwendelspitze, the subgroup’s highest mountain at 2537m, it leaves the chain bending northward.

To the north-east of the Karwendel main ridge, somewhat south-east of the northern chain there are a number of smaller subgroups which all are more or less compact and separated by deep valleys. Here they will be grouped together in one subgroup although in literature they are treated separately. 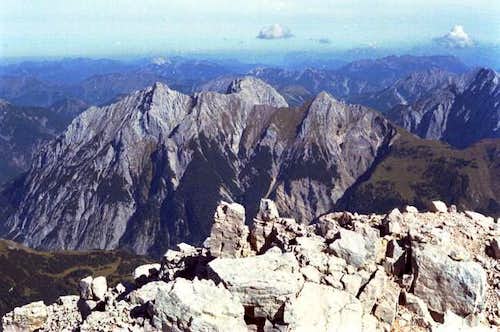 Small and horseshoe shaped this range is located east of Östliche Karwendelspitze and north of Laliderer Spitze. The highest summit is Laliderer Falk at 2427m.

The group around Soiernspitze (2257m) again is a horseshoe shaped range open to the north. It is located in the north-west of Karwendel. It is lower than the other subgroups and is not as wild looking. Therefore it is a good hiking destination, as any of the summits can be reached by regular folks.

Hi Michael, looks like the other Michael beat you to it ... http://www.summitpost.org/stanser-joch-ochsenkopf/475006 Cheers Gangolf