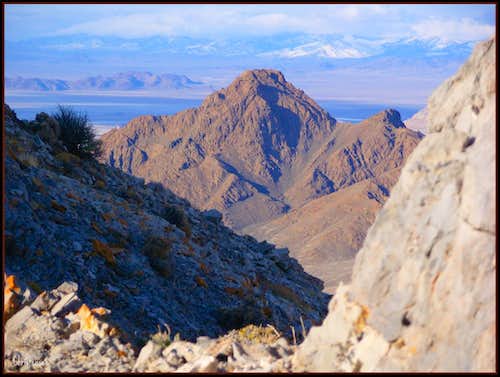 Have you ever driven that stretch of I-80 that goes from (or to) Salt Lake City Utah to the Nevada border at Wendover? Did you wonder about the mountains that were just north of the Bonneville Salt Flats or did you just notice the Salt Flats? Its a lonely stretch and one that makes drivers speed up just a bit to get it behind them. The Bonneville Salt Flats are famous for world speed records of cars, motorcyles, and anything else with wheels that will go fast. That is all fine and good, but its the mountains behind the Salt Flats just to the north that I care about. The Silver Island range is a place I would love to spend a week exploring and climbing in. Most people don't know it, but encircling the whole range is a 54 mile road known as the Silver Island Mountain Backcountry Byway. Stay tuned, I'll have a whole section just dedicated to more information about this unique road before too long. For now, I have some basics listed.

Seasons: AVOID SUMMER unless you like temperatures in the 100's. Spring and fall are generally nice but winters can be very cold. 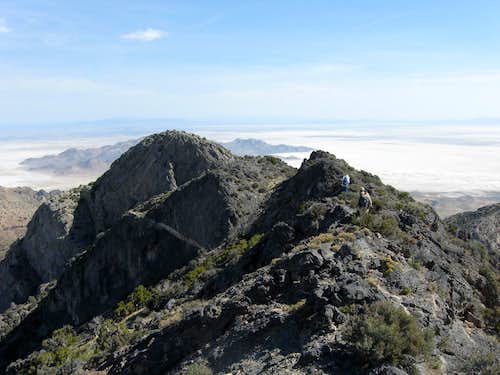 Heading down from Grahams summit 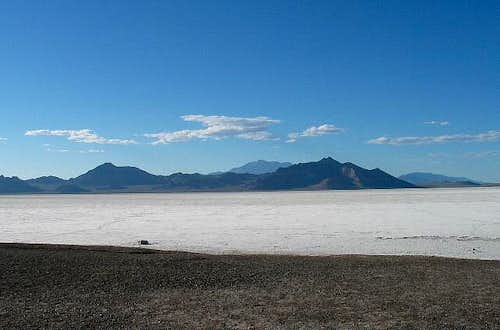 From I-80, you get a great view of the Silver Mtn range

If you get to Wendover Nevada/Utah, (120 miles from Salt Lake City) go east a bit to exit #4 on I-80 and turn off andhead north on a paved road for 1.8 miles. You'll see a sign that indicates the Pilot and Silver Island Mountains straight ahead and the Bonneville Salt Flats Speedway to the right. Continue on for 0.8 miles to another intersection and turn right to the Silver Island Mountains. You'll notice an information board and register just off to the left and I recomend that you stop and read the sign and sign the register. Its important that the BLM knows how many people use the road so that maintainance $$ can be allotted.

From here the road forms a loop that encircles the range and is about 54 miles in length so make sure your gas tank has plenty in it. The road is well graded dirt and most 2WD vehcles would be fine on the road as long as they have high enough clearance. Any road leading off of the main road might require 4WD. Avoid this area during or after rainstorms as it can turn to mud and the ruts you create will mess up the road and you might get stuck. The road is open year round otherwise.

Red Tape and a bit of History

HISTORY
The Silver Island Mountains have seen mountain men, explorers, and wagon trains cross its peaks and valleys. Pilot Peak, eleven miles to the northwest, was named by John C. Fremont in 1845. This mountain peak became a beacon for later travelers passing through the area. The Donner-Reed Party attempted this route on their way to California but abandoned their wagons in the soft mud east of here. You can see part of their fateful route near Donner-Reed Pass. Actually the Donner party passed between the Silver Island range and the Crater Island range that is just a bit northeast and easily viewed from the road east of Cobb peak.

Almost everyone is aware of the world records set at Bonneville International Speedway and the world has been coming to this area to test their machines for speed since the 1930's.

GEOLOGIC BACKGROUND
These mountains are made from limestone sediments from the bottom of a long vanished sea. The Silver Island Mountains were partially submerged by the melting ice age glaciers that created Lake Bonneville, whose shoreline can still be seen etched on the slopes of the area. After the limestone layers were raised high enough, volacnic activity covered them with lava flows such as can be seen at Leppy Pass and Volcanoe peak. Indians were noted to be in the area over 10,000 years ago. Fossil remains are found readily on the mountains of the area and wildlife of the area today consists of reptiles, coyotes, birds and small rodents.

More will be added as I find it.

The Peaks of the range 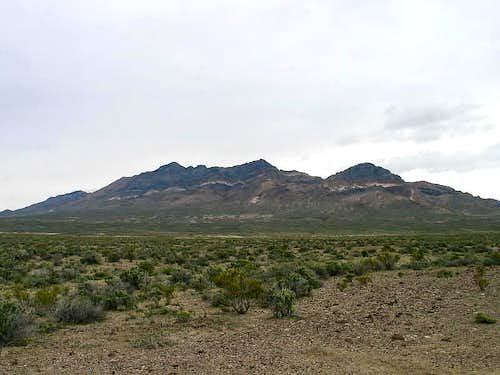 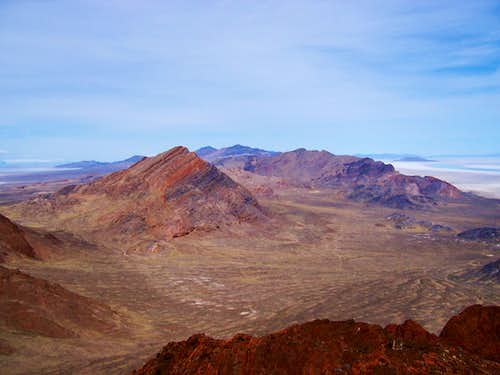 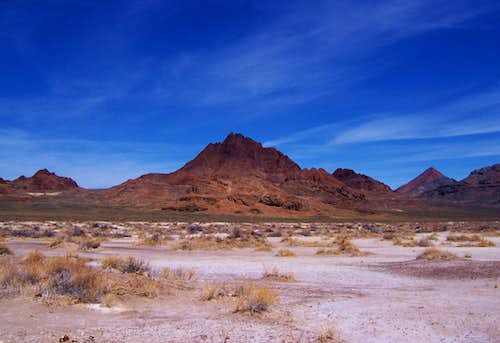 Graham Peak is the highest peak in the Silver Island range and isn't often attempted as it is a rugged and challenging peak even though it stands but 7563 feet high. Graham ranks #37 on the Utah Prominence peak list

The following are the peaks over 6000 feet that are worthy of attention:

A nice peak to the West of the Silver Mtn range is Leppy Peak.
Leppy Peak 6,716' 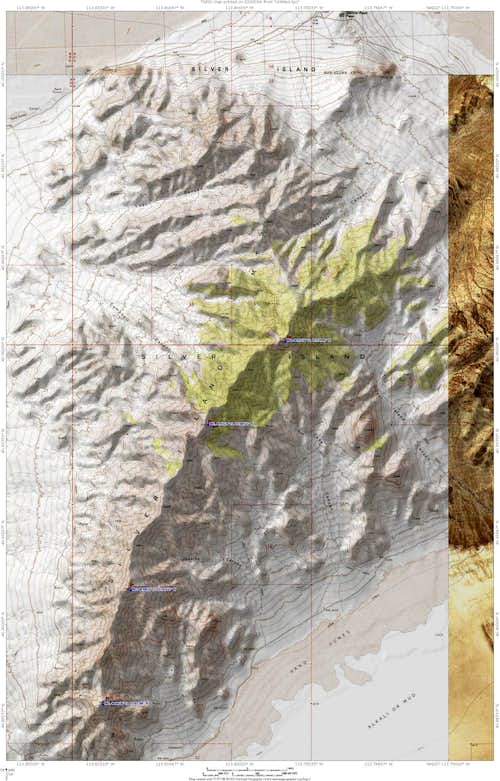 This map will get REAL big if you click on it. 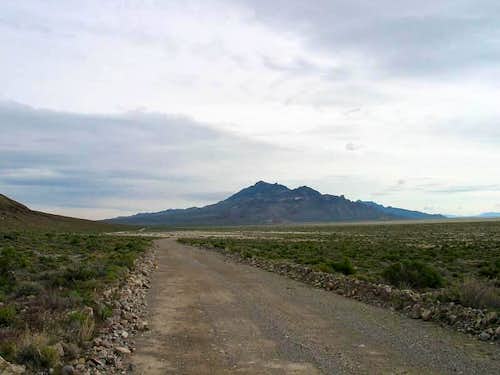 Primitive camping allowed if you can find the spots.  There is of course, plenty of motels in nearby Wendover along with food, gas and supplies. If you would like to save your money for the slot machines, you can camp in the Silver Island area as there are many primitive campsites as vehicle camping is permitted within 100 feet of the road. 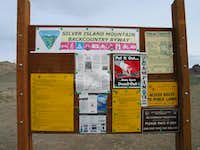 Sign that greets you as you enter the Byway 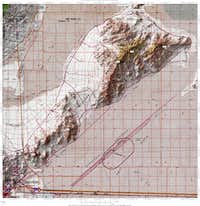 From Utah Byways (see link below), page 36, there is this tidbit of information about the Byway.

"At mile 11 you will see the left turn to Silver Island Pass, which bisects the range. By mile 25, you're angling west. At 33.5 you may see a signpost marking the Hastings Cutoff, a pioneer route. At mile 55 the road rejoins the Leppy Pass road. Go left to return to I-80 and Wendover"

The road is best traveled going counter clockwise which is what the mileage that the Utah Byways description above is based on. The Utah Byways book also has a simple but useful map

I would like to climb at least Graham Peak and explore the area more as well as climb nearby Pilot Peak to the west.

TRIP REPORT worth read. Has some neat pics.

For more great pics of this range, check out the Volcano and Lamus Peak pages at the left.

Floating Island is connected to the Silver Island range by a causeway (access near Cobb Peak end), this is another area that is worth exploration. See this link for some enticement.

On the northward side of the Silver Island range, Crater Peak is one of the places I'd like to visit as it has some prominence and would be an adventure to just get to. (Dean)