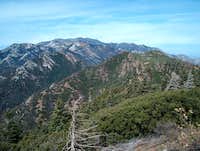 Spitler Peak is a prominent peak along the Desert Divide, it can be spotted from anywhere in Idyllwild or Garner Valley. The Desert Divide is the lower section of the San Jacinto chain of mountains that belong to the San Bernardino National Forest. The summit lies within Riverside county and just outside the San Jacinto Wilderness boundary. The Pacific Crest Trail(PCT) runs along the crest of the Desert Divide. The contrasts are stark, and the austere beauty makes this place a favorite of those who travel here. This area is not frequently visited and is a good place to bring dogs.

There are two direct routes to Spitler Peak, one from the immediate north, and the other from the south. Both junction with the PCT and follow a short mountaineer's route to the summit. There is very easy scrambling/bushwhacking involved.

The Desert Divide is very hot in summer and the exposed routes that climb to the PCT can get early morning sunshine and heat any time of year, bring lots of water, and be prepared for all sorts of weather. 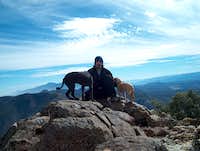 Take Highway 74 or 243 to Mountain Center, and head east on Highway 74 for 3.4 miles. Turn left onto Apple Canyon Road which is signed for Hurkey Creek Park. Head up the paved road for 2.6 miles. A turnout and sign for the trail are on the right hand side. Park in the large pullout along the road just south of the trailhead.

The trail was reworked and does not appear accurately on topo maps. It begins in a very arid desert ecosystem and quickly climbs into what was once a mixed oak forest. The forest burned almost entirely in the 2013 Mountain Fire and is now an eerie landscape of burnt oak and manzanita with desert scrub and chaparral regrowth everywhere. The initial mile is relatively flat, but it begins to gain elevation while switchbacking up to the PCT which sits two thousand feet above the trailhead. From the creek crossing, the trail grows steeper until it nears the PCT. At the PCT, turn south(right) and head towards the summit. A cairn and a small use path head towards the peak a little over a quarter of a mile beyond the junction. The remaining pines which used to cover and surround this summit still heartily cling to the eastern slopes of the peak. 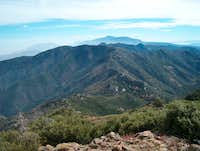 Take Highway 74 east for 2.9 miles past the Lake Hemet Campground and store. Turn north (left) onto Fobes Canyon Road, which is a nearly hidden dirt road barely marked with a sign on a fence. Keep on the main road - always go up. The parking area and trailhead is no longer signed, but there is a turnout 3.6 miles in before the gate to Fobes Ranch, private property, which once belogned to 60's LSD guru, Timothy Leary. Park in the turnout. The trail now begins on the dirt road which quickly turns into single track trail.

The Fobes Trail along with the Cedar Springs Trail are the two easiest ways up to the PCT along the Desert Divide. The Fobes Trail only climbs 800' to reach the PCT, but it is a bit steeper than the Spitler Peak Trail. At the junction, turn north(left) and climb sharply up 1000' feet in a little over a mile. Watch for the cairn after you pass the peak to its northeast. At the highpoint of the trail turn left and head up the mountain.

Adventure Passes are required for parking in all of Southern California's National Forests. 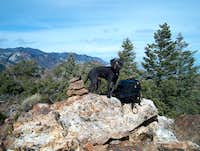 No other permits are necessary.

Mountain Bikes can travel any of the trails, but they may not use the PCT

Undeveloped Cedar Springs Campground is four miles south of Fobes Saddle and sits among a nice stand of lofty Ponderosa Pines. It is a favorite of horseback riders and Boy Scouts on short backpacking trips, though it is rarely used.