Named Lily Rock in 1898 by a USGS team; it has been thought that this was possibly for its lily-white appearance. But T.W. Patterson of Riverside has seen an old photograph of Lily Eastman, on the reverse of which is written "She was the one for whom Lily Rock was named". Lily was the daughter of Dr. Sanford Eastman, the first Secretary and a Director of the "Southern California Colony Association" which later became Riverside. She was much admired locally for her grace and beauty. She and her father, both suffering from tuberculosis had come to Riverside for their health, but she nonetheless died young and was mourned by many. How the USGS could have become aware of her is unknown.

It had previously been known as "Taukwitch Rock" (by area pioneers) and allowing for many variants in spelling, "Tauquitz" is still its preferred name by rock climbers. According to Indian legends known throughout Southern California, it was believed to be home of the Nukat (an elemental creature of primal evil) "Tahquitz". Included in his activities, Tahquitz loved to do great harm to people and much enjoyed stealing them and/or their souls which he would then take home to eat. His home was said to appear to be a large rock from the outside but was transparent from the inside "and the people he has stolen can see out of it as plainly as we see through glass". There is no verifiable explanation for the official change of name except that either the USGS didn't know about any earlier name, or more likely simply didn't want to name everything in the vicinity with the name of Tahquitz. The antiquity of this name is attested by Chief Francisco Patencio of Palm Springs who recalled that according to legend "Evon ga net" (the Fox) had set the boundary line for his people and named all places within their territory, called this great rock "Tahquitz wayo ne va" meaning "Tahquitz standing". This also was a sacred spot where local shamans traditionally came to cache or recharge their magical gear.

Tahquitz Rock nearly symbolizes the earliest history in technical rock climbing in the United States. This statuesque monolith of granite provided a breeding ground for modern free climbing beginning in the mid-30s and extending through the 70s with the introduction of specialized climbing boots.
Tahquitz Rock is visited by climbers from all around southern California and frequented by foreigners as well. Routes range from traditional style 5.0 to 5.12c sport, with a bit of everything inbetween. Many multi-pitch routes as well as single, which in many cases have bolted anchors suitable for rappeling (single pitch routes only, please!). 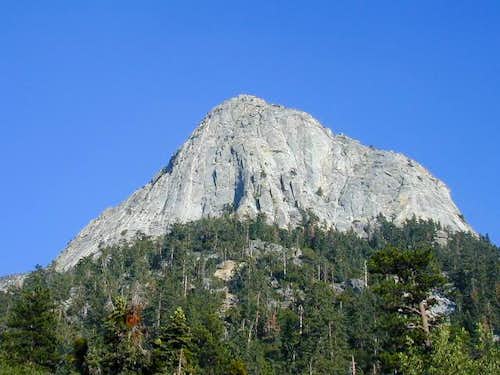 Located above the mountain town of Idyllwild in San Bernardino County, on the western slope of the San Jacinto mountain range. This quaint and quiet hollow sits at 5300' with an elevation gain of 1000' to Humber Park trail heads, approx 6300'.

Once in Idyllwild, follow North Circle Drive to Humber Park where the road will circle around through roadside parking and toilet facilities. 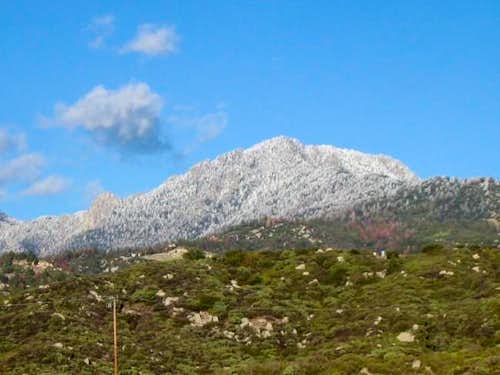 From Hwy 74, Tahquitz Peak and Tahquitz Rock are welcoming. 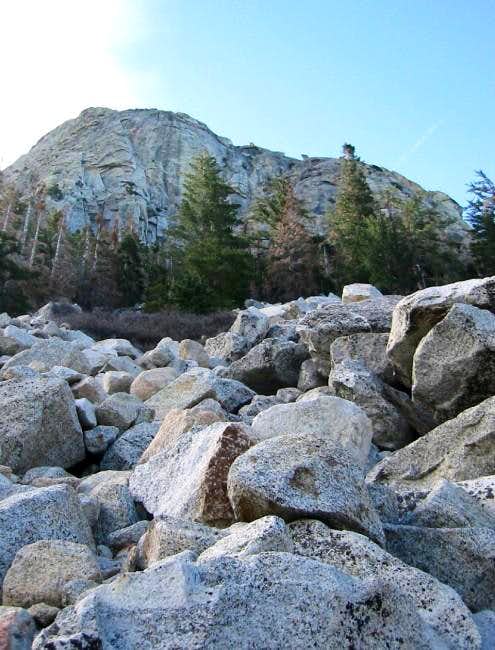 From Humber Park (after you have displayed your Adventure Pass in your windshield), skip down the Ernie Maxwell Scenic Trail for approximately 10 minutes. Maybe half a mile of beautiful running stream, various birds and downed trees, you will reach a large boulder on the right of the trail. Immediately across from this boulder is the climbers' trail switchbacking up to the base of Tahquitz Rock. This trail leads very close to beginning point of "Fingertrip," but options for exiting to head for the talus highway to hit routes on west face are available.

For routes along southern portion, or eastern face, continue along switchbacks to base of rock and skirt along to your right to reach desired location. A complete loop around Tahquitz Rock can be made if you never exit the trail and continue, and dumping you into the "North Gulley" for beautiful views and fun Class 3 action.

Idyllwild weather is temperate throughout the year with extremes experienced mid to late summer and the latter part of winter. Optimum period for technical rock climbing is May to October, but either end may produce favorable weather. November tends to be wetter with early morning dip in temps. Depending on severity of the chronic SoCal drought, snow and ice will typically be seen early December. Climbing can still be done with extreme caution and lots of gear!
Ice climbing is also possible in Feb/March, although not consistent season to season.

Hardcore technical grunts in the summer, if you're good enough.

Ice climbing in Feb, if you're lucky.

Getting down once you get up!

The most popular method of descending once summitting Tahquitz Rock, is the Friction Descent on the southern side of the rock. This is a 4th class scramble that requires some nerve and moderate technical ability to avoid an epic retreat. If you are unfamiliar with the descent, do not attempt; continue your scramble to the summit of peak and take the foot path down along rock's edge.

Once you summit from western and southern face climbs, head up and to your left on slabs along the ridge line of the rock. There is a huge boulder that you must manuever around to the far side of the boulder to a ledge. 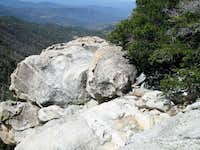 Boulder to look for on Friction Descent.:

You will pass a cropping of manzanita which use to house a Stokes' litter, but I haven't seen it there for years as it now resides at Lunch Rock.  Keep to your right and traverse down ledges and ramps for about 50', then move across ledges on the left down to slabs to base of cliff. Here you will see a heavily traveled trail that skirts along the rock, keep to your right and close to rock, continuing to desired location at start of routes or exit trail by Lunch Rock. 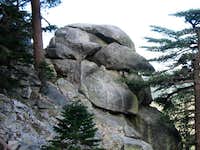 The Friction Descent is precarious in many spots, under unfavorable weather conditions you may find yourself experiencing frustration and panic. Keep control of your senses and locate reasonable spot to rappel.

On the matter of rappeling, if your intention is to multipitch to summit, refrain from rappeling back to the base as Tahquitz can be very busy during summer months, several climbing parties may be on the same route. For single pitch climbs, rappeling only makes sense, be polite and inform your climbing party neighbors what your intentions are. And don't forget your helmet!

Camping is not permitted at Humber Park nor on the trails to Tahquitz Rock, although many climbers spend the night in, or next to, their vehicles in the parking lot. Running water is not available at the trail heads.

There is ample camping available in the town of Idyllwild year round. Idyllwild Park is just west of Idyllwild on Riverside County Playground Road. Price is $15 a night with hot showers for a nominal fee. (909)659-2656

If day hiking Ernie Maxwell Scenic Trail, you are not required to have a hiking permit in your possession.