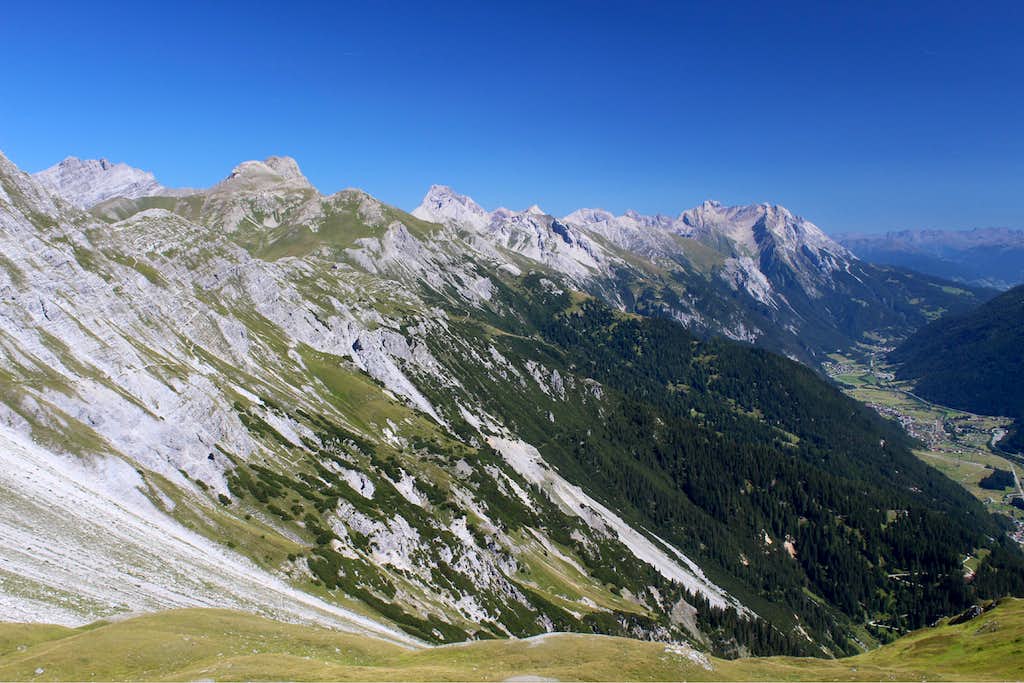 On the north side of the Stanzer Tal runs a continuous stretch of high mountain terrain known as the Lechtal alps.

These mountains can be traversed by utilising the network of high level, long distance footpaths that connect the many huts in the region with the valleys.  One of the peaks along the way is the Stanskogel, a fine and technically easy objective for a day out in the mountains.

By car from Innsbruck

Take the motorway A12 westwards for about 1 ½ - 2 hours passing first Pettneu, then St Anton.

By car from Bregenz

South on motorway A14 to Bludenz, then eastwards to St Anton and onwards to Pettneu.

ByTrain from Innsbruck and Bregenz.

It’s possible to get many trains on the main line into St Anton from the above but check the timetable locally. Not all trains stop at St Anton.

There are regular buses from St Anton travelling eastwards down the valley (past Pettneu) to Landeck and back.

From the west (Bregenz), it may be necessary to change buses at Zurs or Lech to continue on to St Anton.

From the west to Hirshpleiskopf 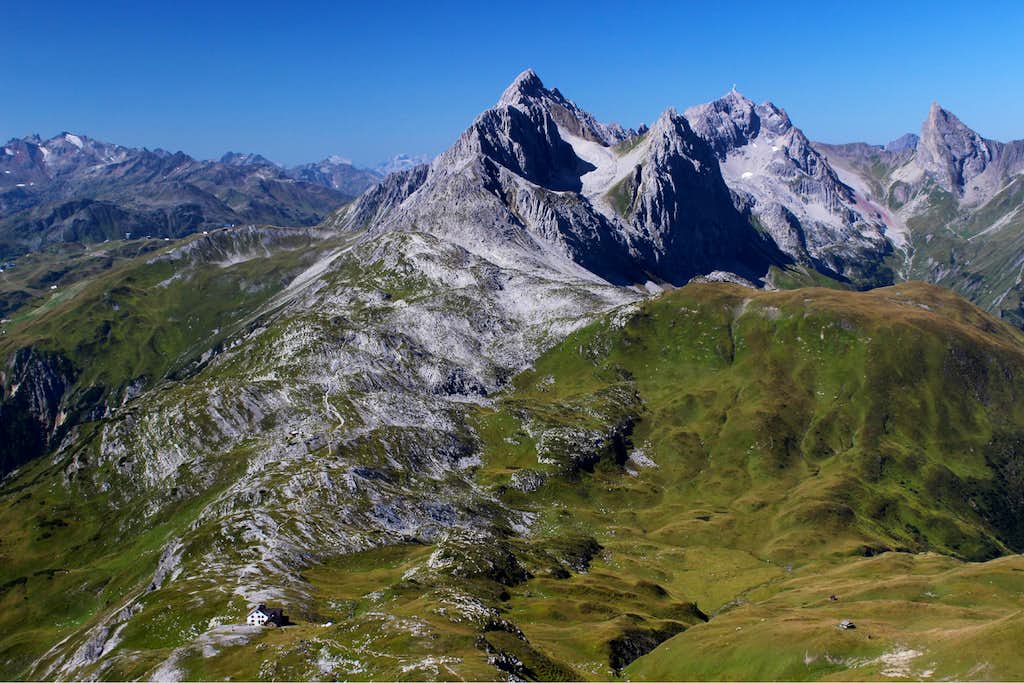 View from the Hirschpleiskopf, looking westwards. The Weisschrofenspitze and the Valluga are the prominent peaks with the Leutkircher hutte in the left foreground.

This 1026m of ascent can most easily be undertaken by getting the chairlift from St Anton to Gampen and then onwards to Kapall. Check the timetables locally as these do not run every day in the summer.

Alternatively, it is possible to walk on paths numbered 6,10 and 26 up to Gampen, then no 25 up to Kapall. Bear in mind, this is likely to add approximately 2 1/2 – 3 hours walking to your trip.

From Kapall, the footpath takes a gradually rising traverse eastwards on path no 601. There is a short, cabled section on this route but nothing that requires Via Ferrata equipment. There is also a parallel route higher up that takes a little longer, these routes converge near the Bacherspitze.

Once the Almajurjoch is reached, the Leutkircher hutte is visible from a long way off, set on a rise in the path and enjoying great views of the whole valley and with the Hoher Riffler prominent on the south side. The Stanskogel is one of the mountain tops visible behind the Leutkircher and a little to the north of the main path.

It is also possible and more direct to walk up to the Leutkircher hutte from St Anton on path no 642 in approximately 3 hours.

The route continues along the main path no 601. It gains height as it continues through green alpine hills towards the Kaiserjochhaus, the next hut along the way.

However, before this we reach a signposted junction about 30 mins after leaving the Leutkircher hutte. The route heads north – eastwards on a path taking us in approximately 45 minutes to a viewpoint at the Hirschpleiskopf, a grassy top with superb views back along the route already traversed and beyond.

After this, continue upwards but look out for the signpost indicating the route coming up from the Kaiserjochhaus.

From the east to Hirshpleiskopf

There are no cable cars or chairlifts here.

The best walking route is to head north – west from the village on path no 641 through the wooded section of the path and later on the open hillside, all the way to the Kaiserjochhaus. An ascent of 1082m, taking approximately 3 hours.

From here, head westwards along path 601 for a little over an hour. On your right hand side, a steep route ascends the hillside to join the summit path above the Hirschpleiskopf.

Continue the ascent northwards to another grassy viewpoint showing the last part of the route.  Looking northwards again, there is a splendid view of the Fallesinspitze.

Here, the character of the route changes from grassy alpine pastures to a more barren and rocky environment.

Descend eastwards a little along a narrow gravel path with a steep drop to your right. Then, ascend a short cabled section and cross the spine of the mountain onto the north side. Ascend a barren path across an open hillside to a top. This looks to be the high point of the route but the cross and summit point are nearby to the south, overlooking the valley and a spectacular view of the Hoher Riffler opposite. The summit is at 2757m. 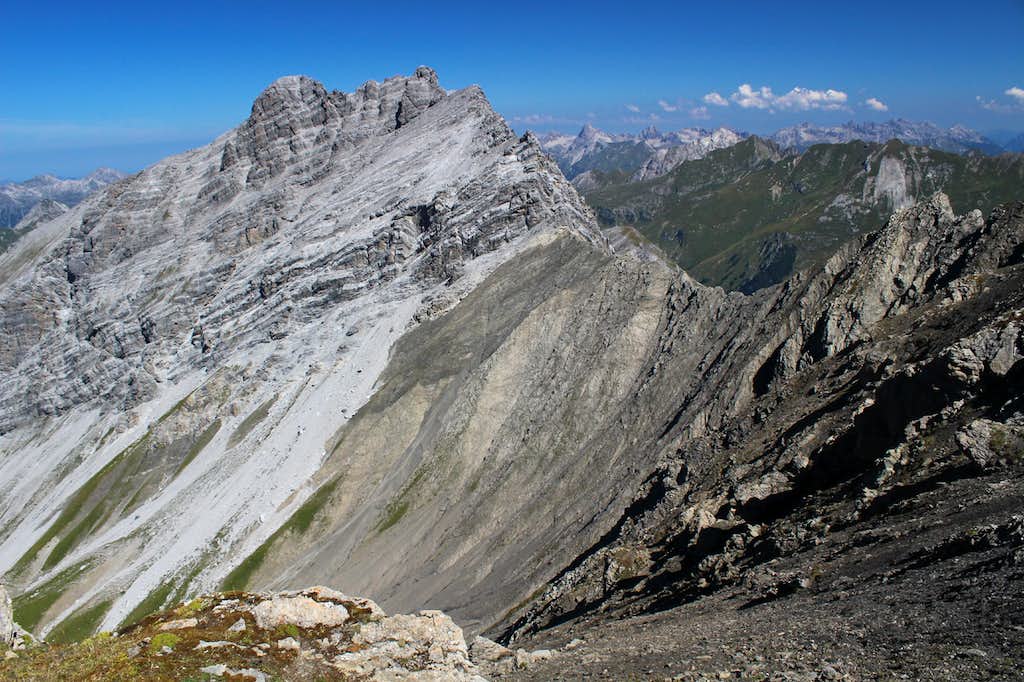 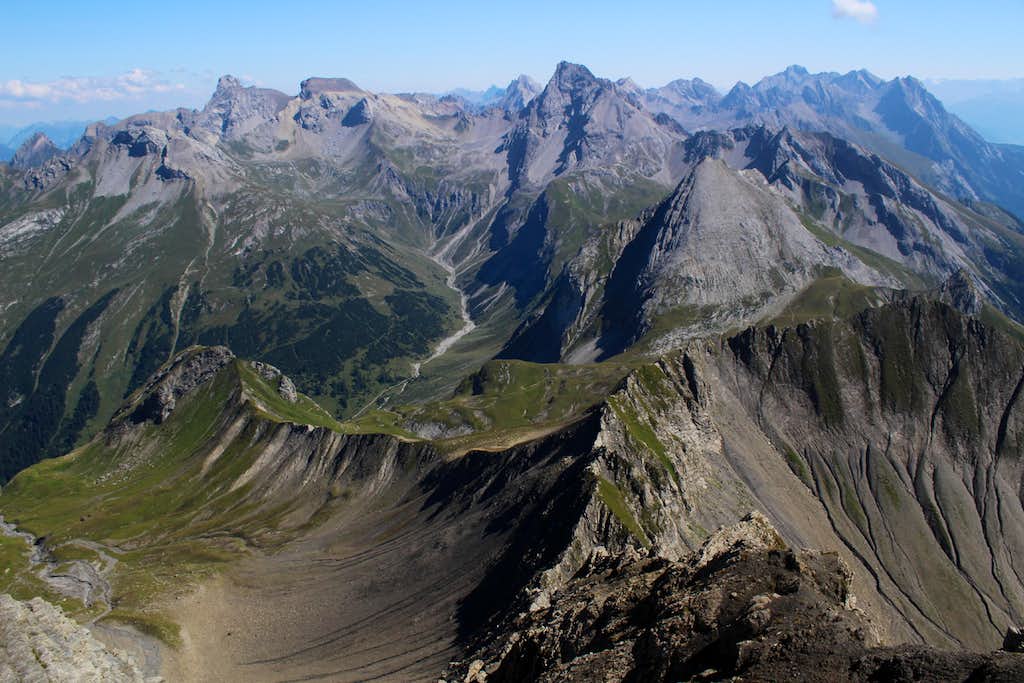 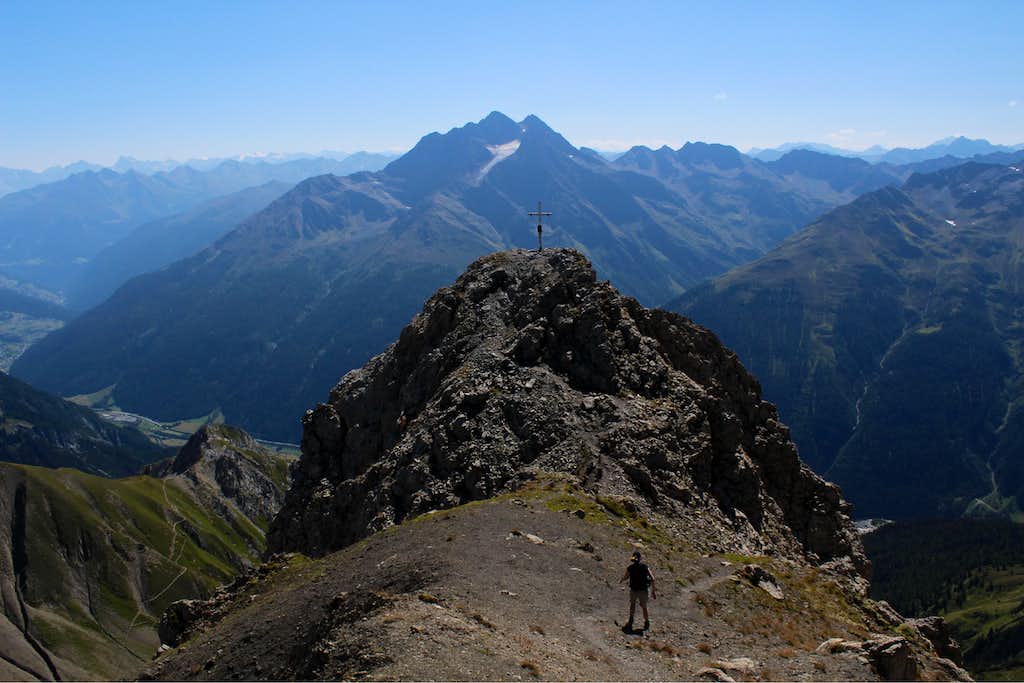 The Stanskogel summit cross. The Hoher Riffler is in the distance.

Descend the route by re-tracing your steps all the way to the path that descends towards the Kaiserjochhaus, just before the Hirschpleiskopf. Descend here if it is your intention to go there.

Alternatively, continue over the Hirschpleiskopf and return to the Leutkircher hutte.

From the Leutkircherhutte, it’s possible to return to the chairlift at Kapall for a quick and easy descent to St Anton – take care you are aware of the last running times of the chairlift though!

Alternatively, you could walk down path no 642 back to St Anton.

Unfortunately, there is only one choice of descent route from the Kaiserjochhaus and that is to descend path 641.

These paths are either an “enjoyable descent though sunny alpine scenery” or “hell on Earth” depending on the state of your knees! 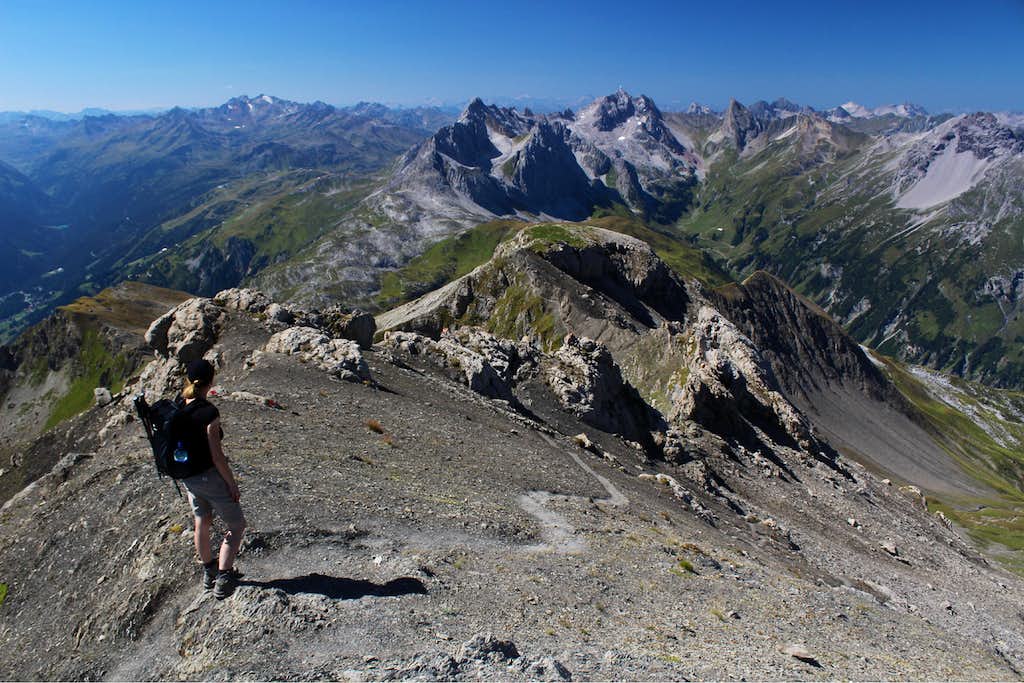 Descending from the Stanskogel. Most of the route back to Kapall can be seen in this picture. 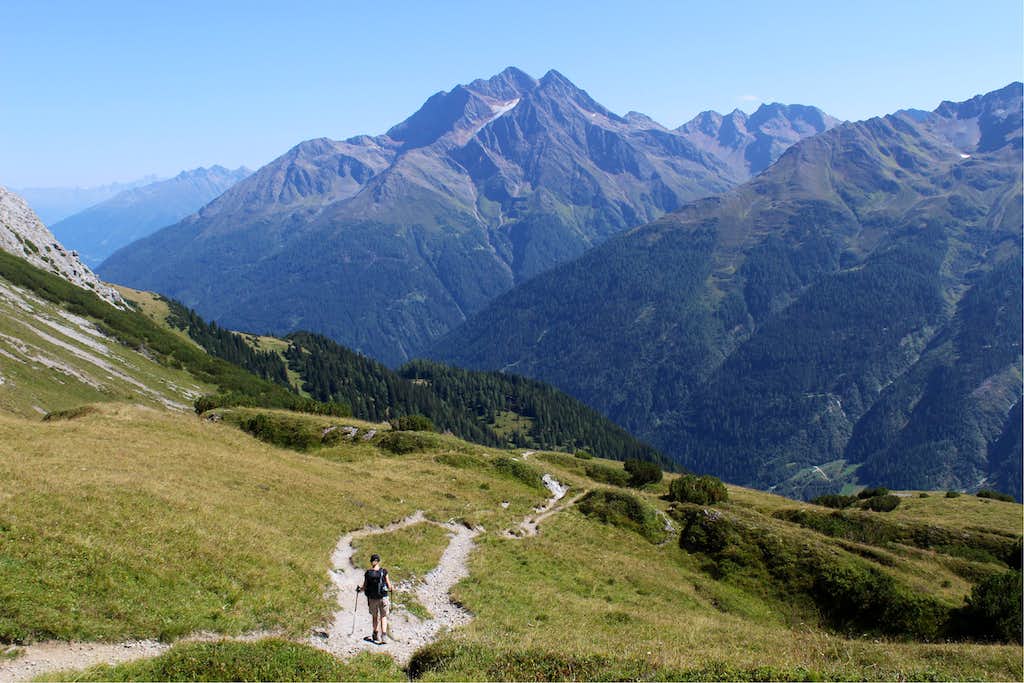 Descending from the Leutkircher hutte on path no. 642. The Hoher Riffler is seen across the valley.

It should be pointed out that it’s possible to take the cable car up to the Vallugagrat and start the west route from there. This will be a much longer day but can be split by a stay in the Leutkircher hutte or if the intention is to continue further, by a stay in the Kaiserjochhaus.

Also, the Stanskogel can be approached from Kaisers further to the north and via the Almajurtal to the Leutkircher hutte or via the Kaisertal to the Kaiserjochhaus. These are both much longer routes and could be recorded separately.

Spring (once the snow has gone), Summer, Autumn.

St Anton has plenty of Hotels and Pensions
There is a well equipped campsite at Pettneu - see the St Anton link below for details.

Hiking guide available from the St Anton Tourist Association is useful as it shows various routes in this area.