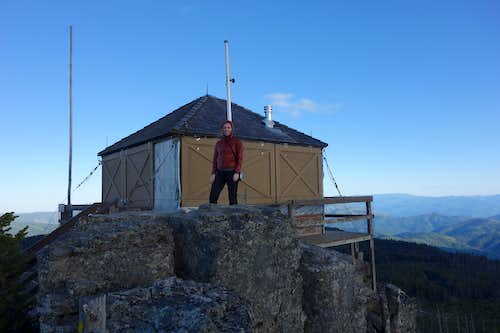 One of many "Sugarloafs" in Washington, this is the only one with a lookout present. It is also the only fire lookout in the Entiat Ranger District to be staffed throughout the entirety of the fire season.

The peak itself has a long history. First used as a heliograph lookout in 1914 with merely a camp, it was not until 1924 that a cabin was added. This was replaced in 1949 with the lookout structure seen today. The lookout was not constructed from scratch; rather the existing structure was moved from Lion Rock, where it had been built in 1932. 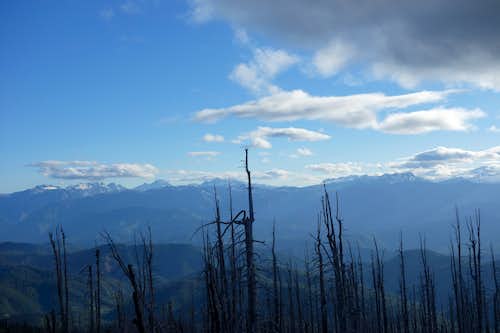 In 1994, the lookout was threatened by the Tyee fire. The cab survived, but the outhouse did not. The remnants of the fire on the ridge still make a striking contrast to the lush green hillscape that sweeps the majority of the views. Sugarloaf Peak Lookout was added to the National Historic Lookout Register on July 1, 1995. 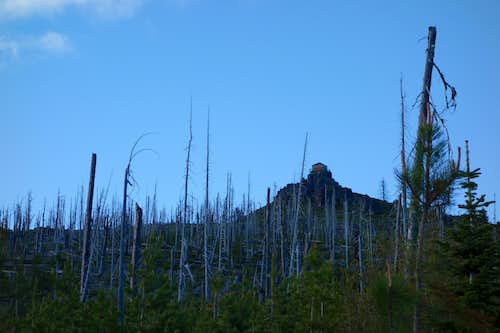 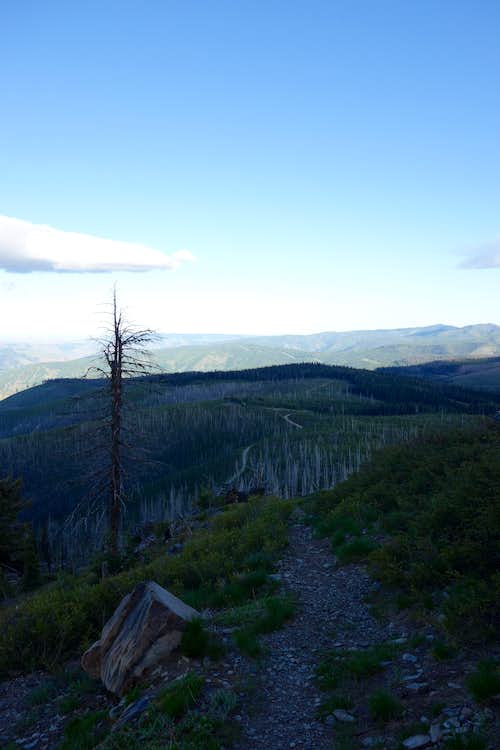 Looking back down the trail from the lookout to the road, which can be seen winding its way across the ridgetop
From Leavenworth, travel up Chumstick Valley to Eagle Creek Road (you'll see signs for the popular Eagle Creek Winery, a nice place to stop on the way back down). Where the pavement ends on Eagle Creek Road, turn left onto Forest Road No. 7520 which goes to French Corrals. From Ardenvoir in the Entiat Valley, turn left up the Mad River Road to Tillicum Road No. 5800 and then on to French Corrals. Drive north along Forest Road #5200 approximately five miles then turn right along a spur road. If the gate is locked park below it. From there, enjoy a short walk to the lookout.
The ride up has more deer traffic than cars, but be alert – this is also a popular route for dirt bikers.
I also believe that you can access the summit via the Nacum-Canyon Road side, but have read that after a short while (5-10 miles) the road condition degrades quickly.

This lookout is most accessible during late spring to fall, when the roads are guaranteed to be snow free. During winter, this is a very popular snowmobile route, often from the Fish Lake Sno-Park.

Additional history on the lookout, as found in regional newspapers, can be found on this personal site: http://washingtonlookouts.weebly.com/chelan-county.html