Dodger Point is a mid-elevation peak (5760') located in the north-central Olympic Mountains of Washington. The mountain is considered non-technical, with a summit that can be reached via trails. The peak is perhaps most notable for having one of Washington's remaining fire lookouts. With only a few sporadic trees on its summit, the mountain has excellent views of nearby peaks and ranges, including Mount Olympus, the Bailey Range, and the peaks along Hurricane Ridge. 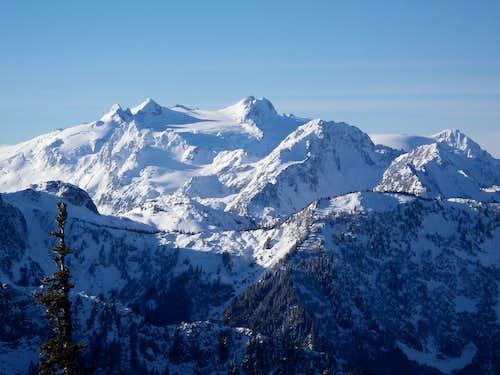 A wooden L-4 fire lookout cabin was built on the summit during 1933, five years prior to the designation of Olympic National Park. The lookout cabin was constructed by the U.S. Forest Service for the Olympic National Forest. With its expansive views of surrounding peaks and valleys, Dodger Point was an ideal location from which to monitor wildfires. Due to its vast views of the region, the building was also temporarily used as an Aircraft Warning Service facility during World War II. The original cabin has never been replaced and is still used for emergency purposes. 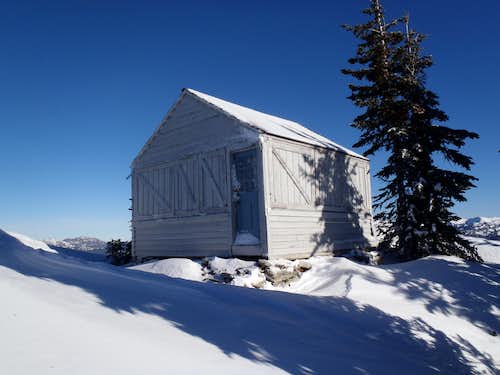 The fire lookout is one of only four standing fire lookouts on the Olypmic Peninsula and is the most service-ready (if needed) of those structures. The other three Olympic Peninsula fire lookout structures are North Point (converted to a communications tower building), Pyramid Mountain (empty cabin leftover from being an Aircraft Warning Service station during World War II), and Ned Hill (lowland wooden tower, barely standing, completely surrounded by much taller trees). 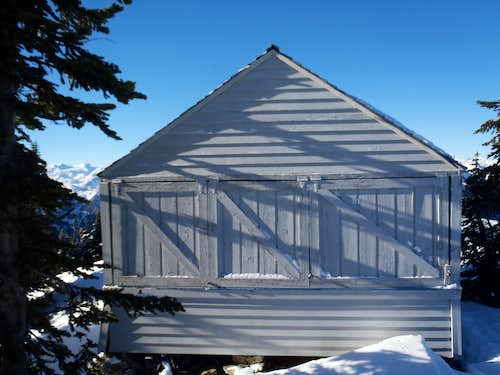 Back of cabin, Mount Olympus in background

The summit of Dodger Point can be reached via two different hiking approaches. The standard approach, which most hikers use for Dodger Point, follows Long Ridge Trail to the summit. An alternate option is to hike the Elwha River Trail, then ford Elwha River, and then hike the Dodger Point Primitive Trail to the summit. The standard approach is 28 miles roundtrip, which is an astounding amount of mileage for a single peak destination but still better than 38 miles roundtrip via the alternate approach or 33 miles roundtrip if combining the two approaches into a single loop trip. 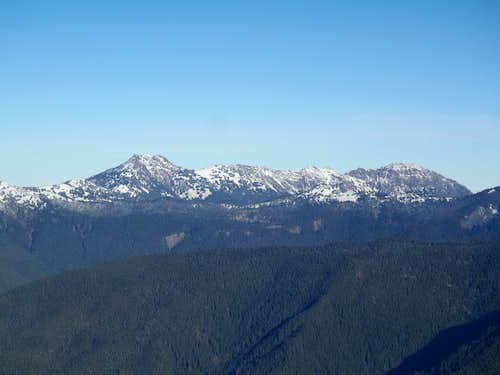 Most people hike to Dodger Point as part of an overnight trip, which is recommended. Some experienced hikers are able to hike the 28+ miles as part of a very long hiking day. Know your limits and be prepared. 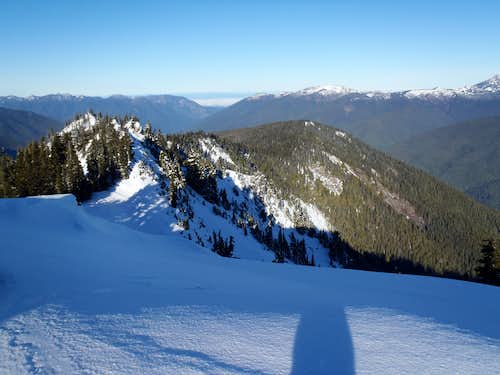 The starting location for either approach option is the Whiskey Bend Trailhead.

4) After approximately 4.3 miles along Whiskey Bend Road, the road ends at a circular parking area and trailhead. Two trails (Elwha River Trail, Wolf Creek Trail) originate at the road-end; only use the Elwha River Trail, which is the more major trail and has a couple of large kiosks.

2) After approximately 1.9 miles along the Elwha River Trail, turn right onto Long Ridge Trail. This is a signed junction, one of several along the early portions of the route which shows "Dodger Point" as the signed reference rather than "Long Ridge Trail."

3) After approximately 1.1 miles along Long Ridge Trail, the trail reaches Elwha River Bridge (875' elevation). This is a suspension bridge which is also known as the Dodger Point Bridge. After the bridge, the trail will begin to steadily ascend towards Dodger Point.

4) After approximately 11.1 miles from the bridge (14.1 miles from Whiskey Bend Trailhead), the Dodger Point summit (5760' elevation) is reached. 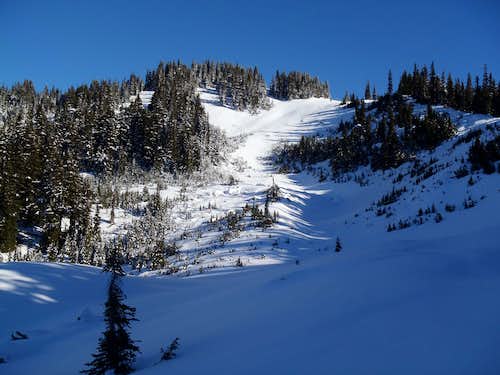 Dodger Point, as seen from Long Ridge Trail below summit 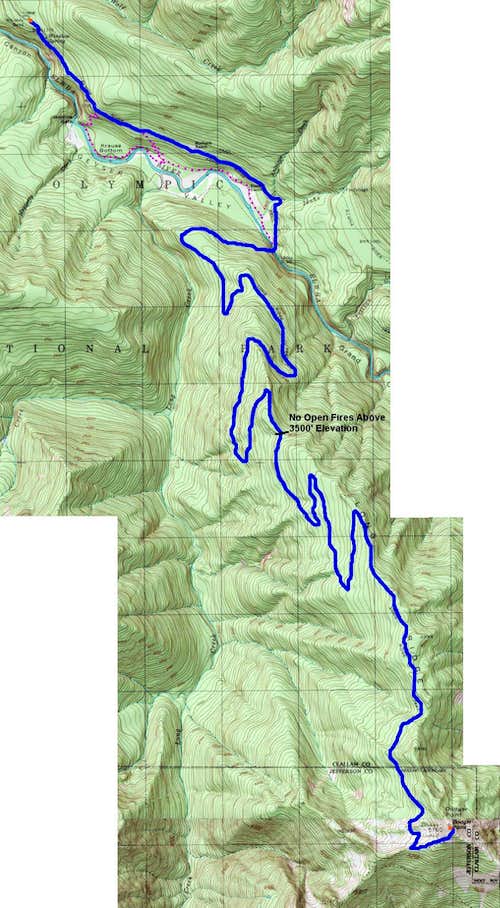 FEES/PASSES/PERMITS:
An Olympic National Park Pass is required. A single-use park pass currently costs $15.00 for seven consecutive days, or $30.00 for an annual park pass. The single-use park pass can be obtained during operating hours at either the Olympic National Park Headquarters in Port Angeles or the Elwha Ranger Station, or after-hours at the kiosk located in front of the Elwha Ranger Station. The annual park pass can be obtained during normal operating hours at the Olympic National Headquarters in Port Angeles.

FOOD STORAGE:
-> Dodger Point is considered sub-alpine high country within Olympic National Park. According to the park website and rangers, atop Dodger Point are short and/or close-proximity trees and as a result food cannot be properly hung the required minimum of 12' high and 10' away from the nearest tree. As such, bear canisters are required for overnight stays.

STOCK:
-> Horses are allowed to visit Dodger Point. In fact, the Long Ridge Trail was originally created for equestrian use.
-> Horses are not permitted to camp overnight above 3500' elevation.
-> There are currently a lot of downed trees across Long Ridge Trail, many of which might impede passage by horses.
-> Contact the Olympic National Park Headquarters for current trail conditions and/or stock regulations.
------------


DOWNED TREES:
As of Winter 2013-14, there were approximately 55 downed trees across Long Ridge Trail. Nearly half of those are condensed within a few miles before the "Elev. 3500" sign, and the other half are spread out across the remaining miles until near Dodger Point. Each downed tree location is passable to hikers without difficulty.

In theory, with a trail leading to the summit, Dodger Point can be visited year-round. However, snowpack on the mountain and approaches normally is substantial during Winter & Spring seasons, lingering into Summer. The most recommended timeframe to visit Dodger Point is between mid-Summer through mid-Autumn. 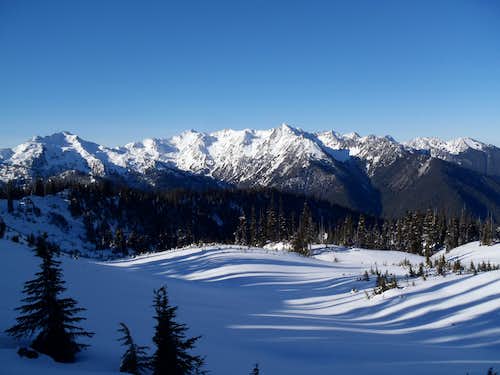 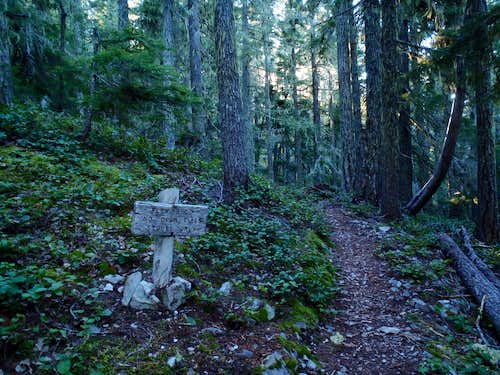 No open fires (campfires) above 3500' elevation 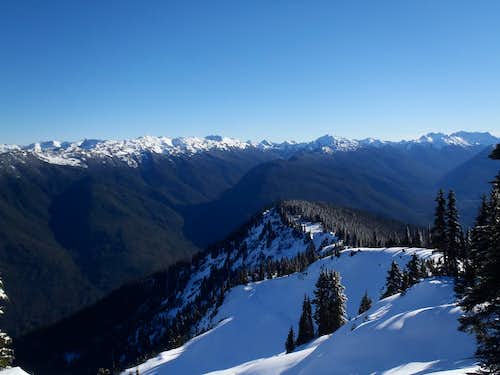