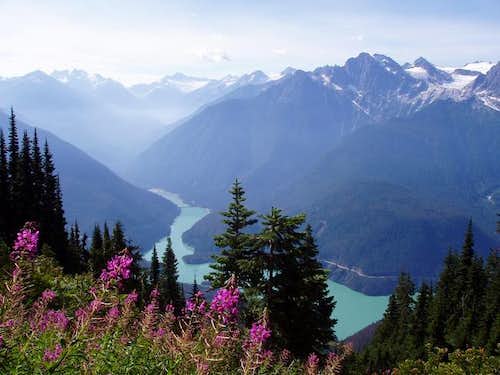 Summit Views
A historic landmark, near the summit of Sourdough Mountain, one of the first fire lookout points was established by the United States Forest Service in 1915. Glee Davis built the original lookout in 1917. The present building dating to 1933, was rehabilitated in 1998-99. "Bush" Osborne chose the location to test his fire locating device. The Osborne Firefinder soon became standard equipment in lookouts. 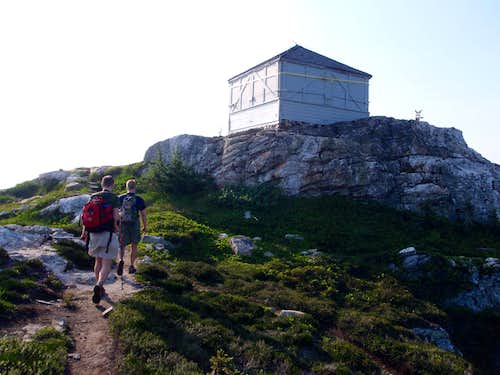 The Lookout
The true summit of the mountain is not often visited because it lacks prominence and can be difficult to distinguish from other high points along Stetattle Ridge. The lookout is located downhill from the high point, 1 mile to the southeast. From where the standard route trail crests the top of the ridge, either head downhill for a quarter mile to the lookout (48.742784, -121.109516), or uphill for 3/4 miles to search for the high point (48.749747, -121.126012). In late summer there are a number of tarns to swim in along the top of the ridge. 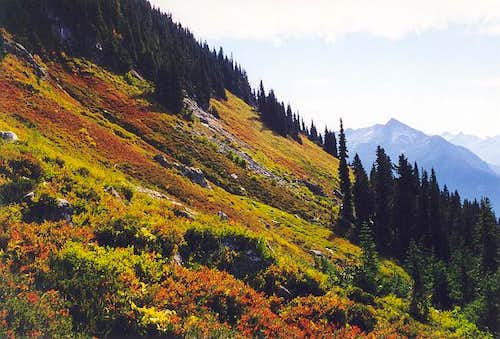 Fall Colors
Because the standard route (the Sourdough Mountain Trail) gains 5100 feet in 5.2 miles, the mountain tends to be unpopular with the athletically-challenged. However, it is extremely popular with the athletically-gifted, as the trail represents a steep and strenuous workout. The other route (the Pierce Mountain Approach) is 8.3 miles yet less steep. Because it begins across Ross Lake, it logistically tends to be more difficult. 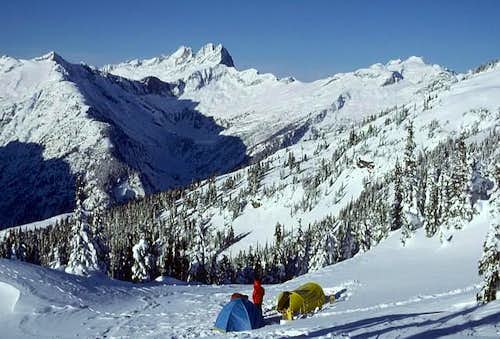 The following track mark shows both trail routes and can be downloaded for GPS use with the link at the top of the page.  Notice that this track log does not go to the true summit, but both the location of the lookout and summit are represented with waypoints. 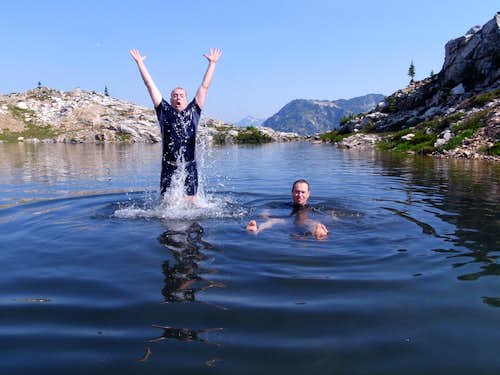 Swimming in a Tarn
The Sourdough Mountain Trail begins behind the domed swimming pool in the town of Diablo, at milepost 126 off State Route 20. The Pierce Mountain route begins 2.5 miles (4 km) from the Ross Dam Trailhead (milepost 134, State Route 20) on Big Beaver Trail. 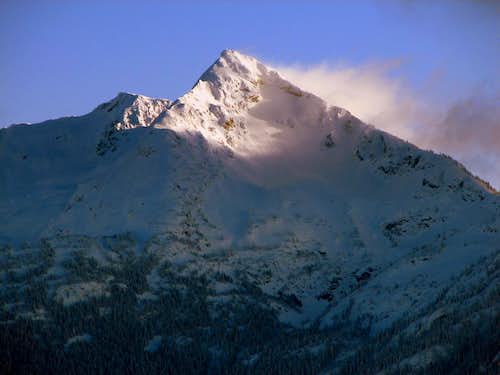 Ruby Mountain View
A permit (no charge) is required for all overnight stays in the backcountry. Pets are prohibited in the North Cascades National Park. 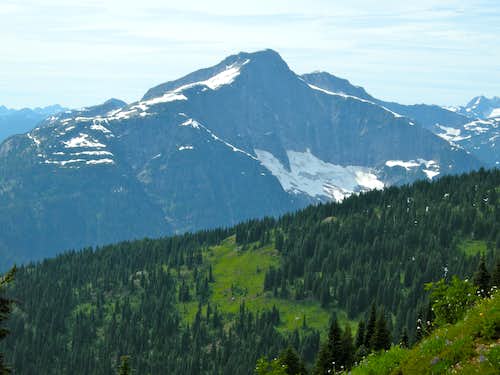 Davis Peak View
The Sourdough Mountain Trail tends to be climbed in the summer, as the switchbacks are easier to surmount. Climbing out of season is not recommended due to the minor yet still reasonable (and evident towards the summit) avalanche hazard. 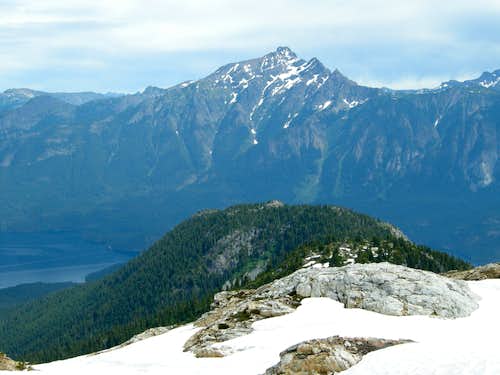 Jack Mountain View
Camping is available in two designated camps along Sourdough Ridge. Sourdough Camp is 4.2 miles (6.8 km) from Diablo trailhead and Pierce Mountain Camp is 0.5 mile (0.8 km) NE of the lookout. Bring a stove. Fires are not permitted in the fragile subalpine areas of the National Park.

For the distance hiker, Sourdough makes an excellent loop daytrip. Start from the town of Diablo, hike to the lookout, then down the Pierce Mountain trail to Ross lake. Follow the lakeshore trail SW to Ross Dam. Cross the dam, walk the service road down to the powerhouse, then cross a sturdy foot suspension bridge to the woods on the N side. Hike steeply up, then level off on a good horse trail that takes you all the way to Diablo Lake Resort. A mile of service road takes you to just past Diablo Dam, where there's a trail beside/below the incline railway into the town of Diablo again. Walk to the tourist bathrooms, use the payphone to call for an ambulance to take you the last 500 feet to your car. Total distance 19 miles, from my map measurements.

Notes: There's no water from when you leave the ridgecrest just E of the lookout, until just before Ross Dam. The other two miles of lakeshore trail are 400 feet above the lake. By the time I reached water I was too dehydrated to care about hygiene. I just drank out of Ross Lake. (No ill effects.)


You must cross Ross Dam. I tried a trail that looked like a shortcut at the NW end of the dam, but it dead-ended.


Don't cross Diablo Dam. Stay on the road past the end of it to the trail down to town.


Travel light. Pick a sunny day in late Summer so you can go with just a fanny pack and running shoes. But don't call me if the weather turns sour.

6107' is simply a triangulated point along a ridge. The summit of Sourdough Mountain is shown correctly at https://www.peakbagger.com/peak.aspx?pid=96709 and https://listsofjohn.com/peak/50323 with an elevation between 6120' and 6160'. Point 6107' is lower with little prominence.