Outbreak of WWI on the Dolomites

While the WWI broke out in 1914, the fighting on the alpine chain and on the Dolomites began about a year later, on 1915, May 24th, just a century ago, after the Italian war's declaration against the Austro-Ungarian Empire. Between 1914, July and 1918, November, the First World War involved the greatest world powers and some of the minor ones. It was initially an European war between Austro-Hungarian Empire, Germany and Ottoman Empire coalition opposed to other European countries, as United Kingdom, France, Russia and Italy, but with the subsequent involvement of the United States of America and Japan it became a full-scale war, taking the name of "World War" or "Great War". The Italian-Austrian border ran for 370 kilometers along the line drawn in 1866, an almost entirely mountainous border. The mountains were a natural bulwark in which, next to the two warring parties, a common enemy soon made its appearance: the winter at high altitude. Fighting involved different alpine and subalpine groups, as Adamello, Ortles-Cevedale, Carnian Alps and Little Dolomites, but unexpectedly the Dolomite front was the place where the war in altitude reached the limite of sacrifice. "A war within the war", where it was first of all necessary to survive the extreme environmental conditions, then to fight. Unexpectedly, why? The Austro-Hungarian Empire had in fact concentrated its defenses especially around Trento, leaving almost unguarded the Eastern Dolomites area, convinced that it would not come under attack from that direction. Contrary to all expectation, one hundred years ago the Dolomites become the scene of fighting now really appearing beyond the limit of human possibilities. A scenario that combined the harsh temperatures of winter at high altitude with the difficulty inherent the verticality of the ground, the classic one of the Dolomites' great mountains: ridges suspended over vertiginous walls, rough ice couloirs, high rock walls, overhangs. The armies involved were the IV Italian Army or Cadore Army, the Kombined Division Pustertal and the Deutsche Bayerischen Alpenkorp. 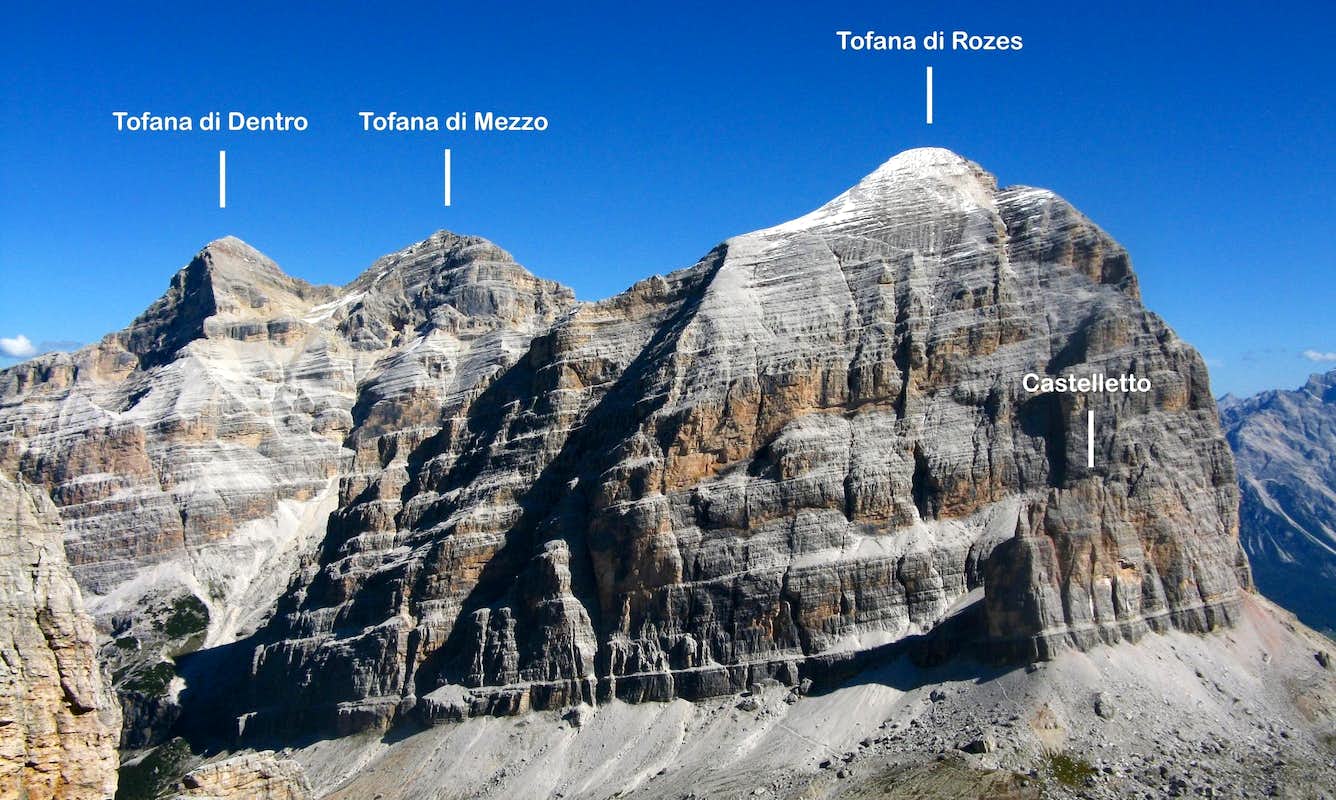 When Italy entered the war, as already mentioned, the Southern Austro-Hungarian battle array called “V Rayon Tyrol Defense“ was not very furnished, but favourite by the excellent knowledge of the territories and the mountainous terrain. The goal of Italy was to advance in the direction of Vienna along the valleys, as Val Pusteria or Villach, and quickly cross the mountain cols, as Passo di Monte Croce Comelico. But things went differently. Ever opportunity to advance quickly vanished, together with the dream of marching rapidly towards Vienna. On May 27, the Austro- Hungarians withdrew from Cortina d’Ampezzo due to strategic reasons, but continued to keep several positions on high ground fortified, to prevent the enemy to spread to the north through the main valleys, such as Val Badia, Val Travenanzes and Val di Landro. All along the front line, there was a large number of castles and forts, which could be used to block any attacks from Italians.

The hesitation of the Italian army compromised the opportunity to overwhelm the antagonist counting on the surprise factor, being the Austrian troops not yet well organized; it allowed the Tyrolean Standschützen to regroup quickly, building shelters and blasting the roads. It became a war of loneliness instead of a war of movement, indeed an exhausting war of position, made of violent assaults against impregnable positions and interminable waits.

Fighting and climbing on the highest summits

In addition to the tragic and bloody clashes in altitude, these mountains were the scene of daring ascents by special mountains parties, as the Italian “Alpini” and the Austrian “Kaiserjäger”. Soldiers became intrepid climbers before than fighters. 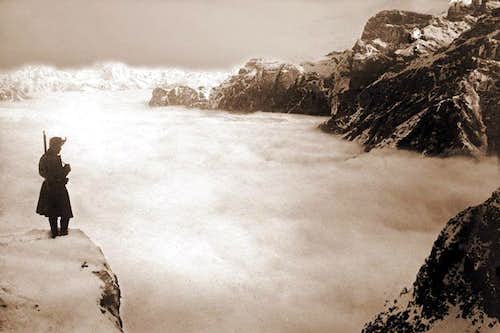 Many positions on the top of bold mountains were conquered and lost by both sides, such as the dominant summits of Lagazuoi, Cima Falzarego, Col di Lana, Croda Rossa, Forcella Serauta, Paterno, Tofane triad, these latter overcoming 3200 meters of altitude, summits that were guarded by outposts of mountain troops during the winter.

Few meters below the summit of Monte Paterno it happened one of the most tragic events: the death of the great and famous Alpine guide Sepp Innerkofler (Sesto Pusteria 1865, October 28th – Monte Paterno 1915, July 4th) from Sesto Pusteria, manager of the Dreizinnen hut, nowaday Locatelli-Innerkofler Hut, already at that time one of the most popular hiking destinations in the Dolomites. Sepp Innerkofler enlisted as a volunteer in Standschützen and fell in combat in circumstances still unclear. Another great Alpine guide involved in the conflict was Antonio Dimai (Cortina d'Ampezzo 1866–1948) from Cortina, one of the major mountaineers of late nineteenth century, first climber of the majestic Tofana di Rozes South face. He was imprisoned and later freed by the intercession of King Albert I of Belgium. The fighting amongst the mountains is remembered in reason of the many bold enterprises, but also in reason of several mine explosions inside tunnels mined into the rock. The most sensational event of the whole war occurred on a stunning rocky tower considered particularly strategic, leaning against the majestic SW wall of the Tofana di Rozes, at the cross between Val Travenanzes and Val Costeana. This peak was called Castelletto (Little Castle) by the Italians, “Schreckenstein” (literally "Rock of Terror") by the Austrians. The Austrian sentinels placed on the mountain prevented the Italian army entering Val Travenenzes; Italians tried in various ways to storm Castelletto through several attempts, whether by daring climbing from below or descending from the summit of Tofana di Rozes. Failing in order the Italians thought to blow it up, building a 507 meters long tunnel. On July 11, 1916 a terrific explosion tore off the top of Castelletto. The rocks were thrown away at thousands of meters, continuing to fall for several hours. The summit was occupied by the Italians two days later.

Also the summit of Col di Lana, on April 17, 1916, was blown up by the explosion of two mines, located below the summit in a tunnel dug. This mountain has entered history as the scene of bloody fighting. On winter 1915-1916 the avalanches did thousands of victims among the soldiers. In some areas fell by up to 12 m of snow; a huge avalanche, which struck on an Austrian camp at foot of Marmolada caused three hundred dead; almost the same number of soldiers died in an avalanche in Val di Landro. Marmolada became famous, too. After fierce fighting, the Austrian Leo Handl planned to create a system of tunnels into the ice. Citadels were created in the bowels of the glaciers, allowing to bring supplies in altitude without obstacles, with the advantage of being more protected not only from enemy fire, but also from the weather. 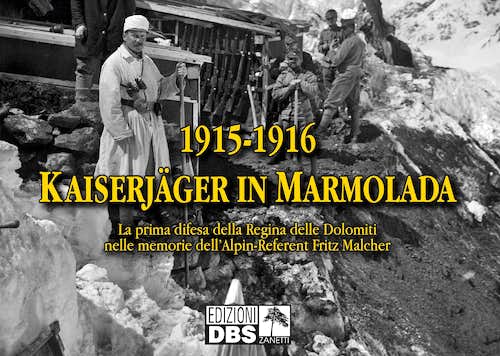 The exhausting position-war, made of continuous sudden attacks by both armies, never allowed Italians to break through the enemy front, so soldiers spent two hard winters fighting amongst the summits. The war on the Dolomites continued until 1917, November, when the italian IV Army was withdrawn from the Dolomites and retreated to Monte Grappa after the Italian defeat of Caporetto (river Piave). The war in the Dolomites ended without winners or losers and on November 5, 1917 Cortina d'Ampezzo was occupied again by the Austro-Hungarians. The defeat of Caporetto spared the fighters of the entire Dolomite region the third winter of fighting at high altitude.

Summits of WWI in the Dolomites

Several mountain groups of the Dolomites were involved in the fighting during the WWI. The main ones were Tofane, Fanis, Nuvolau-Cinque Torri, Tre Cime di Lavaredo, Cadini, Sesto Dolomites, Marmolada. A wide and wonderful region, today shared amongst Belluno, Bolzano and Trento provinces.

Major WWI sites of interest in the Dolomites

Thanks for remembering the WWI in the Dolomites. I'm interested in these places and visit them too...

This month will be celebrated the centenary of the outbreak of the Great War in the Dolomites. Recurrence apart, i think this one is an interesting topic and these places full of remains certainly deserve a visit.
Thank you very much for visiting!

...for the incoming centenary of the Great War! About bibliography I only suggest to correct two names: they are Antonella Fornari and Luciano Viazzi, two friends well known in WW1 historical research.
And compliments for your summitpost contributions and climbing activity.
Ciao
Luca

Glad for your appreciation! Moreover thank you for noticing these corrections to be done. Many wishes also to you for your climbs!
Ciao. Alberto

Will you attach this article to the Dolomites page?

Thanks, Vid! Yes, i'm going to attach it.

...but, as I have often thought when visiting the Dolomites, how incredibly sad that man can wage war in so beautiful a place. And such a destructive war also, with tens of thousands slaughtered - and I understand more killed by avalanches (many deliberately released) than by bullets and cannon-shells.
best wishes, Mark

Re: Great piece of history...

I agree, it was a real desecration of the peace of the summits ... I am convinced, however, that people today, at least in most civilized countries, are more sensitive to the environment and something like this could not happen again...I hope so, at least.
Thanks and best things, Alberto

I've been in the Dolomites myself and regret not reading this article beforehand. I know it's a dark part of history, but still, seeing the ruins of the WWI hospital high up in the mountains gives me quite a specific thrill.

WWI on the Dolomites had been the "dark side of the moon"...Anyhow, a century has passed and the wounds on the territory and in the souls are now healed. The remains still in the area are a piece of history and an interesting source of meditation for all of us

I tried to do my best to delineate in a clear and concise way and not too specialized or too boring for the reader a topic actually much complex and about which many words were written.
I thank you for having enjoyed my written!
Best wishes, Alberto

I've actually visited the open "ski-museum" this January, dedicated to the WW1 in Dolomites. So called "Grande Guerra ski tour" in Alta Badia.

It's a whole day skiing program where you visit all the fortresses and leftover artillery pieces. Pretty interesting ride.

I have few photos, and I'm willing to share.

Interesting tour, indeed! Your photos are welcome, i'm waiting for those. If you want, you can attach the images to this article!