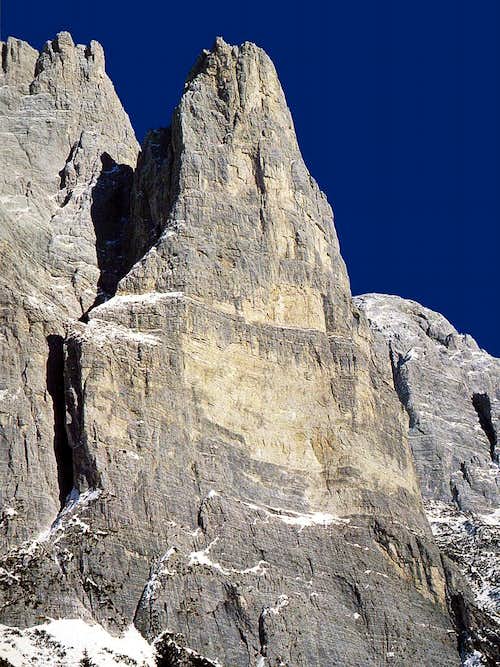 
Torre Trieste is quite a gigantic tower 700 meters drop, lying nearby the Rifugio Vazzoler in the Eastern Dolomites, Civetta Group. The Tower of Towers, so climbers call this superb summit rising up with a tremendous rush on the head of Val Corpassa, is just the kingdom of the sixth grade. Its fascinating outline is one of the best symbol of the Dolomites, and the tower is both powerful and slender at the same time.
Lying in the last Southern limit of Civetta South branch (Cantoni della Busazza) of Civetta Group, Torre Trieste is joined to Castello della Busazza by a short ridge arriving to the "Forcella Cozzi" (Napoleone Cozzi was the first climber of this summit in 1910).

Two deep gorges are the boundaries of the tower.

I think that nobody can feel at ease on this giant rocky structure (rising for 700 m over the screes), just approaching it or simply giving a look it you can understand that getting the summit will be a fight: it is, I think, one of the most difficult and challenging summit of Dolomites (not only for technical difficulties). It's just the sixth grade's kingdom.

No easy route to gain the summit: first climbers arrived there descending from Castello della Busazza to Forcella Cozzi and then climbing the last section on dangerous and difficult rock.

The descent from Torre Trieste involves a long series of rappels.

Starting from Belluno, follow the valle Agordina towards Agordo and Listolade.
In Listolade a route on the right can bring you to Capanna Trieste. where you must start walking. Parking.

From Capanna Trieste a wide path leads in about 1,45 hour to Rifugio Mario Vazzoler , from where all climbs are better reached. 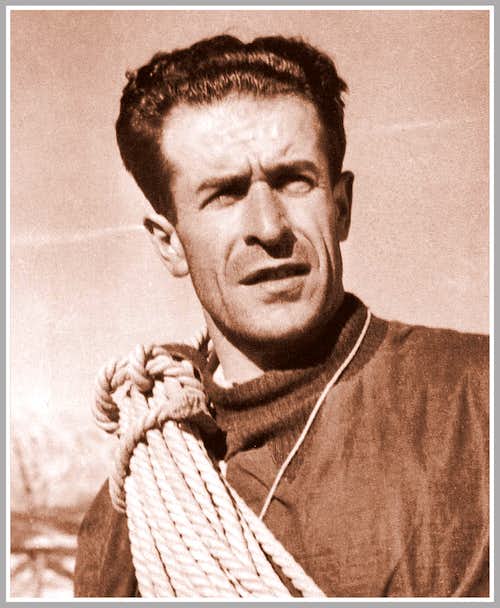 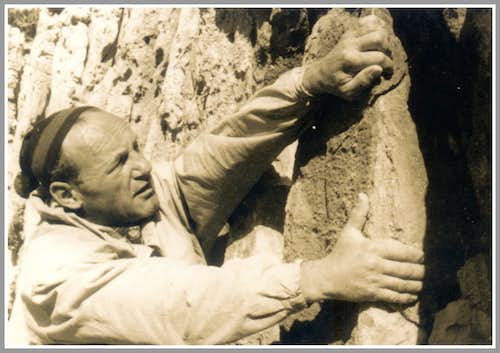 ***The first summiters of Torre Trieste were Napoleone Cozzi and Alberto Zanutti on july 16th 1910.

***Some of the best exponents of the Sixth Grade's Age, like Raffele Carlesso and Riccardo Cassin, climbed on "The Tower of Towers" in the Thirties, realizing some of the hardest routes of the Dolomites in their age.

***In the Seventies Jerzy Kukuczka with his Poland team measured himself with Torre Trieste opening a mixed route on the South face, Via dei Polacchi.

There are not easy routes getting to the summit. The Normal route climbs Busazza from Van delle Sasse; from here it needs to downclimb and rappel to Forcella Cozzi m. 2373, dividing Torre Trieste from Castello della Busazza, then climb up to the summit.


Another not extreme route along the West gorges, the route Castiglioni-Kahn, allows to reach the Forcella Cozzi. IV, V, 500 m. Rarely climbed today, because of not safe for rock quality and falling stones during storms. 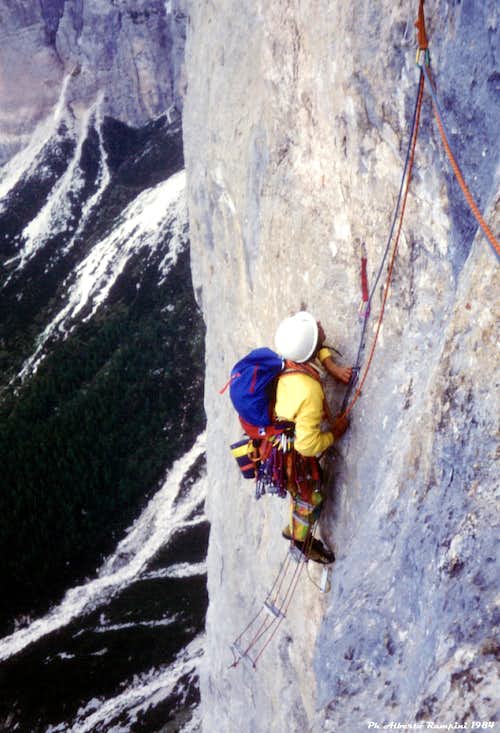 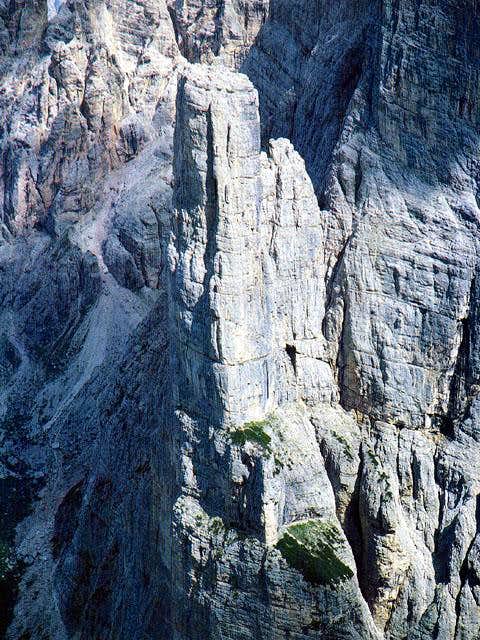 A dizzy view of Torre Trieste from Moiazza


South-East edge - Via Cassin-Ratti ED, VI, VI+, a few short moves grading A0 and A1 (or VII and VIII-), 21 pitches, 600 m. A challenging climb of great class, perhaps the "best seller" here - 600 m drop from the lower ledge
here a fine page (in italian)
here a good page in French


South Wall - Via Carlesso-Sandri ED, VI, VI+, a few short moves grading A0 and A1 (or VII and VIII- in free climb). An oustanding classic extreme route, solving the problem of the South face - 750 m drop - 1100 m develope - 37 pitches
here a fine page (in italian) about the route (with a good photo) 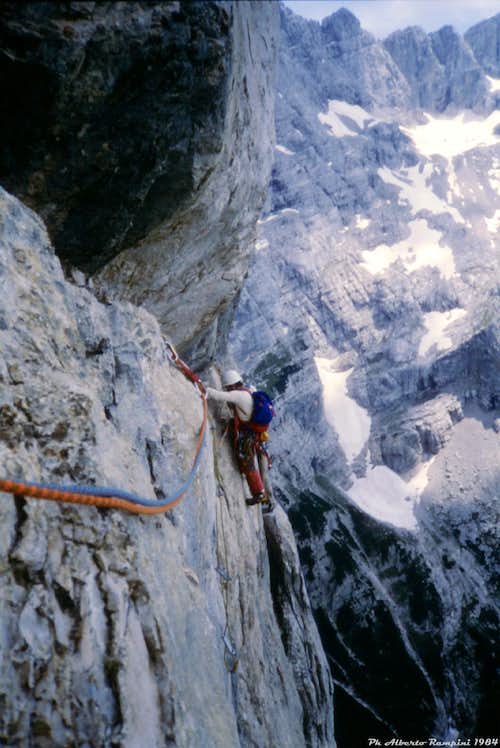 A traverse on Torre Trieste 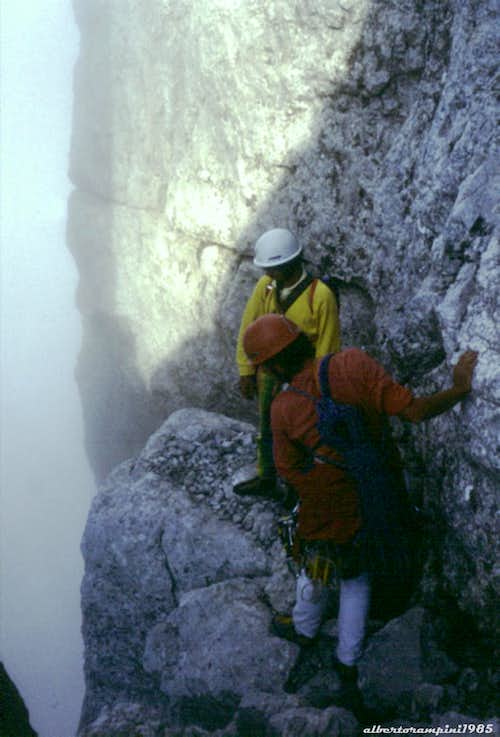 Looking for the rappel's anchors


Other shortest but very hard routes on the East face

Descent: coming down is 600 m drop, 900 m develope - requires 9-10 rappels - along the Western gorge/wall. Another descent is possible on the East face, by a series of dizzy rappels on the route Bel Tempo e Denaro. This option is advisable in early summer or late spring, when the classic descent is in snow.

No fees no permits required. The whole group is a mountain system included among the nine ones acknowledged as an UNESCO World Heritage Site in 2009. More info about Dolomiti Unesco World Heritage can be found here:

- From Capanna Trieste m. 1135 (getting there from Listolade, on the road following Val Corpassa, cars allowed until Capanna Trieste) - 1,45 hour by walk

From June to October with good conditions of rock and, of course, of weather!
Sometimes it happens that a bivouac gets necessary...

No need, Rifugio Vazzoler can host you ...
But if you don't want to spend money you can carry a small tent and put it in the meadows along the path or nearby the hut. 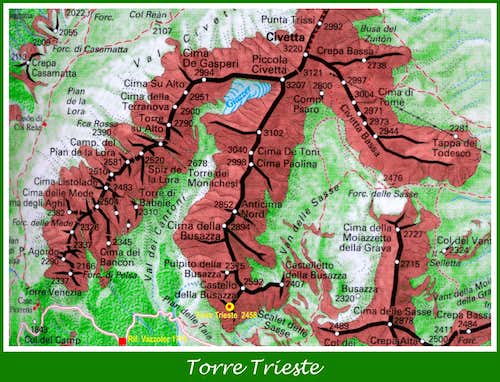