In Slovenian language č, š and ž are pronounced like ch, sh, and zh. Our mountain is written Draški vrh. 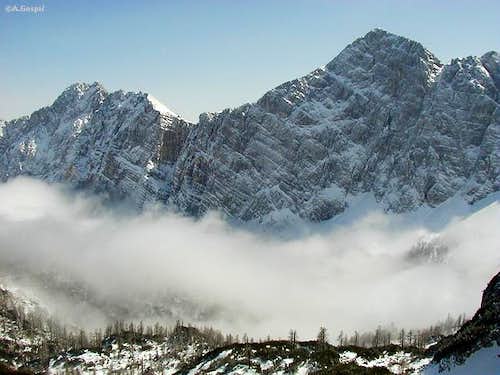 The view on Ablanca during the ascent on Veliki Draški vrh

South-east of Triglav, high above the deep Krma valley, there's a small mountain group. Like a quartet, prepared to start playing a romantic serenade of Nature, these four peaks stand around a nice oval valley, called Jezerce (=Small lake). Whether once there was a lake or not is unclear, the bottom of the valley is wet and usually there's a small water source, but now there's no trace of a lake. The highest two peaks of this group rise up from the long main mountain ridge above the Krma valley, which stretches from Debela peč (on the NE) to Tosc on (SW). They have some 800 meters high northern walls, appropriate also for harder climbs. These two peaks are Veliki (Big) Draški vrh, 2243 m and Mali (Small) Draški vrh, 2132 m. The other, southern side of these two mountains is a bit less steep and so appropriate for hiking. Actually, Veliki Draški vrh is one of the most beautiful ski touring summits in Julian Alps, while Mali Draški vrh is steeper. From the latter only in very good conditions a ski descent can be done. The other two peaks of the quartet are lower, stretching southwards from both two big brothers. Sleme (also called Ablanca), 2004 m, south of Veliki Draški vrh, is rarely ascended, while Viševnik, 2050 m, south of Mali Draški vrh is one of the most popular mountains in Julian Alps. This is because of Rudno polje resort, where a good road ends, and where people find a variety of sports and fun (cross-country skiing, hiking, mountain biking, etc.). On Rudno polje each year a biathlon world cup race is held.

If somebody likes skiing and is not familliar with tour skiing, take him to Veliki Draški vrh. He/She simply must fall in love with tour skiing! If not, don't take him/her anywhere else. The ski tour and summer hike will be described in the Routes section.

Veliki Draški vrh (and Mali to the same extent) are also a first class panorama summits. Triglav massif extends just in front of us. From the southern perspective we can examine just every slope, especially useful during the skiing season, that is in winter and spring.

To the west and south the Bohinj world lies. Over the South Bohinj Ridge the view flies freely over the Slovenian forehills.

To the east vast forests of Pokljuka high plateau lie. This plateau is a wonderland for cross-country skiing in winter (usually there are kilometers of well prepared tracks) and for hiking and cycling in summer. In distance the Sava valley and beyond it Karawanks range and Kamnik Alps can be seen.

3. The ridge Veliki Draški Vrh - Tosc. If you want to continue by the main ridge above Krma valley, it goes fine down on the saddle between Veliki Draški vrh and Tosc. From there to Tosc you will need to climb over a rocky ridge (UIAA II-III).

4. Skiing down by the south-west slope. From the summit of Veliki Draški vrh you can also ski down into the valley between Veliki Draški vrh and Tosc. The ski descent is steep, but in good conditions possible. Only logistically it is a misery. Unless you continue on Velo polje, you must climb back on Studorski preval (saddle) and from there return to Konjščica.

5. In north wall there are several harder climbing routes. Some of them are:

The whole Eastern Julian Alps are national parc. You can drive by the above mentioned roads at no fee.

For the summer ascent the best months are from July till October. For tour skiing usually the best conditions are from February till April. Otherwise in good conditions the mountain can be climbed any time of the year.

There are camping places in Bohinj valley and in Sava valley.