Southeast of Triglav, high above the deep Krma Valley there is a small mountain group. Mali Draski vrh is the mountain that belongs in this group. Here are located many powerful mountains and all of them have the beautiful view on other mountains in Triglav group specially on Triglav It is the neighbour of the “bigger brother” Veliki Draski vrh. Mali Draski vrh is nice mountain and it is very popular by mountaineers. It is located in the main chain above beautiful Krma valley and it is very nice perceivable. It looks like a big and high pyramid.

.
The photos of Mali Draski vrh on other pages.

From the Mali Draski vrh goes in the SE direction over the Srenjski preval, 1959m another ridge on the Visevnik. From Visevnik the ridge falls down on the big plateau Pokljuka.

The valleys are described on the Triglav page.

<---- Nice map of the area in the nearness of Mali Draski vrh.

Below the north face of Visevnik

Over the summit of Visevnik

Thanks to Vid we have described the skiing from the top of Mali Draski vrh to Srenjski preval. The description of this route you can read here.

There is also nice climbing route that is not very hard: 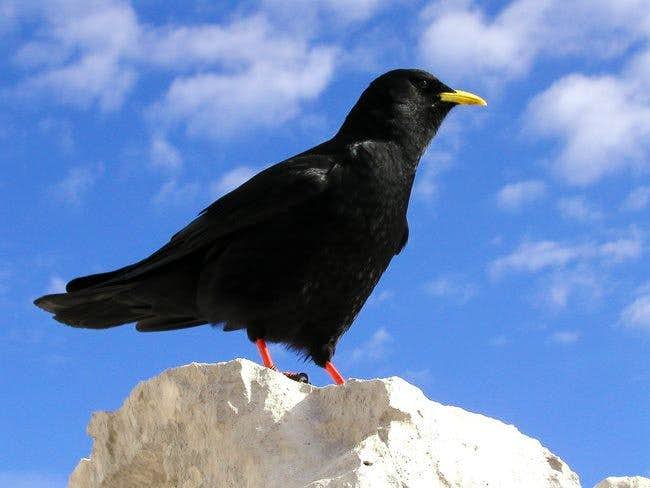 The alpine chough in Julian Alps.

No limitations but Mali Draski vrh is located in the Triglavski Narodni park so you must be kind to the nature and other beauties.

Mali Draski vrh can be climbed in every mounth.

For the normal hiking approach over the southeast slopes is the best time Juny, July, August, Septmber and October.

The best time for climbing in the north face is from July to September.

From the top of Mali Draski vrh you can also ski but the southeast slopes must be covered with snow a lot of snow!

In the nearness is only the Vodnikov dom (hut). There are some huts in the valleys and on starting points.

Kovinarska Koca v Krmi hut (870m) stands on the edge of Zasipska planina meadows in Krma valley. Hut was opened in 1948 in renewed shepherd’s house. In 1959 new hut was opened. In 1983 freshly renewed hut was reopened. It has 27 beds, water, electricity etc. From the hut is nice view on the peaks surrounding Krma valley, which are rising wildly above it. Hut is open from beginning of June till the end of September.

Oh I am happy to hear that! Because I was reading some reports of climbing on this ridge and I don`t climb it yet! Maybe tommorow! :-)

I will correct the difficulty.

Fine. Among routes, you can mention also from Studorski preval (crossing Veliki D.V.). Some people come from Vodnikov dom.

Ok I will write a route description of this.

Bor, I think that the W ridge of M. Draski vrh is less than III. I remember only one place where we had do climb really, but nothing special. And we are not climbers and were descending unroped. But it is nice, I must say.

Oh I am happy to hear that! Because I was reading some reports of climbing on this ridge and I don`t climb it yet! Maybe tommorow! :-)

I will correct the difficulty.

Fine. Among routes, you can mention also from Studorski preval (crossing Veliki D.V.). Some people come from Vodnikov dom.

Ok I will write a route description of this.