Tosc is powerful mountain in Julian Alps and is located in Triglav group in the nearness of Triglav. It is very heterogeneous mountain because it is various on the every side. On one side steep and airy north face, on the second side nice grassy slopes…

Tosc is the last mountain in the big faces above Krma valley on the north side of Krma valley. It is the highest point in this chain. Here is located many powerful mountains and all of them have the beautiful view on other mountains in Triglav group specially on Triglav.

The photos of Tosc on other pages.

On the N side falls from the top of Tosc steep and airy north face deeply dwon in beautiful Krma valley. On the NW side falls down nice steep ridge on the Bohinjska vratca, 1979m from where you can ascend on Tosc over NW ridge and slopes. This is a climbing route with difficulty around UIAA II. On the W side is located the Vodnikov dom (hut), 1817m. It leads below the nice shelves of west face of Tosc on the nice plateau below Bohinjska vratca. On the south side fall down from the summit of Tosc nice south slopes where goes the normal approach on the Tosc. These slopes can be also skiied in Winter and if you do this tour this will be very nice experience. On the E side falls from Tosc nice and very steep east face. Here is very nice and narrow ravine that is possible for ascend in Winter. Below this face is the plateau Vrtacica below the east face of Tosc and the west slopes of Veliki Draski vrh. Tosc is connected with Veliki Draski vrh with nice NE ridge where is also possible ascend on Tosc. The difficulties are around UIAA II.

Tosc is located in the middle of Triglav group and from its summit is beautiful view on all mountains in Triglav group.

The easiest approach on Tosc is normal unmarked route over the south slopes. This route is very popular so you can easily follow it because it is nice trodden.

There are many starting points for approach on Tosc. If you want to climb in the north face of Tosc you must come in Krma valley, if you want to reach the Tosc over normal approach over the south slopes you must drive on Pokljuka plateau or in Bohinj valley and the on the plateau Voje.

The valleys are described on the Triglav page. There is only one approach on Tosc where you don`t climb and you just scramble and hike.

It is called normal route and it is described here.

Here are two possibilities that are not very hard for reach the summit. There is only easy climbing about UIAA II.

In the east face is also popular the narrow ravine. See the photo of the ravine in the overview section. 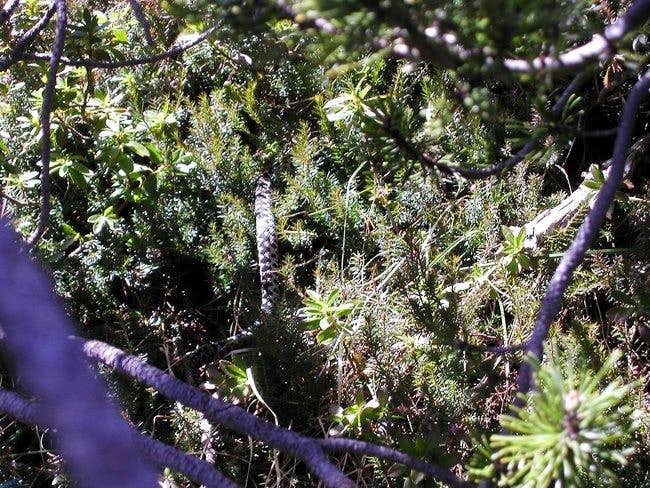 The horned viper in Julian Alps.

No limitations but Tosc is located in the Triglavski Narodni park so you must be kind to the nature and other beauties.

Tosc can be climbed in every mounth.

For the normal hiking approach over the south slopes is the best time Juny, July, August, Septmber and October.

The best time for climbing in the north face is from July to September.

The skiing season is the best from the first snow to May. But be careful about avalanches!

In the nearness is only the Vodnikov dom (hut). There are some huts in the valleys and on starting points.

Kovinarska Koca v Krmi hut (870m) stands on the edge of Zasipska planina meadows in Krma valley. Hut was opened in 1948 in renewed shepherd’s house. In 1959 new hut was opened. In 1983 freshly renewed hut was reopened. It has 27 beds, water, electricity etc. From the hut is nice view on the peaks surrounding Krma valley, which are rising wildly above it. Hut is open from beginning of June till the end of September.