Veliki Lemež is an interesting, quite stand-alone mountain in Krn group. It rises as the highest elevation in a short side-ridge, deterring from Krn - Krnčica - Vršič ridge towards the NE. On the first glance Lemež is not a high mountain. But still, towards the North its slopes are falling some 1500 m down into the valley of Lepena and on the other side some 650 m down into the valley of Krn lake. Lemež can attract mountaineers with solitude, quite a demanding hike and broad panoramas. Just SE of its summit the beautiful Krn lake lies. There's only one comfortable ascent route, but locals are for sure aware of some more scrambles, especially in its rugged northern face.

Lemez's side ridge starts on the SW on Čez Potoče pass, 1845 m. The first bump above the pass is point 1962, while the second one already has a name: Vogel, 1980 m. From Vogel a slightly rising ridge continues towards the NE first on point 1997 m and finally to the summit of Veliki Lemež, 2041 m. Beyond the summit, further toward the NE, the ridge becomes very sharp and rocky. It lowers considerably down to Škrbina (notch), 1753 m, beyond it rises again to the summit of Debeljak, 1869 m, and finally disappears it the woods above Lepena valley. Towards the North, the slopes of this ridge are falling all the way down to Lepena valley. Towards the SE the slopes of Lemež's ridge are falling steeply down into the valley of Krn lake. This valley could be also treated as the upper part of Lepena, but as the glacier, once sliding down from Krn, made a distinctive step where its morraine was, the impression of a single valley today is lost. Krn lake is lying on the altitude of a bit less than 1400 m.

When standing on Veliki Lemež we are high enough to see over the NW part of Krn group towards Kanin massif. The rest of Julian Alps is anyway standing clearly in front of us on the northern horizon. Towards the East, Bohinj mountains are stretching and towards the South, the highest part of Krn group, with the picturesque north face of Krn's nose as the highest point. So, the summit is just remote enough to offer a very interesting panorama.

Other Items of Interest

1. South-east below Veliki Lemež the beautiful Krn Lake lies. On its shores you simply must sit down and enjoy a short rest with the view on Krn summit.

2. Remains from the World War I. West of Veliki Lemež summit, on the slopes of Veliki Vogel, there were outposts of Austro-Hungarian frontline positions. While Čez Potoče pass was a no-one's land, on the other side, on the summit of Griva, there were already positions of Italian army. Griva is especially interesting for a visit. But also the ascent from Krn Lake to the summit of Vogel goes allways by the old military paths and several remains can also be seen there.

3. Šumik and Okroglica. Šumik is a tributary creek of Lepenca river, coming just down from Veliki Lemež N slopes. It hides some beautiful small waterfalls and cascades, very worth visiting. Okroglica is a similar cascade and waterfall area by the source of Lepenca river, accessible from the end parking place.

4. If you are a landslide observer - during the 1997 earthquake part of Veliki Lemež slided down towards the south. Rocks of this landslide can also be clearly seen (and visited if you wish) from the summit ascent from Krn Lake. 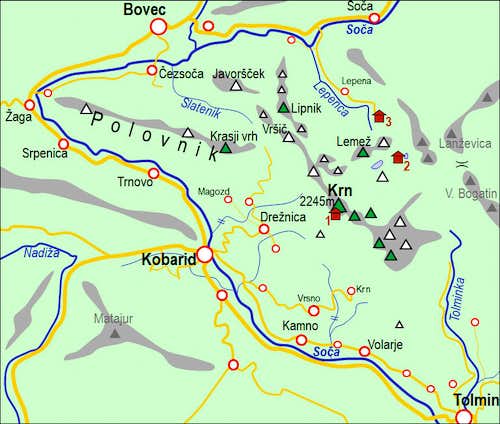 For a broader view, see the Krn Group page and the Julian Alps page.

To ascend Lemež you will probably come to the hut at Krn Lake - Koča pri Krnskih jezerih, 1385 m. This can be best reached from Lepena valley (2 h from the parking place at the end of the valley), but of course also from many other sides, trekking through Krn massif (from Komna in 2 h, from Krn summit in 2 h or from Tolminka valley in some 3:30 h). Lepena valley is a side valley of Soča valley, you enter it by a road, deterring from the main road Bovec - Soča - Vršič Pass just before Soča village. By car you can reach the end parking place on 700 m of altitude.

The second trailhead to reach Lemež in one day would be Zapleč alpine meadow, lying west of Krnčica ridge. From there you could cross the ridge over Vrata pass, 1938 m, go under the summit of Skutnik to Griva, 1999 m, and scramble down on Čez Potoče pass, 1845 m. As this was in the World War I no-one's land, from Griva down to Čez Potoče there are no military paths, so this part of the hike is more demanding. Anyway this approach is remote too. Zapleč alpine meadow can be reached from Kobarid (in Soča valley) via Drežnica village. 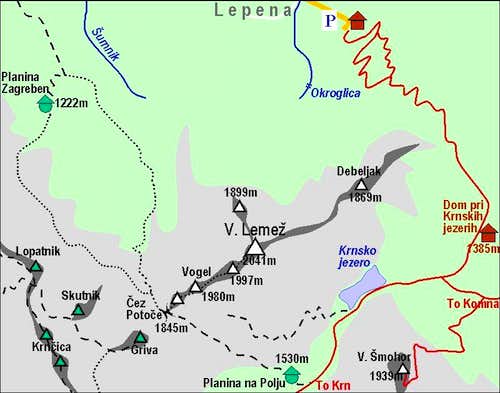 All usual routes on Lemez join on Čez Potoče pass, 1845 m, or on the nearby summit of Vogel, 1980 m. We can combine the below routes #1 and #2 (ascent routes) and #3 (descent route) into a beautiful all-day round tour!

The whole area is part of Triglav national park. Which means nothing for you. You should anyway preserve nature and leave it as it was. Except the main routes, these mountains can be quite lonesome. If you arrive with a tent and make it through the night, possibly no one will bother you. If you will hike or climb over the remote parts of the massif, you might be lucky and find relics from the World War I. Please leave them there. No need to say that they might be dangerous too. Every year many unexploded items are still found. On the other hand don't worry, hiking everywhere is safe - here are no mine fields.

If you come with your own tent, I wouldn't recommend to sleep on the shores of Krn Lake. Perhaps some ranger of the Triglav National Parc, coming from the neighbouring hut could bother you. A better option would be Planina na Polju, 1530 m (alpine meadow). You have a water source also there. If sleeping in a tent, take care to leave no traces behind you.

Lemež can be best ascended during summer and autumn. In winter and spring you will find no tracks there. You can reach Čez Potoče pass with skis. Further on, you will need in snow conditions a full winter equipment. For tour skiing the best months are from March till May, June and July for flora admiring, August to October for enjoying panorama.