On this page I would like to give an overview information of the Krn Subgroup (Julian Alps), in order not to be repeated on all distinct summit pages. The map above is also a short guideboog, on the SummitPost see also the mountain and routes pages! Regarding pictures and routes, this page is the place only for overall information.

Krn group from the east, from Bohinjska vratca (saddle). 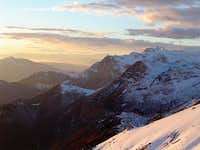 Krn group from the east

The character of this group is interesting. Its mountains are not very high, but relative altitude differences are very considerable. The southern slopes of Krn, for example, are falling steadily down towards the Soča river for more than 2000 meters. Some mountains in the group are steep and difficult to reach. Especially on the north the 'Trenta character' of mountains is already visible. In the southern part, summits are quite similar, but some are still surrounded with more modest forehills. And the undisputable king of the group is Krn itself. Very dominant, with its typical nose shape, it can be seen almost from any point in the Julian Alps and from Slovenian forehills, down to the Adriatic coast.

On the southeast, Krn group starts rising with some moderate hills, until above the broad ex glacial amphitheatre all the main summits are arranged. The eastern slopes of this subgroup, rising above the valley of Tolminka river, are even steeper. Towards the north these mountains are falling with barren karst-like slopes down to the high valley of Krn lake. The main mountains are the following:

From the Krn summit towards the northwest a long ridge runs. Its summits are steep, but vary only a little in altitude. Due to this fact and due to still preserved paths from the World War I, crossing the whole ridge is a great tour. In the middle of the ridge the Velika Vrata pass, 1938 m, allows easy passing from the western to the eastern side or vice versa. Summits:

Close to Velika Vrata from Krnčica ridge a strong side ridge goes towards the east. It soon lowers to Čez Potoče pass, 1845 m, after which it continues to the important summit of:

In the northern part of the group, above the rivers of Soča and Lepenica, the most remote mountains stand. Also visiting these summits will take you back in the times of World War I. Especially on the Lipnik, you will find the whole settlement of houses - a kind of Slovenian Macchu Picchu! From the Krnčica ridge these summits are separated by the beautiful high valley, called Dolič. Summits:

And finally the wedge. West of the Krnčica ridge there are some nice alpine meadows, actually a long, high mountain pass. West of it, the long ridge, named Polovnik, rises. Crossing it is very rewarding, but not easy. Some peaks are steep, paths are disappearing and hard to find, there you will be most certainly alone. The highest two summits are:

There are too many mountaineering goals to mention them all. Here are just some ideas:

Other Natural and Cultural Pearls of Krn Group

World War I In Krn Group

Javorca - In memoriam to WW1 soldiers

In these mountains during the WW1 some of the most fierce clashes occured. The picture below shows how the frontlines were running after stabilizing in the first year of war. Early in the war, the Italian army succeeded to take the summit of Krn, but that was more or less all which the two oponents gained, before of the great offensive breakthrough of Austro-German army in 1917, of course. But the fact of steady frontlines didn't mean that there were no casualties. On the contrary. In addition to the fact that many died in hostile activities, shocking is also the fact that even more people died as victims of avalanches. Winters in these mountains were certainly not a joy! Trenches, that were needed in the Soča valley (near Bovec), were less close in the valley of Slatenik creek. They came as close as possible on the small summit of Kal, the northwesternmost in the long Krnčica ridge. Italians were holding the summit (as the whole Krnčica ridge), but Austro-Hungarians were just a few meters below, attempting to take the strategic position (also with a mine war). So, the Austro-Hungarians were holding the crest of Javoršček, Lipnik and Lemež, while the Italians were holding the crest of Polovnik, Krnčica and the summit of Krn. On all these places fortifications can still be seen. South-east of Krn, the Italian army reached also the summit plateau of Batognica. There the two armies were entrenched in the distance of only some 15 meters. But none of them could advance. So also here a mine war developed. Attempting to dig under the opponent positions, soldiers of both armies even met underground (in tunnels) and finally in some explosions the summit blew up. You can see the crater even today. Further on, the Austro-Hungarians were holding the ridge above the Tolminka valley, so the frontline descended into the Soča valley again and crossed the river. You will see remains from the WW1 wherever you go in Krn group. Although now prohibited, people were for decades gathering grenades, equipment and other items, some of them are arranged true home museums. So now the artefacts, that could be taken with you, are rare, but can still be found. Treating explosives requires attention, of course. But there is no danger of mines, as this is the case in the territories of ex Yugoslavia after the 90's war. Hiking in Krn group is completely safe. In the Soca valley you could also take a guided tour. In Kobarid it you can visit the World War I museum. There are many internet pages on these events, unfortunately not so many in English. The most beautiful page in Slovenian language is this, and from it here are many links to English pages. But they are not mountaineering oriented.

For the broader orientation (highways, railways, airports, ...) see the Eastern Alps GROUP page, and, because this is only a subgroup page, the Julian Alps page. On these two pages you will see, how to reach the Soča valley, either from the south (from Gorizia), from the west (from Udine), the north (from Tarvisio over the Predel pass) or the north-east (over the Vršič pass). Tolmin can also be reached over one of the passes from the east, from the central Slovenia (Ljubljana). Once being in the Soča valley, you can reach by mountain roads (all are toll free) the following points:

The Krn group is part of the Triglav national park. So, please do everything to preserve nature! Here are some links to web pages where information is also in English:

Months with the most stable weather are usually from July to October. For tour skiing the best months are from March to May. For weather see here. Even better site is wunderground - here's the direct link to Kredarica station, 2515 m (below Triglav summit).