Vetter Mountain is located in the Angeles National Forest, approximately 23 miles from La Cañada via the Angeles Crest Highway (CA2). It's an easy hike with a rewarding view: on a clear day mountains from Strawberry Peak to San Antonio to San Jacinto and beyond are visible. Vetter Mountain marks a transition area where the Angeles Crest Highway ascends from the chaparral biome, dominating the lower Angeles National Forest, to the conifer forest above Charlton Flats. A tower at the summit served as a fire lookout. Unfortunately, this historic landmark was destroyed in the Station Fire in September 2009. 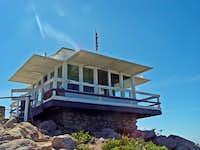 The United States Forest Service (USFS) built a fire lookout on top of Vetter Mountain consisting of a 14' by 14' wood cab in 1935. From 1955 to 1981, Ramona Merwin, her daughter Joyce and son Jerry lived in the lookout and worked as the last paid Fire Lookouts of Vetter Mountain. Fantastic stories about her life at the lookout can be read here. The Vetter Mountain Lookout was closed in 1981 and at one time there was a plan to move the entire Lookout building to Chilao Visitor Center, but a group of active citizens in cooperation with the Forest Service were able to rebuild, restore, and return the tower to operational service in 1998. Ramona Merwin and her family was invited to the opening ceremony on May 30, 1998 and made the first call, "Dispatch... Vetter Mountain in service". The Vetter Lookout tower has been open ever since during the fire season from May to November. Until its destruction in the Station Fire in 2009 the tower was operated by the Angeles National Forest Fire Lookout Association (ANFFLA) citizen volunteers in cooperation with the USDA Forest Service.

The summit of Vetter Mountain can be reached by several routes 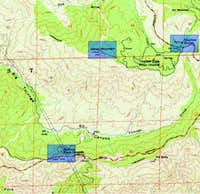 Via the Silver Moccasin Trail: This trail ascends the south side of Vetter. Beginning at 4670 feet, it descends to seasonal wash at 4200 feet. The trail then climbs through chaparral, gains the pine-covered ridge of Vetter, and reaches a junction with the road from Charlton Flat at 5600 feet. The one-way distance from Angeles Crest Highway to the junction is 4 miles. Turn left on the road and continue approximately 1 mile to the summit. Bring plenty of water in the summer, as the southern exposure and lack of shade make this a hot climb. From the Charlton Flats Picnic Area: From the Charlton Flats Picnic Area you can get to the summit either via a paved and dirt road or via the Lookout Trail. Both lead through a beautiful conifer forest. The road begins at 5393 feet and forks several times as it climbs gently through the picnic area. Taking the left fork keeps one along the ridge, offering nice views of Mt. Wilson and the higher mountains of the Angeles Crest. The road reaches a junction with the Silver Moccasin Trail approximately one-third of the way to the summit. The road then passes through a gate and turns to dirt approximately two-thirds of the way to the summit. The trail from Charlton Flats leads up along a small creek crossing the road twice before you reach the summit area. West Ridge from Upper Big Tujunga: This route is a very nice alternative to reach the summit and involves about 2 miles and 2,200 feet of elevation gain. You can gain this ridge from the Upper Big Tujunga Canyon road. Just follow the ridge (steep in places) and scramble over some nice rock slabs shortly before the summit.

A National Forest Adventure Pass or Federal Lands Recreation Pass is required to park at the trailheads.