Varful Galatau (Varful = Vf. = summit) is one of the lower, but still over 2000 m high, peak in the east part of main ridge of Muntii Rodnei. It offers great panoramatic views to the highest peak Pietrosului, to the valley of river Viseu with C.T. Borsa, Maramures mountains, and around. In fact, views are tens of kilometers away. 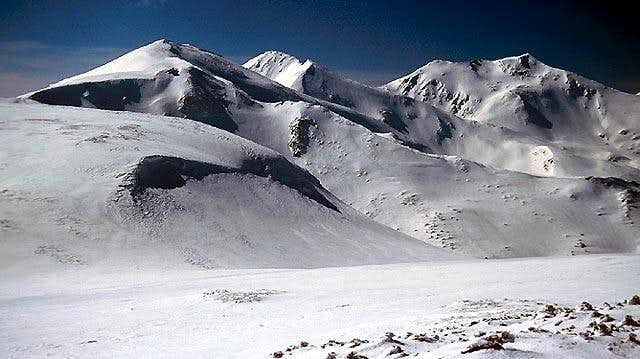 The peak is situated between passes Saua Laptelui on the west, and Saua Galatului on the east, both of them are simply accessible from the former Cabana Puzdrele (camping site is there today) that you can reach from C.T Borsa. Moreover, longer access is on the east via Saua Gargalau. Vf. Galatalui is usually reached during the crossing whole Rodnei mountains as for one day trips people prefer Vf. Gargalau or Pietrosul. North slopes are steeper and rocky, whereas south slopes are moderate.

More detailed description about getting there is at Muntii Rodnei Group

Rodnei mountains are part of Rodnei National Park and you are allowed to camp only in several passes. There are also some other reservations with higher protection.

Vf. Galatau is accessible all the year with appropriate equipment, in the summer classic tourist equipment together with waterproofs for rainy June/July period. All items of avalanche safety equipment are needed during the winter time especially if you are riding on skis or snowboard.

Do not forget that Romanian mountain rescue team SALVAMONT take care only in summer, whereas in winter you can find them only in ski resorts - here at Borsa ski slopes.

Highly recommendable are paths a) or A1), A2) via waterfall Cascada Izvoru Cailor. It is about 80 meters high. In winter we suppose the height of Cascada Cailor is about one rope, i.e. 60 m as the lowest part of waterfall was hidden by avalanche, whereas Romanian told on their Cascada Cailor ice-climbing page that it is about 100 meters high. Marked path to the waterfall was renowated by a group of French and Romanian mountain lovers in 2002.

Weather forecast is only in Romanian: Salvamont weather