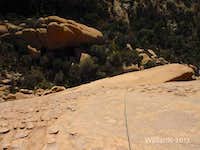 1st Pitch
One of the easiest routes at the Cochise Stronghold is What’s My Line, 5.6+R A0***, which of course makes it one of the most popular as well (listed in Fred Beckey’s “Favorite 100 Climbs in N. America”).  It runs up the beautiful (perhaps most striking face in the Stronghold) south face of Cochise Dome.  Cochise Dome sits to the northwest of the Rockfellow Group making it as easy to reach from the west as it is the east.  This climb’s popularity has as much to do with its classic approach as it does the unique “chicken head” features/slung pro en-route. It is also one of the warmest objectives from a sun perspective, however I climbed it in October (warm in Cochise) and its high position in the stronghold and exposure to any breeze and/or wind make it a surprisingly pleasant climb despite warmer days in the spring and fall.

Gear station at top of 2nd pitch
From the east, continue west in the wash past the turnout for the Rockfellow Group on your left.  The broad south face of Cochise Dome is unmistakable straight ahead. Continue on the wash trail as it bypasses Cochise Dome’s massive south face on the left (south side). As you near the west end of the dome, look for a cairned (2017) climbers trail up boulders on your right. Maybe 5 minutes from the wash you should find yourself in a gully that cuts back north. Some 4th and 5th class negotiation up this gully around trees and boulders gets you to the termination of the gully as it narrows to where you need to chimney up 20’ which lands you on a ledge with a fixed rap (up and climbers right) up on the face. It is best to build a gear belay in the flake up and left vs the fixed rap which would make for more of a hanging belay (medium to large gear) and lead the route from there, using the fixed station as a point of pro before you tension (A0) down and right to reach the obvious features where the 5.6 climbing starts.

1st Pitch- 130’- 5.6R A0/ Climb up and clip the bolted station and then drop down approximately 20’ and tension right to the obvious large features. To better protect the 2nd, as the leader you should run out the climbing by not slinging any knobs until well above so as to avoid a pendulum swing for the 2nd , therefore the R rating via the guide. The climbing on these first two pitches is more 5th class than 5.6. Just angle up right along the left side of the features (featureless slab to the left, tons of knobs to the right) to an obvious fixed anchor at a stance.

2nd Pitch- 140’- 5.5PG/ Continue climbing up the left edge of the featured side of the formation passing a fixed anchor to your left and continuing (my preference) to the right side of the sloping ledge near the top of the face. There is one large knob above the horizontal to sling for a belay and a small to medium piece fits in the horizontal (photo).

3rd/4th /5th Pitches- 200’- 5.8/ I finished the climb to the summit of this wall which is reported as a 5.8 add on. Traverse out left along the ledge. The crux move of the original route is the traverse slab move down and over a bolt (lone pro bolt on the route). If you extend this well, you can easily finish to the top without much rope drag. Continue into the right facing corner and stem up to the summit shoulder. From there, move up and right onto a boulder to finish on the short bolted wall behind it to the summit of the wall with a fixed rap. A solid 5.8 move or two.

I rapped from the 5.8 short pitch back to the summit shoulder and chose to climb the wide crack (C4#3) to the west that gave me access via scrambling some 5th class boulders to the rap line at the west end of the formation. Not easy to find if you have never been there.  From atop the wide crack I climbed with the #3 there is a fixed station.  From there, scramble down and west through several large boulders (stemming) until you land the very west lower flat shoulder. Locate the fixed rap at the south end of this flat area. Approximately six single rope raps get you back quite close to where you would have left your packs if you committed to descend this side.  As I recall, you rap twice straight down to a broad arete. Then twice more down skiers left. Then a rap down skiers right to a long narrow corridor. Walk that corridor to the west end. There are two fixed rap stations. If you stem up and use the higher one, two more raps get you right down to your packs. A 70m single on the lower one gets you just down to the north of your packs where you will have to do a bit of down climbing/scrambling to reach them.

I used a C4#3 to reach the descent I preferred. Also a finger size to supplement the large slung feature belay atop of pitch 2. Otherwise, I used no other gear outside of slings on features and clipping a few bolts. Even then, I did not sling more than 3 features for any single pitch. This face is pure south facing for the most part but catches decent wind so can be cooler than it might look from the Rockfellow Group. In mid-October, it was perfect despite being warm at camp.