Woke up at 7:15 AM on Memorial Day, 2013, had breakfast at the hotel then headed for Taos Ski Valley. I Arrived at the Williams Lake Trail head by 8 AM. I headed out to the Ski lefts and then at the 4th lift I took a left leading me to the Trail head. Snow is still deep on the snow trail but packed mostly, try to stay on that foot wide trail and if using Trekking poles like I was try to anchor them on that narrow trail. Otherwise they will sink 2-3 feet in the deep snow and you will lose your footings fast. Trail is well marked with blue blaze till you get to the tree line and that is when the fun of locating the trail begins. The trail is made more difficult because of all the snow and the need to pause and negotiate the snow passages. Trekking poles were proven to be effective in crossing wide patches of deep snow while on my hands and knees. Still incredible beauty along the way and surprisingly very few people on otherwise very crowded and popular trail according to my research before the trip. Above the tree line your heart takes a break from all the huffing and puffing due to clear and obvious trails and no snow mostly. I did head left for Mt Walter 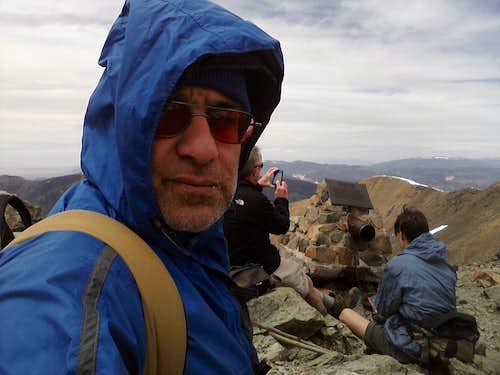 then nearby an easy climb to the Wheeler peak summit which I reached by 1:30PM. Not great on time given that I took two or three 2 minute breaks only on the way up so I can reach the summit and head down well before the risk of lightning there by noon. Strong gusty wind on the summit I think over 50 mph and I had a hard time maintaining my footing on the way up the final stretch. I took a short break, ate a protein bar and an apple, took a couple of pics on the summit before heading back down fast so I can get out of the danger zone fast. Views from the top are breathtaking and a 360 view all the way down to Williams Lake and other landmarks below. I skied on my backpack and lost track of the trail but I can see an obvious trail to my right going down to the lake so I had to scramble down a huge sections of screes and loose rocks and crawl on my knees and poles on the snow patches separating the screes till I reached this trail. Couple of dangerous falls in the heavy snow bent down one of my poles pretty good. I had to keep my guard up till I got to the car since the snow is still deep under the tree line. After the tree line and all the way to summit, I spotted many marmots who didn’t fear humans that bad. I’d remind you to force yourself to drink and eat at the high elevation even if nauseous. All in all it was a super hike, more tirey than it should have been because of the deep snow still all the way up to the Summit and that late in May.