Climbing the 50 Peaks, Part I: Leaving My Wife to Die Alone

**Originally published in "The Wellington Enterprise," October 2012. I wrote it but they own it...


“I’m never doing Everest, this sucks so bad, I’m freezing, can’t get my sweatshirt on, and I’m about to get blown off the side of this trail.”

Those were my thoughts as I was at 13,000 feet elevation and extremely close to the summit of Wheeler Peak, the highest point in New Mexico, in the southern Rocky Mountains along the Sangre de Cristo (Blood of Christ) Range.

Doing the 50 tallest state summits, or “highpointing,” has grown into a popular backpacking trend in the United States.

Most of the 50 summits require little to no climbing or backcountry experience, and the sixth highest U.S. peak, the volcanic mountain Mauna Kea in Hawaii, that stands at 13, 796 feet and if measured from the oceanic base is taller than Mt. Everest, can be driven to the top.

So I wanted to start my first of 50 with a challenge but not a death trap. Wheeler Peak is the eighth highest and could be done in a long day.

Just to give some relativity to these heights, the world’s tallest building, the Burj Khalifa in Dubai, is 2,723 feet tall, a mile high is 5,280 feet, airline cabin altitude is kept at 8,000 feet, and at 10,000 feet, available oxygen amounts needed to maintain physical and mental well-being begin to decrease dramatically.

Air density drops as altitude increases, making it difficult to breath the higher the climber ascends.

I was able to finally get my sweatshirt on, but was still frozen to the side of the path. The last 1,000 feet, above the tree line, consisted of boulder fields and loose rocks instead of dirt. Fatigue had completely overtaken my legs, as my wife and I got a late start around 11:30 a.m., instead of dawn, and had been chasing the mountain ever since. She was no longer with me.

Breathing was so hard. I looked back down the gray, loose-rocked trail and descending didn’t seem to be an easier option. Three or four minutes passed as I stood vertically with my stomach mashed against the side of a slanted wall.

A couple of little steps had my momentum going again, and the hike was back on. Twenty minutes later, after “Lord of the Mohicans” daydreams about running across mountain faces, I summited at 3:30 p.m. 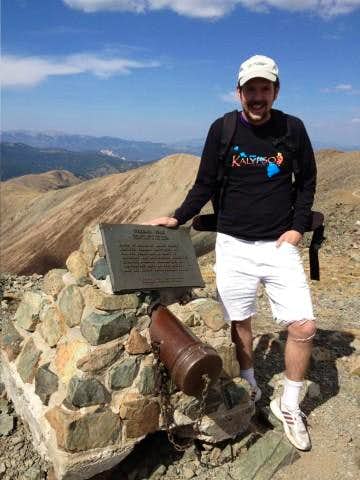 The top was a 360 degree, no fog mountainous view stretching into Colorado and the whole southern part of the state mixed with the absolute relief of knowing that I had made it. It was also nice that, even if I wanted to, it was impossible to go any further.

My stay at the top was short lived; I was concerned about my wife who I left a 1,000 feet below sleeping on the side of the mountain.

“I don’t want to stop you from living your dream, go on, go to the top,” she said before we parted.

We had both come from Ohio, whose highest point is Campbell Hill (1,549 feet), and were not acclimated at all.

Earlier, about a mile into the seven-mile round-trip summit trail, hikers that were on their way out asked us, “Are you OK? You’re doing a lot of huffing and puffing. Did you come from altitude? You need to be careful, if you summit too quickly you can get high altitude pulmonary edema (HAPE).”

My wife, who is a nurse, later explained HAPE is a life threatening fluid build up in the lungs from altitude sickness caused by a lack of oxygen at high altitudes due to the low air pressure.

Was my wife dying of HAPE on the side of Wheeler Peak? Fear led me to race back down toward her after only five or 10 minutes at the peak. I recalled Kerouac’s “The Dharma Bums,” where Jack speeds down a slope exclaiming, “You can’t fall off the side of a mountain,” and I felt renewed confidence until I remembered I yelled that phrase in northern Spain in ‘02 shortly before my companion actually fell down the side of the mountain on which we were hiking. A boulder crushed her leg and seriously jeopardized her career as a professional ballerina.

About 500 feet south of the summit, my legs began to shake and I was close to cramping. What happens if I cramp up? You see, there is no help on the side of a mountain. I didn’t even have a phone with me, just gravity, fleeting will and a trail.

Finally, after resting again and completing another endless switchback, I saw my wife walking around a little meadow bordering the area where trees could no longer grow, seemingly fine.

We were out of the woods and off the trail by 5 p.m., wind and soul and sun burnt. Most of the hikers that started at dawn were still descending the last day of Summer 2012.

Re: What we want to know

haha, she was fine (probably still all HAPE-ed up), but her parents on the other hand... not a big fan of my scumbaggery.

...for your first state highpoint. Though not a technical climb, the weather can change quickly and severely on Wheeler tuning a straightforward hike into an epic adventure. Glad it turned out well for you. Good luck with the other states.

Thanks Alpinist!
And you're totally correct. Underestimated Wheeler like the rookie I was (am?). Story sold a lot of papers, though.
Won the Mt. Whitney lotto and heading there July 14 for H.P. 10!