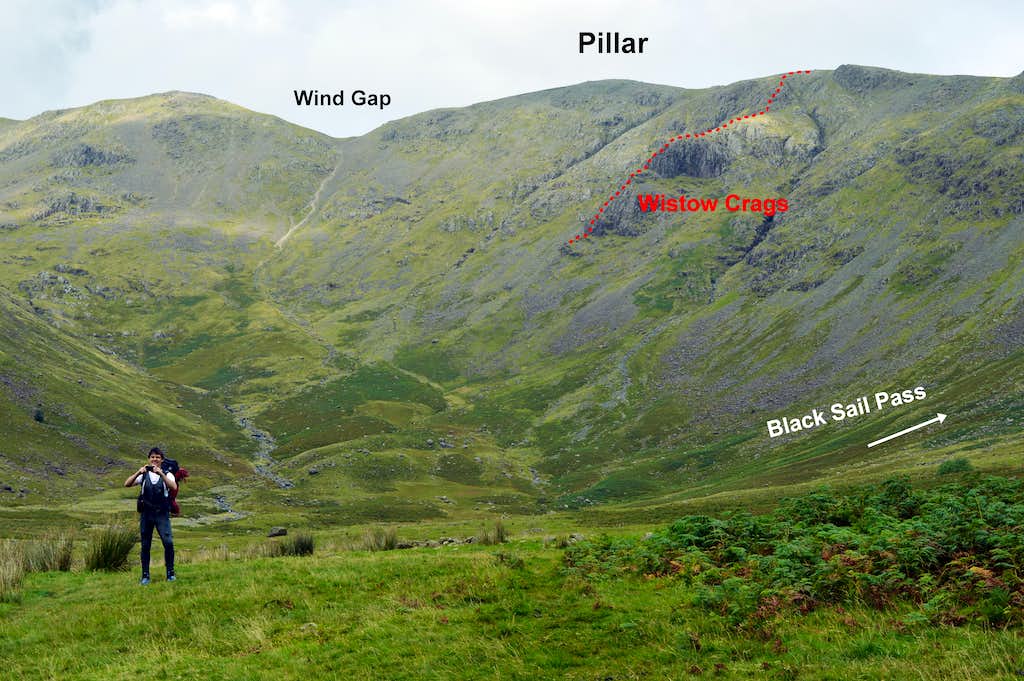 Topo of Wistow Crags, Pillar
This page was originally posted by Georgen in 2009 - with his kind permission I have adopted and updated it with some more detail and images...
Wistow Crags is one of thirty one 3 star rated i.e. high quality scrambling routes as listed in the northern and southern volumes of the Cicerone guide “Scrambles in the Lake District” by Brian Evans. At grade 3 it is at the higher end of the scrambling grade system in difficulty – and thereby bordering on classification as an ‘easy rock climb’. With a 270m (885ft) gain in height the scramble is quite long and it provides a worthy mountaineering route by which to reach the summit of Pillar 2927ft/892m – which although it doesn’t quite top the 3000ft mark surely ranks up alongside the likes of the Scafell’s, Helvellyn and Great Gable, the bigger cousins, which do. Wistow Crags takes the form of a two tier buttress rising up a spur dividing the south face of Pillar – and may be climbed as part of a somewhat sporting approach to the more famous Pillar Rock (see recently posted route page for Slab and Notch), on the opposite and northern side of the mountain (there to either do one of 100+ rock-climbs – or one of the two grade 3 scrambles there). But as a 3 star rated scramble the route is a worthy objective just in itself and leads up to within 10-15 minutes easy walk of Pillar summit.

Access to Wistow Crags is from Wasdale Head in the western English Lake District. The walk in, up the side valley of Mosedale, involves a little over 3km horizontal distance and something over 400m ascent. Much of the walk in shares the same path as the main walking approaches to Pillar and Pillar Rock and is thus well defined. However, the final approach deviates away and follows a distinctly ill-defined course over partly overgrown scree and mossy boulders to reach the start of the route at the foot of the buttress. Lack of an obvious path and little ‘polish’ on the rocks to show the way indicates that the route is little frequented – and route finding is correspondingly mildly challenging, especially low down where the climbing is also at its steepest and hardest.

In terms of seriousness, the hardest climbing is low down and can be avoided on grade 2 scrambling terrain to the left of the buttress. Thereafter the climbing and route finding become progressively easier and a competent rock-climber could solo this route fairly safely in dry conditions. Nevertheless it is a long mountaineering route ending close to the top of a biggish mountain by English standards. General hill-walking skills including navigation with map/compass/GPS can be called for in addition to those of rock-climbing. The crags are south facing so theoretically should dry quickly after rain - but we are talking English Lake District - the sun can be a rarity, even at the height of summer and some of the rocks may be slow to dry, especially where there is vegetation. 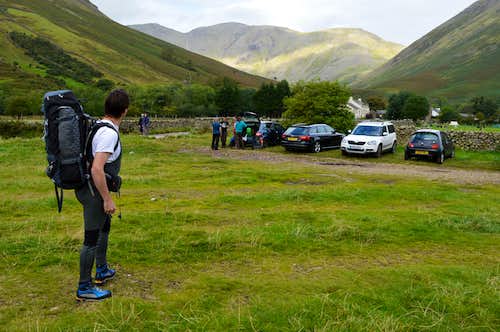 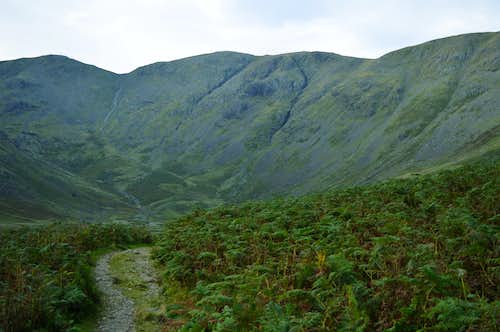 Pillar south face - path can be seen continuing to Wind Gap in distance
As above the start of the walk in is at Wasdale Head at GR 187 088, where there is a hotel (Wasdale Head Inn), a camp-site (managed by the hotel) and plentiful parking (which, unusually for the Lake District, is FREE!). A well-defined path leads to the north from the hotel up Mosedale towards the south face of Pillar. After about 1.5km (1 mile) the path divides with the most well defined branch heading off to the right up towards Black Sail Pass (and the normal approaches to Pillar and Pillar Rock). Follow the left and now less well defined branch which follows the main valley within 100-200m of the stream and ultimately makes a steep ascent of the infernal scree slopes ascending to Wind Gap. The Cicerone guide recommends following this path a little way past the base of Wistow Crags higher up to the right – and then doubling back to make an almost horizontal traverse across. However there is no path to be found and it is a matter of picking what seems to be the best line over somewhat rough terrain – and trying not to turn an ankle on the mossy scree fans which have to be crossed.

Just a little above the lowest rocks of the buttress (GR 174 115) there a few flattish grassy platforms, but the flattest and most plausible looking is the start of the route, just at the edge of the obvious gully to the left (west) of the lower buttress. 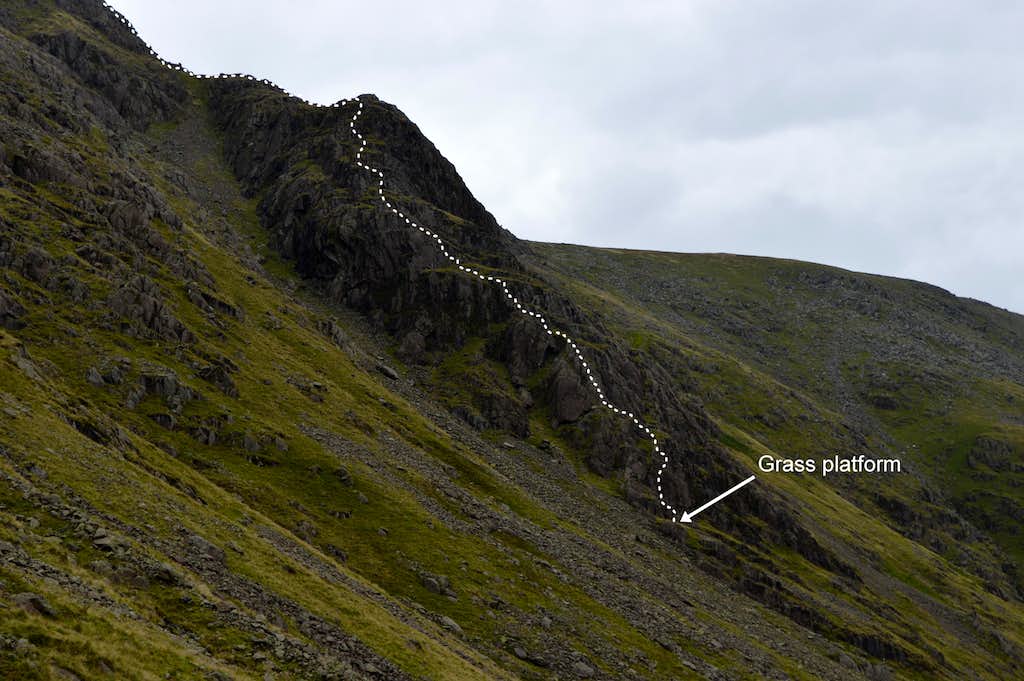 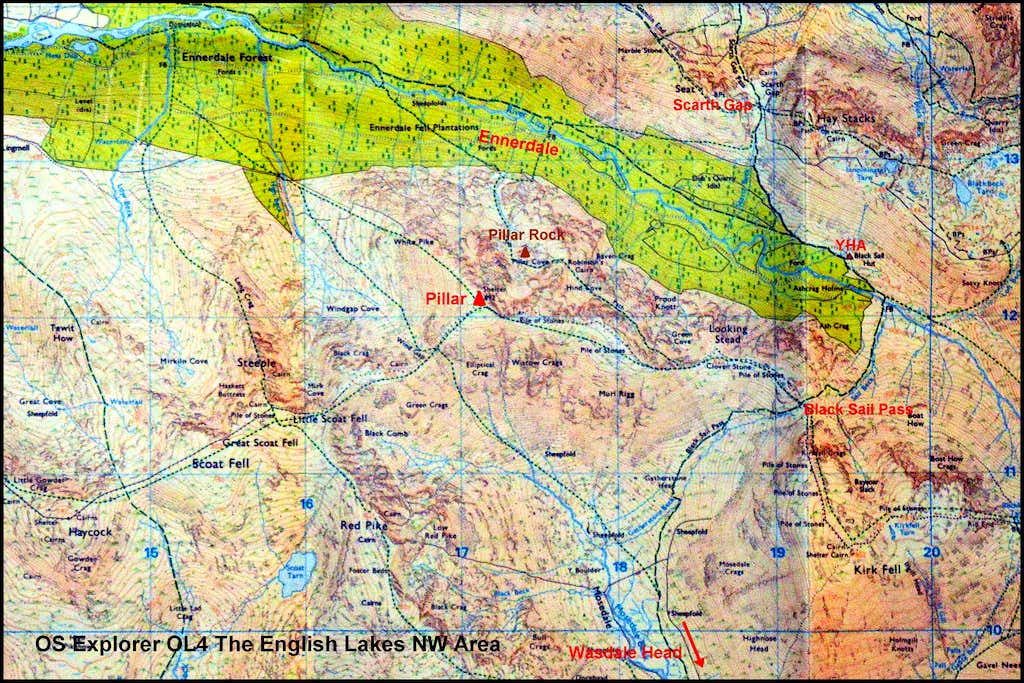 The Start: The Brian Evans Cicerone guide describes the start thus: “Start at a grass platform at the foot of the buttress. An easy initial stretch is followed by a steep wall which proves to be the crux (grade 3), but this can be avoided by a detour on the left…”

When I did the climb on 26th September 2015 my companion and I found a few grass platforms but the most level proves to be the one. As above the rocks are too ill-frequented to show much polish, but nonetheless the route can still be identified from a distance by the apparent slight paleness - where a light covering of moss is worn away (see photos above). We weren’t too sure about the exact location about this ‘wall’ since again, there seemed to be more than one possibility and there was no indication as to how long the ‘easy initial stretch’ was to reach it. In the event both proved to be very short and the wall not especially difficult – and we only worked out we had climbed it when we recognised that we had almost immediately reached “the base of a fine rib to the right of the gulley” 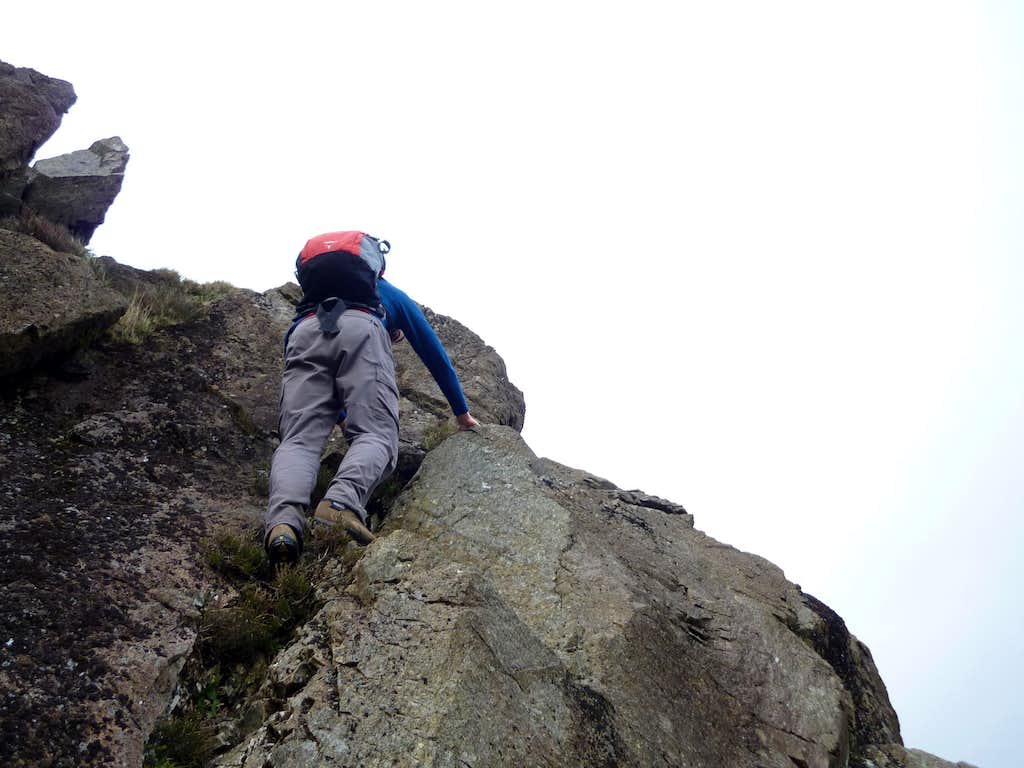 The ‘wall’ is more of a mild steepening of the otherwise relatively gentle gradient of the spur. There is a small grassy crack (see middle photo followed by Georgen's photo above) with a step to the right at the top after perhaps 3-4m – which is easily protected with a sling (as in middle photo), if a rope is used. This move is described as ‘airy’ and there is a sweep of steep rock below and to the right down to the lowest extremity of the buttress – but there is none of the electrifying exposure of Slab & Notch, on Pillar Rock on the other side of the mountain – which is at the same grade.

Lower Tier: Above the slightly steeper start the route finding becomes easier. As described in the Cicerone guide there is indeed an obvious ‘rib’ forming the crest of the spur at the right of the gulley. This this gives some pleasant and easy climbing for some distance before terrain starts to become progressively more broken as the ‘top’ of the first tier is reached.

Upper Tier: The top of the lower tier is not well defined. The angle eases and the terrain becomes more grass than rock for a distance – and then it gradually steepens again and the grass progressively more replaced by rock. Apart from the odd little step the terrain never becomes especially steep and it ‘works’ to simply keep roughly to the line of the spur as it curves slightly leftwards around the upper extremities of a now divided gulley – which has risen on left all the way up the route from the bottom. Although now getting high on the route the exposure is never great – but nonetheless the views open out and there is the sensation of having gained a lot of height since the start, with Mosedale receding far below. As the very top of the route is reached the angle gradually eases and the terrain becomes more broken again – before falling back completely as the rounded grassy crest of the east ridge of Pillar is reached close to the summit.

To Pillar Summit: At the ill defined crest of the ridge an obvious path is to be found ascending from R to L. This is now followed as it ascends the last few meters to the top of Pillar – about 350m from the top of the route. 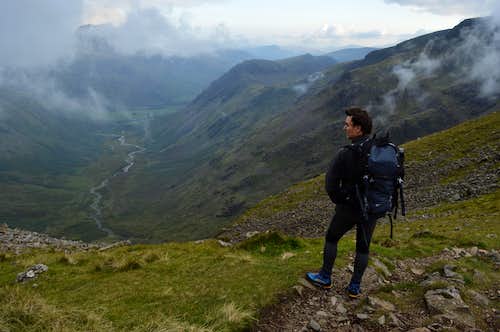 At the top of the scree at Wind Gap
At the summit of Pillar (GR 171 121) there is a cairn and a shelter, near the middle of a fairly wide summit plateau. 100m away to the north at the edge of the plateau is another cairn marking the top of the steep descent down to Pillar Rock – and below that Ennerdale. As above Wistow Crags can be used as a sporting approach to the routes on Pillar Rock - for which I have just posted a route page for Slab and Notch, another 3 star rated grade 3 scramble - and one of two easiest ways of reaching the top of Pillar Rock - but more exposed and (I think) more difficult than Wistow Crags despite being a shorter route.

To return to Wasdale there are two options:

2) Continue along the path beyond the shelter but heading approximately south west towards ‘Wind Gap’ (GR 168 118) which is reached after descending a boulder slope for about ½ km. From Wind Gap there is a very steep and mildly unpleasant scree descent of about 250m to the south – and back into the top of Mosedale. At the bottom of the scree the path is reached at the point it will have been left earlier to traverse across to the bottom of Wistow Crags – so full circle has now been completed. It is now a simple matter to follow the path – to where it joins that coming down from Black Sail Pass (at GR 183 102 and described in option 1) – and thence all the way back down to the hotel at Wasdale Head.

None bar the usual common sense following of the country code

Normal attire for a day out in the mountains in the Lake District – so to include water-proofs!

Selection of slings and chocks according to preference

Wasdale Mountain Rescue: To call out dial 999 and ask for Cumbria Police 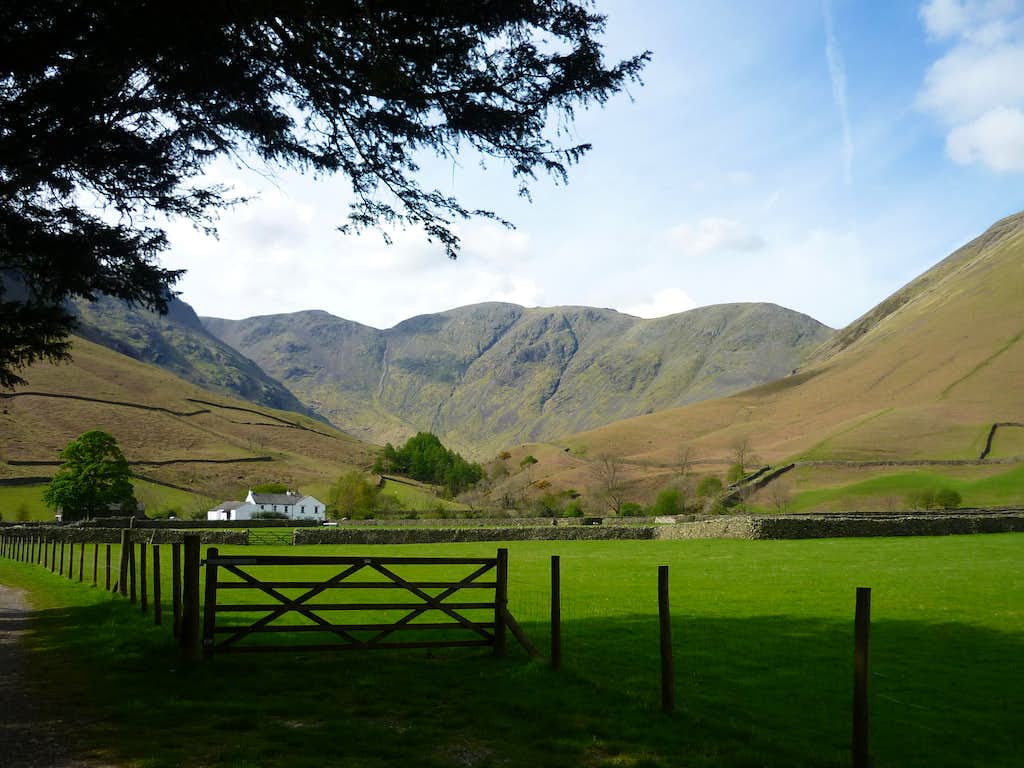 Pillar south face from near Wasdale Head - by Georgen