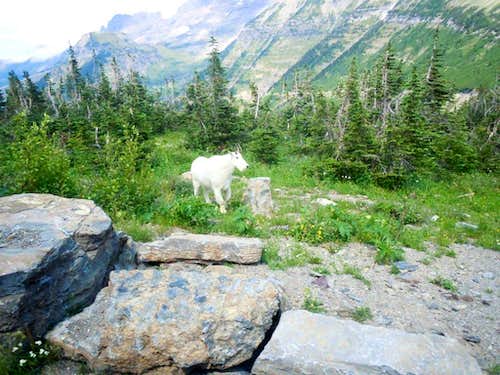 Logan Pass goat
On July 28, we drove 600 miles north to Pocatello, ID enroute to GNP for some camping, hiking and climbing adventures. We hoped to get a campsite at Sprague Creek on the shores of Lake McDonald (On prior trips we have experienced very windy conditions on the east side of the park at the Rising Sun campground) so we hit the road early the next morning (2:45 am) hoping to arrive before 11 am since the campsites are on a first-come basis.

Unfortunately, the only site remaining when we arrived around 11 am, was #1 which is reserved for handicapped campers. The sign says “available after 6 pm, see camp hosts” The camp hosts were off duty, so we headed to Avalanche Creek campground and were about to take a site there when we realized that there is no electricity at that campground. Not an ideal situation when your wife wants to use a blow dryer when she washes her hair!! 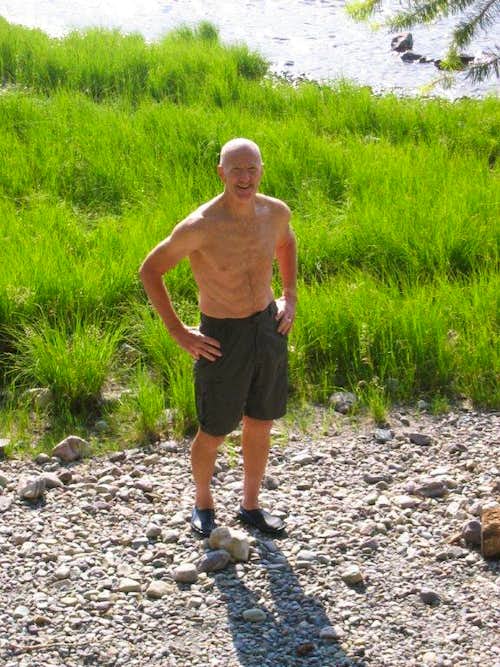 Back we drove to Sprague Creek and now armed with the info that a roving ranger can assign the camp site we squatted in the desired site and waited for a ranger to appear. About 4 pm our prayers were answered and we had it for that night. Some campers are invariably moving on in the morning, so we were ideally situated to move into a lake front site for the rest of our stay the next morning. Initially, we were thinking about spending 8 nights there, but decided to pay for 4 at the outset and then make additional payments as time passed. 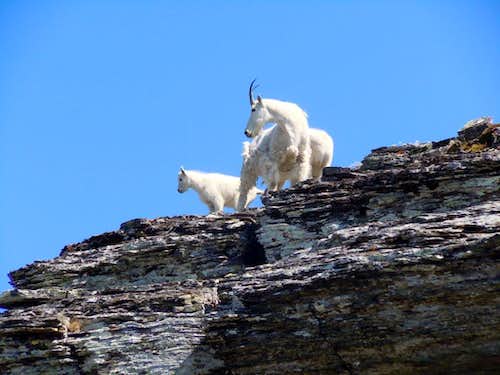 Goats on the divide


This turned out to be a good decision since the skies opened up on the 4th night and we opted to pull stakes and head to Whitefish and stay in my brother’s empty cabin on Haskill Creek with heat, water, electricity, etc. (a much better place to be when it gets cold and rainy!)

One advantage to Sprague Creek is the proximity to Lake McDonald lodge where we enjoyed ranger talks every evening starting at 8:30 pm . Another is that only tents are permitted. Also, it is one of the stops on the free shuttle system that operates along Going to the Sun Road. Did I mention it is right on Lake McDonald with nice beaches for swimming?

After moving to site #16 on the lake, we took the shuttle to Logan Pass and enjoyed a short hike up to the Hidden Lake overlook. 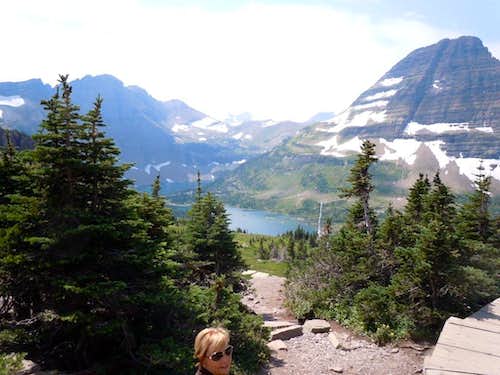 Hidden Lake hike
After driving over 1,100 miles and suffering moderate anxiety attacks over getting an acceptable campsite the first night, we were still somewhat shell shocked and there is no better elixir that a short stroll along the Continental divide in GNP to sooth the troubled spirits. We spotted goats and a couple of Rocky Mountain Bighorn sheep along with marmots and squirrels among the ever present throngs of tourists enjoying the sunshine. I suggested that my wife consider taking another easy day to rest her injured knee while I headed for a scenic climb in the morning and she agreed. 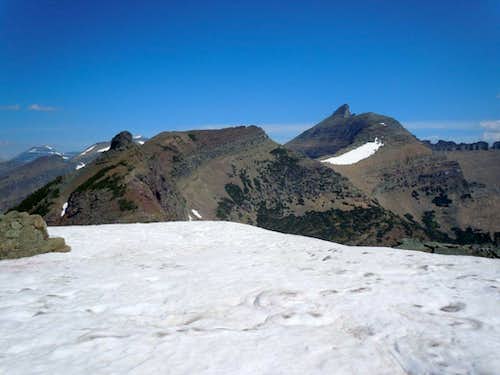 Iceberg Peak in the far distance
After an early breakfast, I caught the express shuttle to Logan Pass and rode it to the Loop where my adventure began. Heading for Iceberg Peak, one can hike up to Granite Park chalet which is a steep 4 mile trek from the Loop and then head north on the highline trail for 3 or 4 miles before climbing up to the Continental divide. However, I had done this previously and wanted to get up to the ridge top sooner, so after heading north about a mile or less, up I headed. Getting up was challenging, but once you hit the ridge top, the hike is fantastic with views both east and west as you head toward Iceberg Peak in the far distance. 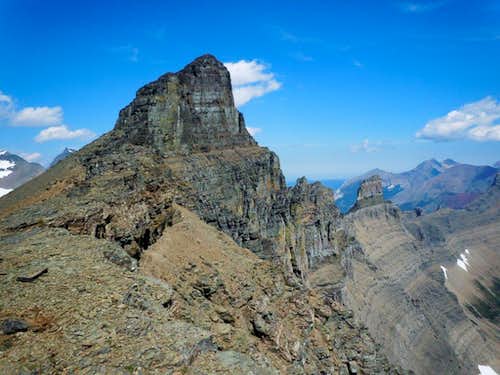 Iceberg Peak closer
There are a few class 3 moves along the way, but nothing too difficult if you use reasonable route finding skills. One caveat, however, is that the first place you can safely descend past the cliffs on your west, is close to Iceberg Peak. This is not a hike that can easily be ended a mile before you reach the summit unless you retrace your route. The highline trail looks enticing below you, but if you want to get on it, one must get far enough north to safely descend! 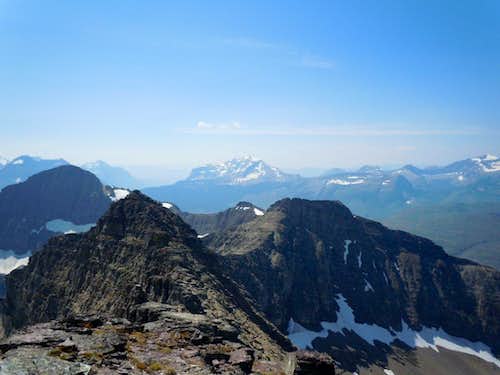 It took me about 5 hours to reach the summit and another 4 hours to return to the loop via the highline trail. I estimate the distance to be about 17 miles roundtrip and the vertical gain is close to 5,300’ considering about several hundred feet of gain along the trail on your return. 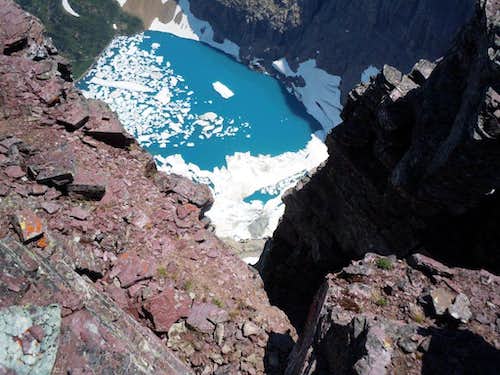 Iceberg Lake
The day provided some great wildlife sightings including about 10 goats, 6 elk and a bighorn sheep. It also claimed the skin on several toes which made for painful hiking the rest of the trip. 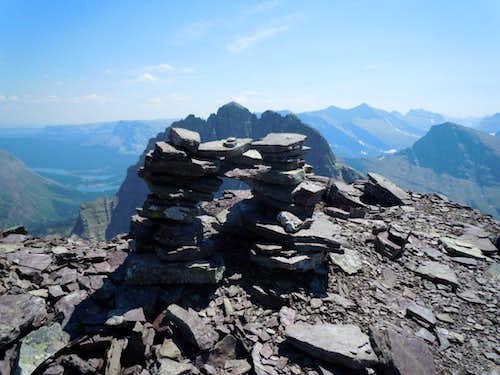 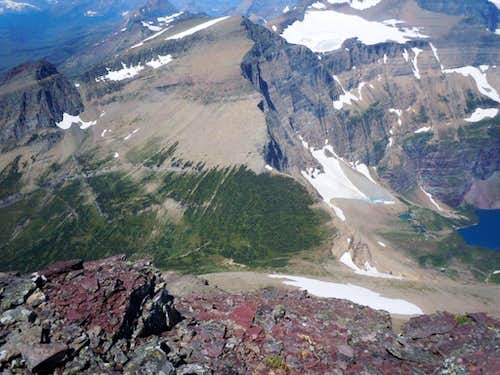 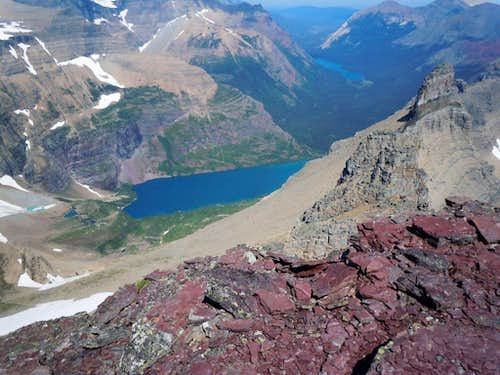 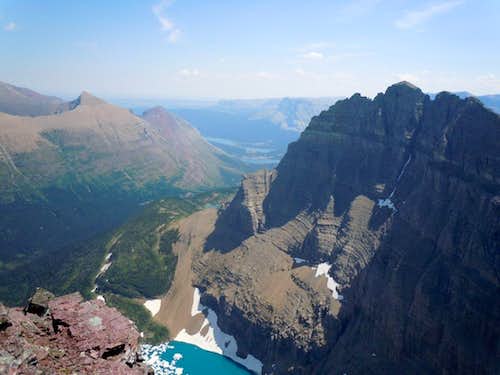 Pat took a later shuttle to Logan Pass and hiked along the Highline trail taking pictures of other hikers along the way when requested and offering some of her extensive trail advice to newbies. 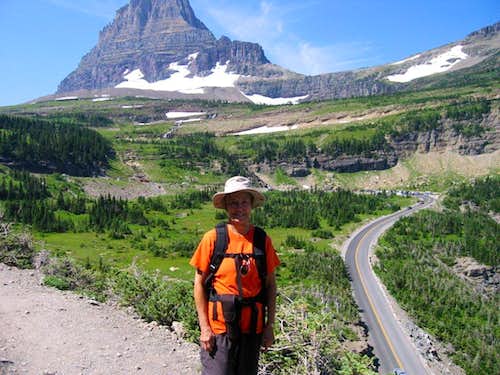 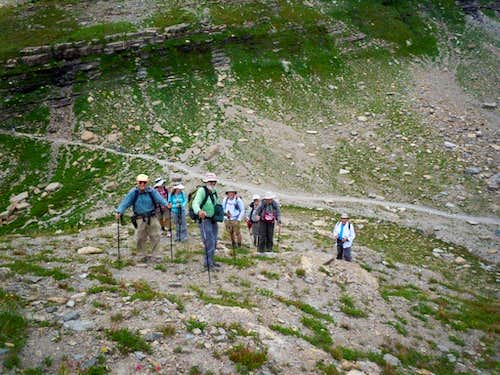 Thursday OTHG
Since this was a Thursday, we drove over to the Glacier Grill in Coram to join the Over the Hill Gang for breakfast at 7:30 am. Many of our old friends missed hiking that day, but a few including Jim G , Ivan O’ , Bob D , Fred F , Dick C and Bob Z joined me for a hike on the Highline trail to Haystack Butte which I climbed since we were there! A couple of newer members, Jim and Greta from Somers joined us also. The gang probably thought I haven’t changed much since when they seemed to be looking for a place to have lunch, I decided to head up to the summit. They were not to be found when I returned 30 minutes later. 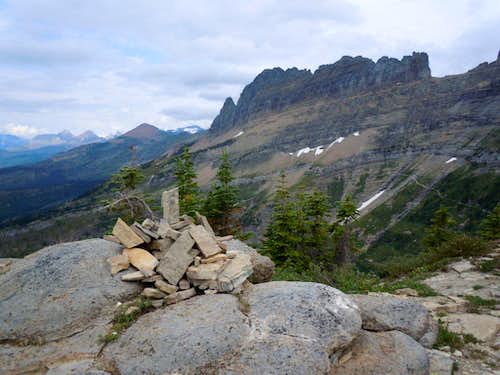 Haystack summit view north
I raced back to Logan pass expecting to catch them, but must have passed them on or near the Haystack without spotting them? After leaving a note on their vehicles, I returned to camp on the shuttle.

Pat met up with her friend Terry and they spent the day in the Flathead visiting Lee and seeing her new house and doing some shopping in Whitefish. 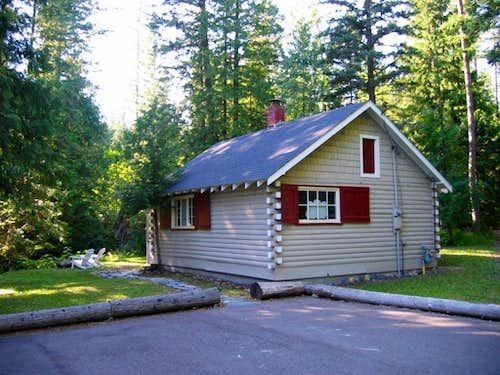 comfortable cabin
It rained all day having started late the prior night and the tent was doing a poor job of keeping us dry. There was a brief break in the showers about 7 am and I made some breakfast before it resumed. Pat had talked to my brother’s wife on Thursday and been offered use of their Whitefish cabin if the expected heavy rains drenched our campsite, so we pulled stakes and tossed all the wet gear into the car and drove to Apgar to call ahead and accept the fine offer. Then, we took the shuttles to Avalanche, Logan pass, and St Mary looking for a break in the weather so that we might do another hike. Unfortunately, the weather was not our friend this day and visibility at the pass was 0 and it was not much better on the east side. We did a lot of riding and didn’t see much this day. The good news was they really needed some rain and it cooled down the temps to the 50s from the 80s! 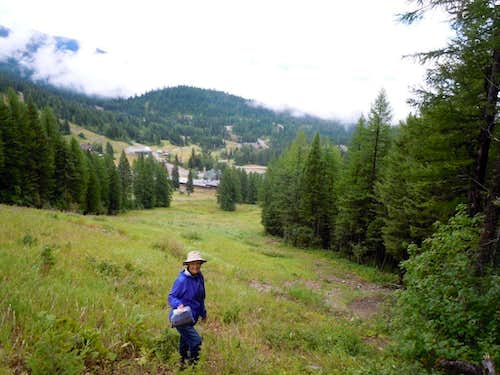 Hucks
It was another cloudy day, but the rain had stopped for the most part. After a luxurious night in the cabin with the stove taking off some of the damp chill, we had a good breakfast and headed up to the Big Mountain in Whitefish to look for wild huckleberries. Terry had advised that folks were finding them part way up chairs 2 and 3 so that’s where we headed. They were few and far between this year, but we finally located some decent picking and returned with about 1 ½ quarts which we decided to bring back to Vegas. 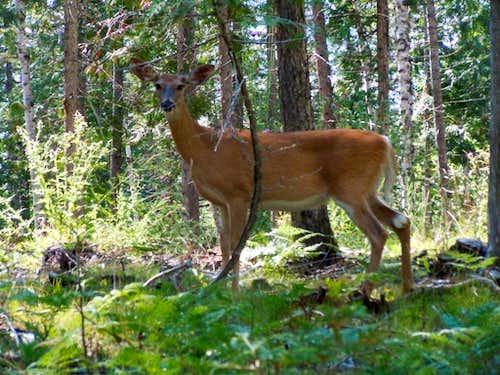 cautious whitetail
About midday, we called my old hiking pal, Vern, and went over to visit him and see how he is getting along with his new pacemaker. He is a bit disappointed that there is not a turbo boost button for when he wants to speed up a mountain, but otherwise had no complaints. He related finding the climber who fell on Grinnell Pt the previous week when the OTHG was hiking up the same climb. Apparently, the young man slipped on some cliffs and fell about 60 feet. Vern related that in the course of the fall, the climber had lost his pack, followed by one shirt and then by another shirt as he tumbled down the cliffs. There was nothing they could do when they found the body but wait and keep any bears from getting too close while waiting for the rangers to come a couple of hours later and recover the body. 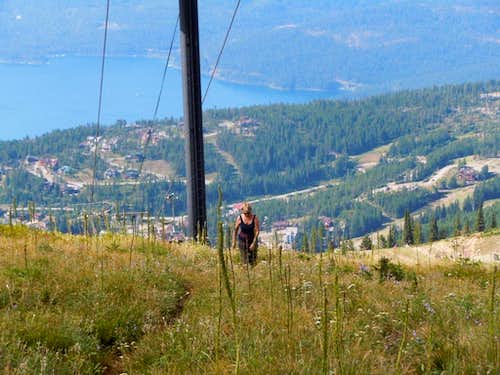 Big Mountain
The weather continued to improve so we decided to hike up to the top of the Big Mountain. We started up the Danny On trail for a short distance and then Pat suggested a direct climb up Toni Matt ski run which she did once before with Terry. 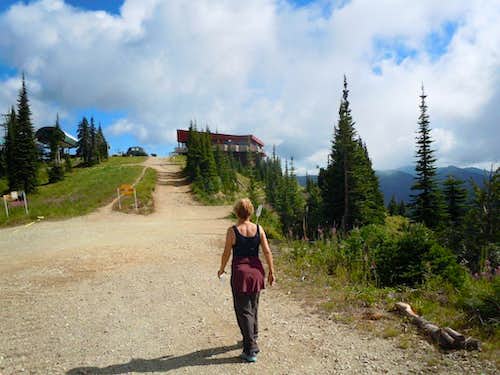 Big Mountain summit
Talk about regrets, this was much steeper than she remembered and we were glad to finally reach the summit and return via the more user friendly Danny On trail. It looked like rains might be returning, so we made a quick return without stopping to eat many of the hucks. 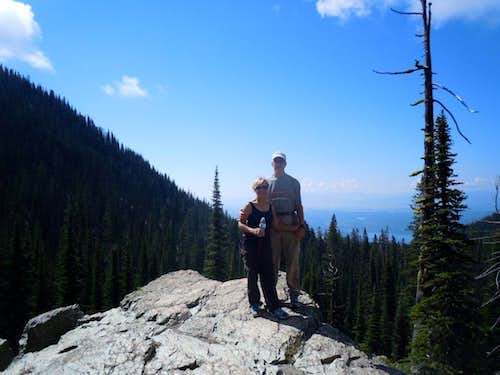 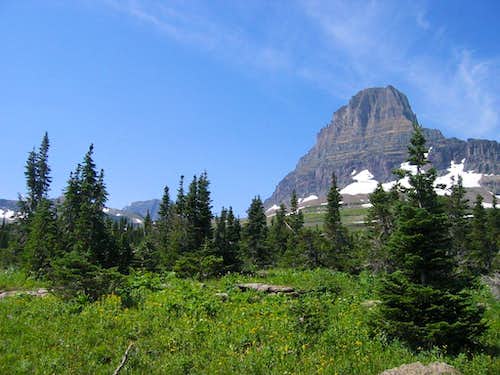 Mt Clements
This was our last day in Glacier country and I still wanted to visit the park while in the area. Thus, I left Whitefish about 6:20 am and headed to the Apgar transit center to catch an express to Logan Pass. We left there about 7:30 and arrived at the pass 8:45 on a mostly sunny day. My goal was to climb Mt Cannon again and time/energy permitting head over to also do Mt Clements. 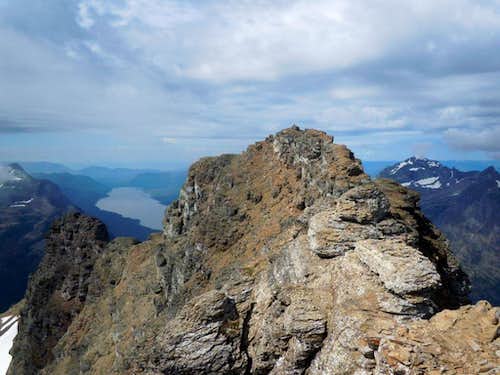 Mt Cannon
The combined climb covers about 4,000’ of elevation gain over a distance of only about 8.5 miles. It had been almost a decade since the last time I did this, but the route is easier to follow now than it had been. 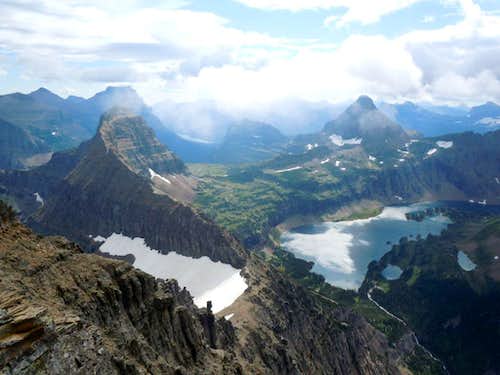 Bird Woman Pass
It was a perfect day with only a few threatening storms clouds lurking about. Since these peaks are relatively close to the pass, the effort to climb them was much less than Iceberg Peak and I was done in 6 hours and heading back on the shuttle shortly thereafter. 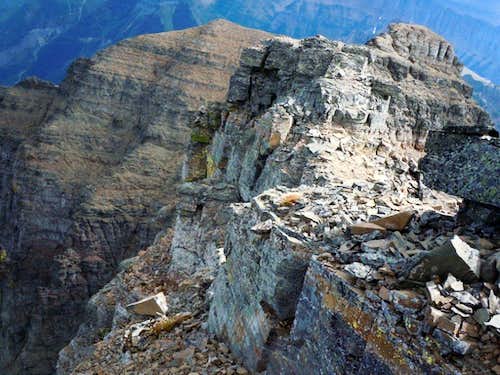 Glacier Park rock
I ran into a huge thunderstorm driving back to Columbia Falls complete with golf ball size raindrops and hail, but arrived at the Back Room right at 5 pm in time to meet my family and Terry for some great food to celebrate a successful visit. 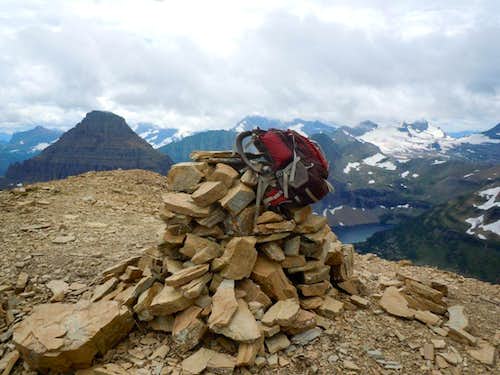 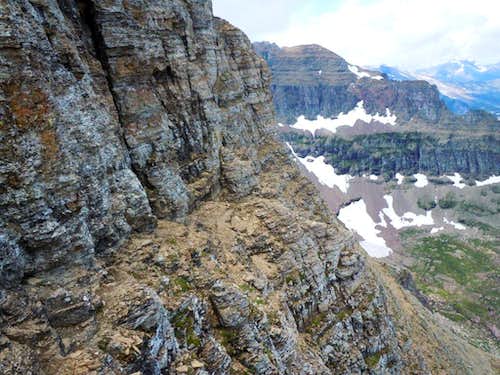 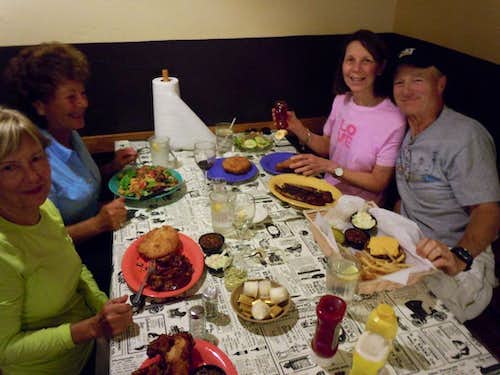 We drove about 700 miles the first day to Provo, UT where we enjoyed an Olive Garden dinner near the Provo River Inn and finished the final 400 miles the last day arriving home about lunch time without incident. It was another long hard trip to a beautiful place and we put 2,500 miles on our VW Jetta TDI averaging over 43 mpg. The diesel prices in Vegas were the lowest we saw at 3.59/gal both leaving and returning while Utah seemed to have the highest with many stations asking over 4.25/gal.

Hey Jim,thanks for the trip report, I have not been back to glacier since moving to colorado. Miss the summers there.

Dude your Ripped, Keep it up!

Thanks Peter, One thing never changes there...traffic jams of tourists in the summer and road repairs. It's an amazing place...another thing that hasn't changed. You can get a few miles from the road and have the place to yourself. Only saw 2 hikers in about 7 hours when I climbed Iceberg Pk!