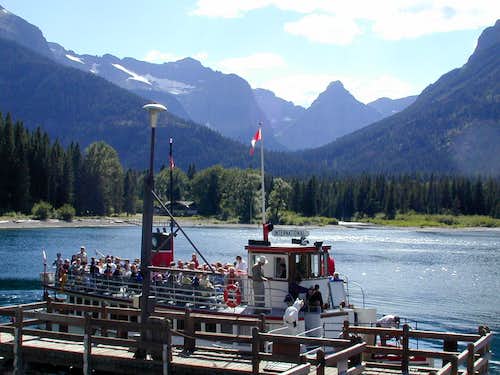 Boat from Waterton to Goat Haunt
On Sept 14, 2000, Vern Ingraham and I headed to Glacier Park for a climbing trip to the N Central region. We stopped at Apgar Ranger station at 8 am to get our permit and were on our way in 20 minutes driving to Waterton Park in Canada where we caught the 1 pm boat to Goat Haunt. We reached the trailhead about 30 minutes later and started our 9 mile hike to the campground at Brown Pass which at 6,255’ is over 2,000’ higher that Waterton Lake. 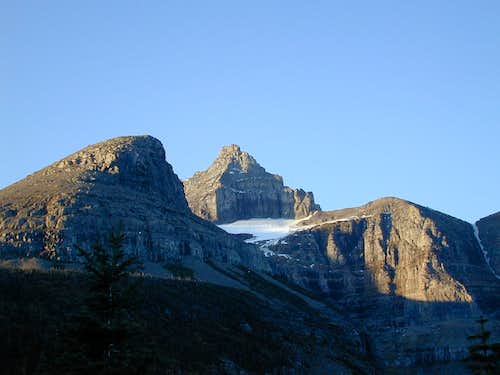 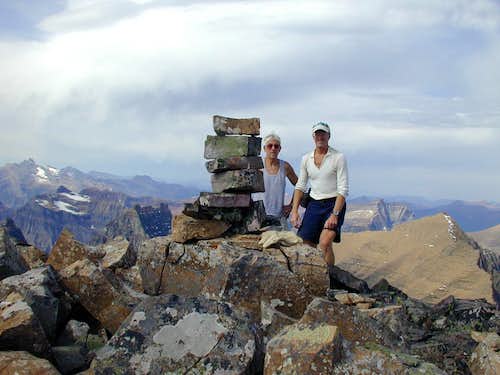 Summit of Guardhouse
This trail is not heavily used, and has disappeared in numerous portions of this 3+ mile traverse making passage difficult and potentially hazardous. We reached the prominent notch north of the Guardhouse and dropped about 500’ to traverse south on its eastern slopes heading for the saddle between the mountain and Porcupine Ridge. This traverse may be easier earlier in the season at a higher elevation crossing steep snow, but we found the snow too icy to cross without crampons and ice axes. From the saddle, we scrambled about 1,700’ up to the 9,336’ summit and were rewarded with great views in all directions. We returned to Brown Pass after ~ 11 hours, footsore from the difficult traversing, and decided to climb Boulder Peak the next day as a “recovery” day.

When we reached the camp, we learned that a grizzly had visited our tent leaving footprints across the sides and top, bending the support poles like pretzels and making several slices in the base where the bear removed a clean hand towel which may have been attractive due to use of fabric softener in the wash.

Day three, we hiked 5 miles to Boulder Pass and up the easy slopes of its N/W ridge to the summit at 8,528’ where we had an early lunch and enjoyed the views of Numa, Peabody, Kintla, Kinnerly and, especially, Custer, which we decided to visit that afternoon. The approach was not difficult using part of the old Boulder Pass trail before heading north to attain the ridges that head N/E to the peak. The summit pyramid was difficult looking, but after traversing the south side and looking around at the eastern cliffs, we retraced partway back to the west and found a route up to the summit at 8,883’ 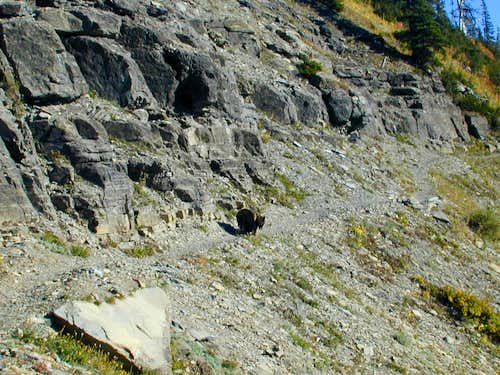 Grizzly on trail to Brown Pass
On our return to camp we ran into a good looking grizzly who huffed and descended about 10’ to the trail in front of us and casually started “leading” us back to camp. After cautiously following the bear for several hundred yards, we were glad to see him head uphill about 40 yards where he could watch us pass. We were back to camp after ~ 10 hours. 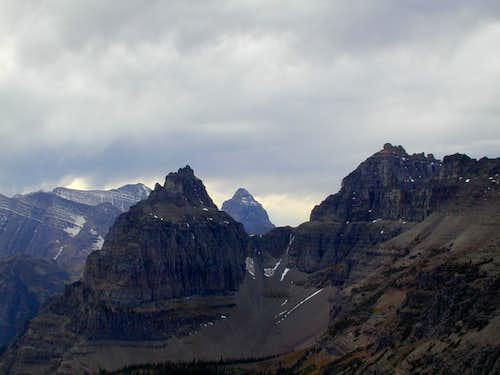 right to left: Thunderbird Mtn, Kinnerly Pk(through notch), Kintla Pk(in distance)
Day four, we headed back over Thunderbird Glacier to climb the Sentinel. After traversing about 1 ½ miles on the goat trail? around the west and south sides of Thunderbird Mountain, we angled N/E up the slopes to the ridge between Peak 9,125 and the Sentinel and on to the summit at 8,875’ 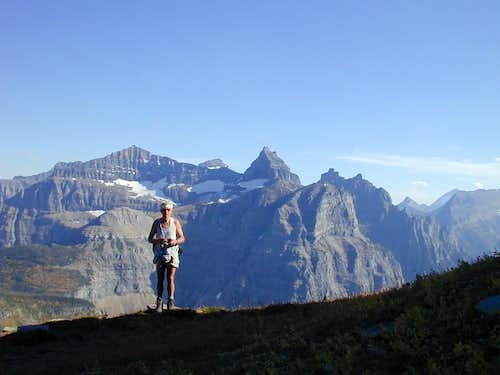 Vern on Mt Custer with Peak 9125 behind and slightly left
From there it was not far back along the ridge N/W to Peak 9,125 which is a worthwhile side trip. We descended to the goat trail traverse and back to the S/E ridge of Thunderbird Mountain which we were interested in climbing. Following the climbing description, we started up the 2nd couloir, but quickly were too high and into difficult cliffs so we retreated down and went into the 3rd or 4th couloir which went easily up until reaching more class 5 pitches which caused us to once again retreat a short way and find ledges leading onto the west face which we scrambled up to reach the summit ridge. Heading north, we located a notch which gave access to the east face. It appears that the highest point lies south of the notch and we found a damp, rotten 60’ chimney that gave us access to the 8,790’ peak.

On return to camp after ~ 10 hours, we found that a bear had again visited our tent removing Vern’s clean shirt and Patagonia shorts saved for our return trip to civilization as well as his sleeping bag and foam pad. We found the bag and pad in nearby bushes and the plastic bag which had contained the shirt and shorts. Although the pad was partially consumed and the sleeping bag had some tears, they were serviceable though no one slept much that night. The shorts and shirt may be lining a comfortable den!


The final day, we left Brown Pass at 7:30 am and reached Goat Haunt by 10:45 catching the 11:25 am boat. We spotted a very large grizzly near Hawksbill Lake, but he had disappeared by the time we passed that area. Just before our arrival at Waterton townsite, a fellow passenger saw a black bear on the west shore and as the captain maneuvered closer, the bear went into the water briefly and swam to a point which it climbed vertically without effort much to our delight.

Good thing you guys left that campsite when you did. Vern should hang garlic outside his tent.

of one of America's crown jewels-Glacier National Park! Great reading, too.