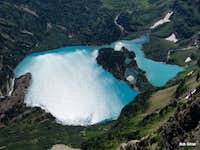 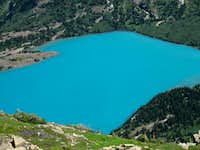 Stating that a particular lake in Montana's Glacier National Park is the park's most beautiful is a bold assertion that will draw plenty of challenges.  Among the named lakes alone, there are several worthy contenders:
But my position is that Margaret Lake beats them all.
On August 13, 2012, from Pyramid Peak and some spots in its vicinity, I beheld Margaret Lake from on high.  In A Climber's Guide to Glacier National Park, the legendary J. Gordon Edwards writes that Margaret's waters are half-milky and half-blue.  I did not know if that referred to the overall color or to some kind of dividing line similar to that one can see, for example, when the Missouri and Mississippi meet and the Colorado and Green meet.  Also, I had to keep in mind that his description could have been written years earlier when the glaciers feeding the lake were much larger and that thus things could have changed.  Anyway, I did not really see what he had described, but I did see uncommon-- no, rare-- beauty, and I decided that the next day, I would visit its shores.
So on August 14, my wife and I set out from our campsite at the head of Glenns Lake and hiked to Mokowanis Lake.  The goal for the day would be to reach Margaret Lake and then proceed to Ipasha Lake, which is only about a mile south of Margaret Lake and less than 100' higher.  Pretty easy, it seemed.

No slouch itself, Mokowanis's glacier-tinted waters have the foreboding east face of Pyramid rising directly above.  In addition, they frame Mount Cleveland, the highest peak in Glacier.  The water is cold, the views are beautiful, and anyone would be happy with this as a destination for the day.
Unless s/he knew what lay ahead. 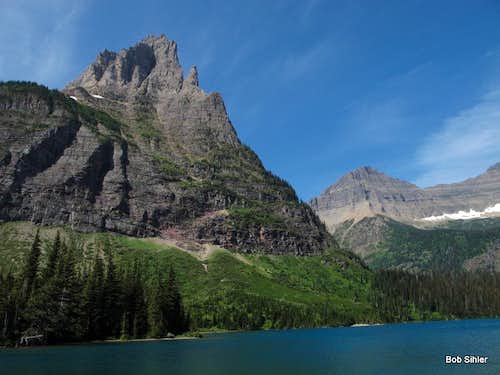 Oh, did I mention that you also get to see the most spectacular waterfall in Glacier out here as well?  Many of the relative few who see this waterfall, including the backcountry rangers, swear that it is the best one in the park.  And it has no name.  Just north of the outlet of Margaret Lake, Pyramid Creek pours over a wide, tall cliff, producing a broad, high, loud, and unforgettable waterfall.


Pyramid Creek is great as well.  As it rushes over a bed of red rock, it forms numerous pools and small cascades, and the color of the water reminds you of the glaciers above that are its sources.

A use trail follows the east side of Pyramid Creek, swings away to the east, and then heads up a gully to the outlet of Margaret Lake.
There is a bench on the other side of the outlet that provides a sweeping view of the lake, but getting to it can be tricky even in late summer; on that mid-August day that I was there, crossing the outlet was easy in the morning but was a different game in the afternoon when water levels were higher.  Losing one's footing during the crossing is likely to result in a little trip over a small cascade.  If the outlet looks too deep or swift for a safe crossing, try looking for an easier crossing somewhere between the lake and the high waterfall.  Circumnavigating the lake is an option, too, but you will often be choosing between awful willows and walking in the water if you do.
What to say about the color of the water and the scenery?  It can't be hyperbole to say that there must only be a few other places on the earth that can compare.  Hopefully, the pictures below will say it better than I can hope to. 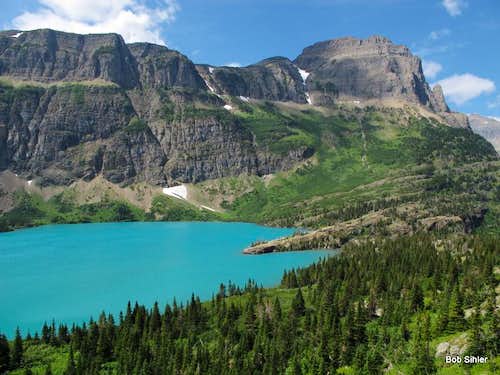 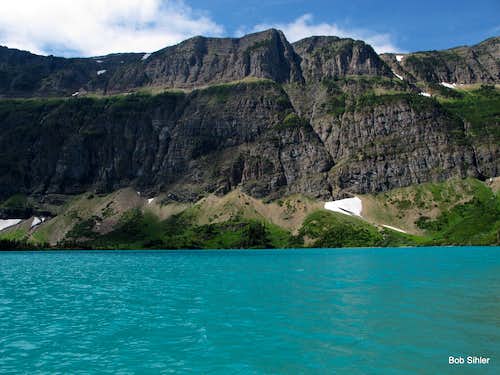 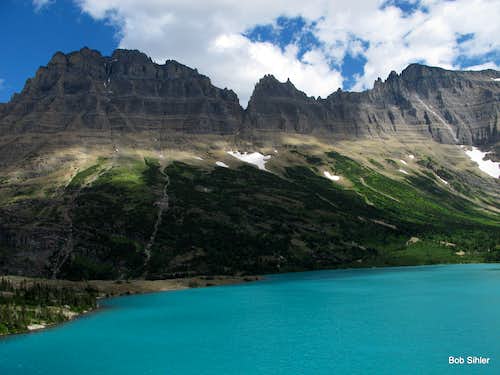 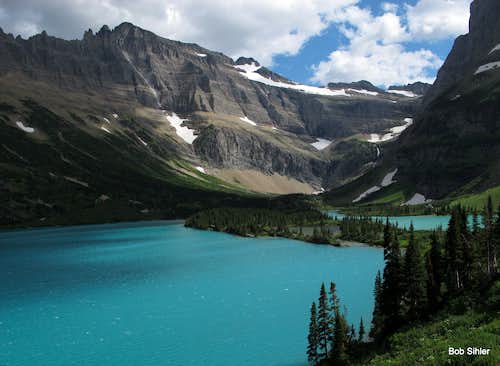 After spending time admiring Margaret Lake from the bench, it was time to move on to Ipasha Lake.  This theoretically simple hike turned out to be one of the most unpleasant hiking experiences imaginable.  Whether we went high or low, we always found ourselves in high, dense willows, usually well over our heads.  Sometimes it was so dense in them that our feet were not on the ground but on the willows instead.  Sometimes, when our feet were on the ground, they sank into marshy terrain.  At first it concerned me that we might be in real trouble if we surprised a grizzly in there, but then it occurred to me that we were making so much noise thrashing through those willows that no animal except a deaf one could possibly be surprised by us.
I began to consider proposing dropping to the stream and either walking through it or along its edge, but the willows got denser and denser closer to the stream and the ground got soggier and soggier.  My wife was hating things enough already and I was worried she might call it quits, so I just pressed on, always attempting to find the easiest path through even if it was less direct.
Finally, close to the lake, things opened up quite a bit, and although it was still pretty soggy, we had visibility and much freer movement for the last few minutes to the lake's blessedly rocky shore.
It took us about an hour to travel that "easy" mile with not much elevation gain.
Now, after all the hell we went through getting there, I was not about to tell my wife that, despite the spectacular rocky and windswept setting, Ipasha Lake was not nearly as impressive as Margaret Lake was.  The reason: the color of the water.  Although Ipasha Lake is partially fed by a glacier (Ipasha Glacier), and although Margaret Lake is thus partially fed by that glacier as well, the real source of the spectacular color of Margaret Lake is the larger and perhaps more active Chaney Glacier, which spills its "glacial flour" into the lake via a waterfall and steep, swift stream from Sue Bench above. 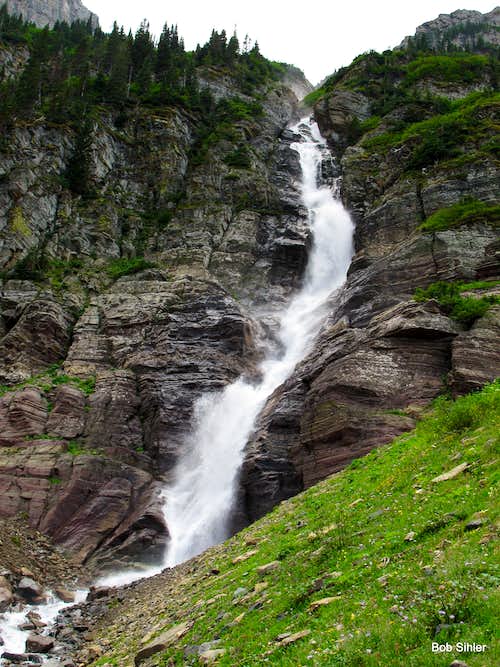 This waterfall draining Chaney Glacier
Still, the waters of Ipasha Lake had a glacial tint not found in most other mountain lakes, and the craggy surroundings, hard wind, and choppy waters created a wild, ends-of-the-earth feel, and I was damn glad to be there and damn glad to know that I would probably never feel the need to go back through that willowy hell!

On the return, I followed a hunch and explored a different way.  And do you know what?  It was almost entirely willow-free.  And do you know what else?  I'm not describing it. These places are too special for me to spill their secrets for all the Internet world to see.  Either go the hard way as I did going from Margaret to Ipasha and earn the scenery, or do some scouting and take some chances and find the better way, which is also earning the scenery.

What a cool idea for a page.

Re: This is Awesome

...is another one to consider. But I'm pretty sure me and Sean Doyle are the only people that have ever seen it.

Actually, I just looked down on Miche Wabun lake from Kaina Mountain. I've never been to it.