I was wanting to go down to Pico de Orizaba and Iztaccíhuatl for awhile. Especially after my failed attempt on Cayambe the year before. I didn't have much time or any time to acclimatize on that trip and just wanted the experience. I wasn't even sure if I would make this trip till 2 days before. I went through All Climbing Colorado up here and they went through Cumbre 7 expeditions. S

ince I fly standby the first issue was making it on a Sunday. One of the worst days to fly. Houston was all booked so I flew to San Francisco at sea level. I hung out with two co-workers as they traveled to Japan for a bit. Due to flow control into SFO my 4hr layover ended up turning into 7hrs. After a huge delay I was on my way and I texted Alex to know I was going to make it. I arrived to Mexico City about 10:30pm.

That was my first time flying internationally with my own equipment. I met my guide, Luis, for the week and we drove down to Amecameca. There I met Ruben and we talked for a bit and I slept in a hotel.

When I woke I had a beautiful view of Iztaccíhuatl right outside of my window. Luis and Ruben showed up and asked if I wanted to climb that. I was like hell yeah. They said Ixta is more fun to acclimatize on. Then we walked down the street and got some breakfast. I had chorizo scrambled eggs and beans. I've never been a fan did beans but those refried beans down there was awesome. The eggs were great too.

Then they went to go get supplies and I explored a Mexican market. It was cool and people were giving me free samples but they spoke no English and we all laughed whenever I said I didn't know much Spanish. After that, we went to Ruben's house to swap vehicles and then headed to Ixta aka Iztaccíhuatl. The plan was to attempt the sub summit of Las Rodillas the next day.

When we got to the lodge an RMI group came. I talked to the two guides on and off. I also went downhill from the lodge and attempted a little acclimatizing. It was cloudy and I got back eight before a thunderstorm hit. After the storm, some of the clouds cleared and we had great views of Popo. My guide cooked up some awesome homemade chicken and rice. I attempted to sleep but wasn't sure if I really did. The lodge was nice since it had beds and bathrooms. 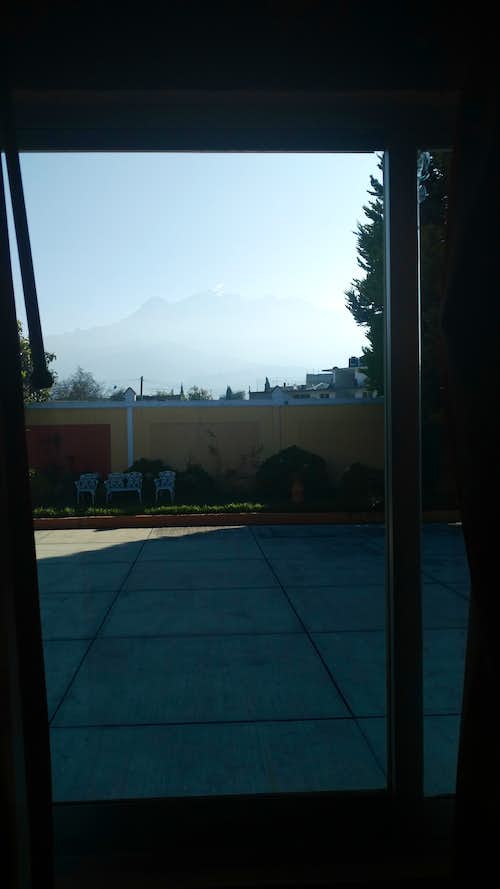 Ixta from my hotel in Amecameca

We woke up about 3 am and packed up. We started the trail around 4:30. It was a nice gradually climb so I could see why it's better for acclimatizing. Around 2.5-3hrs we saw an awesome sunrise and you could see Orizaba peaking out of the top of clouds far in the distance. After that, we went through a very sandy part. It was hard in my double boots.

Then we did a small scramble and made it to the upper shelter shortly after that. On the way down we bypassed that scramble. From the upper shelter we went up a steep dirt gully. The altitude was starting to hit harder now. It felt weird in my boots. We made it up to the ridge and then the fun began. I wasn't expecting any class 3(besides the small amount I did earlier.) Then we got to do some fun scrambling up for a bit at high altitude. We traversed across a small face after and went straight up the the summit of the sub summit Las Rodillas. I was exhausted.

The true summit was 1.5miles away of more up and down. I was proud and happy with what I already did. I almost fell asleep on the summit by the old shelter debris on top. Some clouds moved in and we headed down. We got a little lost on the way down and the ground felt very soft. We went to far down and has to scramble up another section to get back to the top of the class 3 area. I was tired when that happened.

We made it down to the upper shelter and the RMI group was setting up an advance base camp. My guide cleaned out trash from the shelter and then we headed down. I was still going slow but oh well. We got caught in some sleet and rain. When we finally made it back to the car we headed back to Amecameca where we had pizza and I slept in the hotel again. 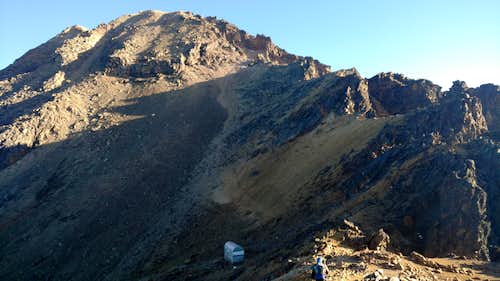 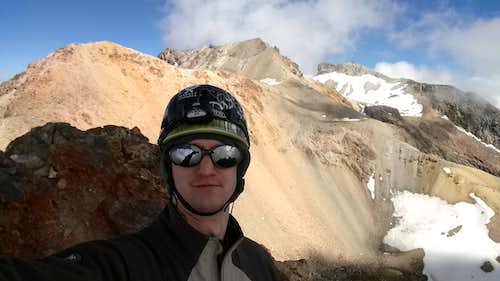 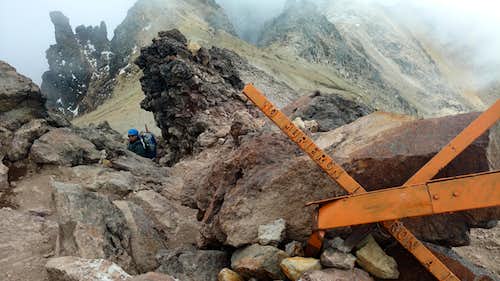 Looking down the top of class 3 section

The next morning we had breakfast at the same place and then headed to Pico de Orizaba. After a couple hour drive we stopped in the city of Tlachichuca. We had some beautiful views of Orizaba on the way towering in the distance. In Tlachichuca we switched vehicles and took a Jeep wagoneer the rest of the way. It was an hour and a half ride or so to the hut. We stopped and picked up a security person to watch our things as well. Unlike Ixta this one didn't have bathrooms or bed but we picked up some sleeping pads. we just relaxed and hydrated. 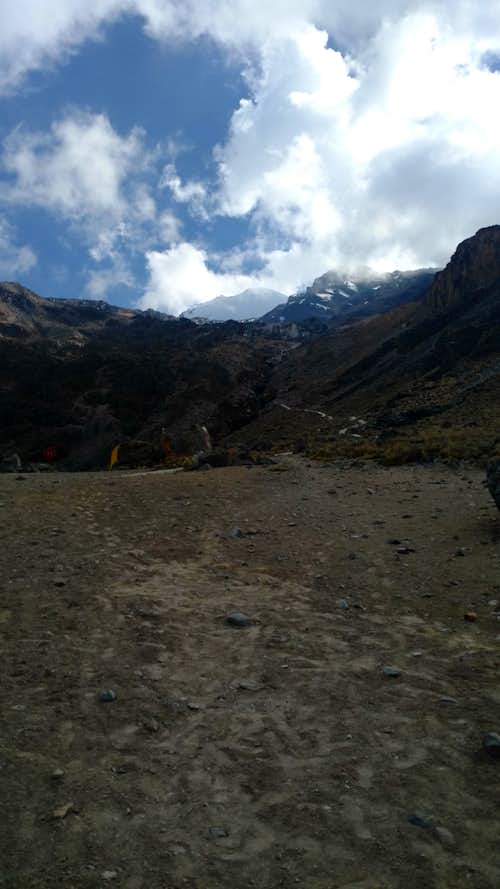 Around 1:00 we woke up to start our adventure. We left the lodge at 2:15. The first few mins in my stomach felt bad and I had to use the bathroom. I had to go find a huge rock to hide behind. I felt better after. I thought I was going to feel better with altitude but like Ixta I kept a slow pace. We lost the trail early and went over some rocks which made my boots hurt my shin a little and got me tired quickly. I kept at a slow pace and kept pushing on. After three hours we pass a couple of tents. Then we did some scrambling.

I was tired and it was hard in the dark with boots. I wasn't sure if I would have enough steam to finish. After 5hrs in the sun was up and we were finally facing the last section. A short bit more uphill and were at the base of the glacier. My guide said it takes 2-3hrs. It ended up taking me 4 haha. We geared and roped up and were on our way. As we were approaching it we saw a small group up higher. After making it into the glacier saddle(I felt good on that part) and started working up the steep section we saw then starting to come down. The steep section has a good steepness to it and it's very high. We saw them sitting down and I didn't expect them to glissade. After they started their glissade one of them lost control and rolled onto their back.

We talked at him/her to self-arrest but their ice ax went flying and they slid well over amine thousand feet down. They were ok and somehow walked it off. I was getting exhausted. I would take maybe ten steps and then put my ax into the ground and start swearing for a few minutes and do it again. When I finally made it to the volcano crater brim and saw the summit cross very very close I fell onto my knees and almost cried.

After a few minutes of slow walking (and a second or two of nausea), I finally made it to the summit. It was beautiful. The crater is absolutely amazing and the views are fantastic. It took me ten hours up total. We were only able to stay up there 15 minutes before clouds started rolling in. Since we were on rope I lead the way down at the start. It was going well till we were caught in a whiteout. I could barely see the footsteps we were following.

My guide and I switched places. His phone fell and glissaded down the mountain. We walked down after it. I was pretty exhausted and needed a minute breather here and there. Luckily we were able to find his phone and it still worked. When we got to the bottom of the glacier we took a little break. I ended up running out of water. I drunk a gallon on the way up and on the start of the descent.

The whole way down the rest of the way it was foggy. We got a little off course on the way down around the scrambling sections. He started setting up a rope in one area. I started down climbing this small section but the holds weren't too good and he tossed me the rope and I did my first arm rappel which was super fun. It was super short. After that, I took my time on the way down.

I was tired and dehydrated. When I saw the lodge after a 15hr day I was excited. I quickly hydrated and we packed up for the fun ride back to Tlachichuca. We stayed ate and rested a few hours at the place where we switched to the 4x4 vehicle. The lady there was extremely nice. 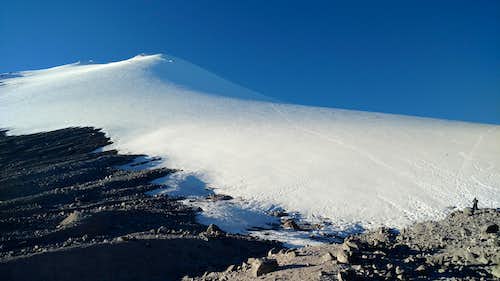 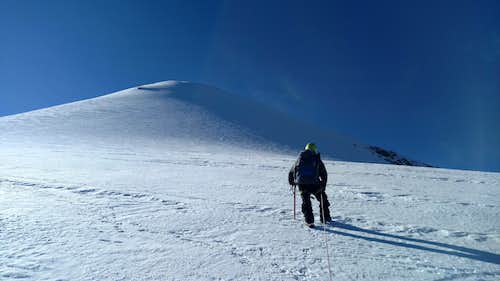 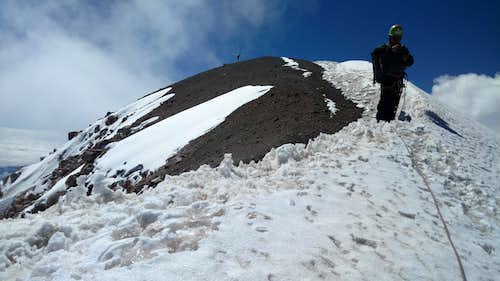 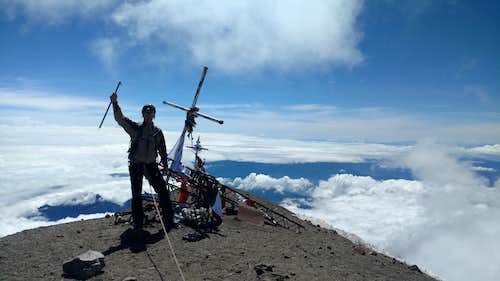 We got up at 1 am and 4hrs later we had returned to Mexico City and I flew out around 7:30 am to Houston and then somehow made it on the next flight to Denver on standby. It was an amazing trip and I'm very excited to finally summit a high altitude peak and can call myself a high altitude mountaineer. I was scared on the way up that I was going to fail but I hung in there and it was totally worth it. I want to thank Alex Saunders, Ruben, and Luis.

A valiant effort to climb that high in just 4 days. Have to say though, if you take a little longer acclimatising, it is more enjoyable and you can go to these sort of heights and feel well - nothing worse than just shortness of breath!
Good luck with your next trip!
Mark