Adam Peak from the trailhead

Adam Peak is another of those Nevada peaks that very few have heard of and even fewer have climbed. However, anyone who has driven the interstate, I-80, between Reno and Salt Lake City have most likely looked at this one without realizing what they were looking at. Afterall, Nevada is full of mountains and this one isn't spectacular enough in looks to get a second look. However, to prominence peakbaggers, this one is of interest because it is the 41st most prominent peak in the state with 3566' of prominence.

Adam Peak was named after Charles Adams, a settler who founded a colony in the Paradise Valley in 1865. Located north of I-80 and accessed by leaving the interstate at Golconda, which is 15 miles west of Winnemucca.

Leave I-80 at Golconda and head east on road 789 as it heads toward Midas. The road is paved to the junction with Midas, 15 miles from Golconda. Stay straight through the intersection and head north another 6 1/3rd miles on a well compacted oiled road to a non signed junction (see map for waypoint) and turn left on this dirt road as it angles back to the southwest. If you hit a junction with the Julian Creek & ranch road, you have gone just a bit past the Osgood Creek turn you need. There is a big oildrum type mailbox for the Julian ranch. If on the correct road, you'll be passing through a fence line with a faded sign in about 01 mile from the road (don't bother stopping at the close gate sign since the gate is long gone), watch for the first road that goes right (about 0.1mile from the fenceline). Take this road as it heads toward Osgood canyon and then a left fork that leads into the canyon itself. The road was passable for a high clearance vehicle with the road narrowing down to where your paint job will get some nice pinstriping from the vegetation that is crowding in. Some pruning was done in the worst sections but it wasn't enough. If you value your paint job, consider walking, it isn't all that far. Take the road until it ends at a spring, this is the trailhead for this hike.

There is no red tape on this one since it is totally on BLM land.

As mentioned above, since is on BLM land, car camping is generally OK but be sure to use "leave no trace" ethics. We camped just off the road as it headed toward Osgood Creek canyon (about 5200' elevation). You could also camp at other spots or near the end of the road but you might be sharing your camping area with cattle during certain times of the year.

Lodging is available in Winnemucca, 15 miles west of Golconda. 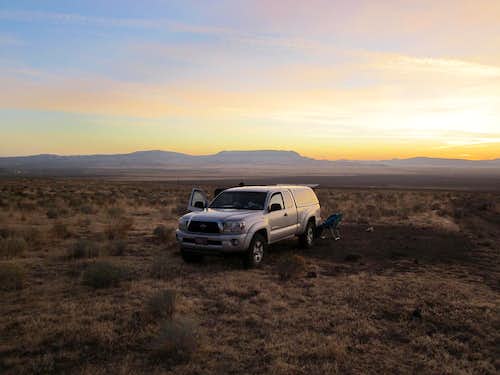 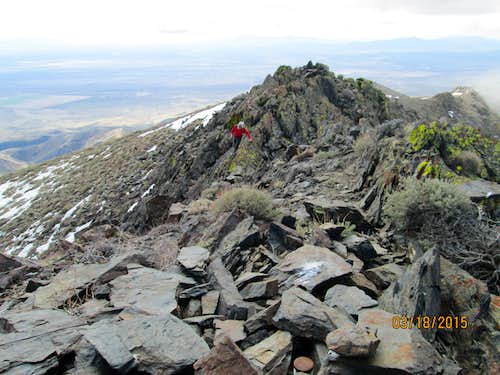 Our route was from the east side via Osgood canyon. From our trailhead at the end of the road in Osgood canyon, there is a very direct way but it is steep even though others that followed us have chosen to do it via what we used for our descent.

On our visit, we elected to go up a less steep slope to the ridgeline and then work our way to the south. Ken Jones has a GPX track of our efforts HERE. We couldn't tell if the ridge to the summit went so we bypassed the ridge by heading over onto the west side and although we had to deal with loose talus and several ups and downs, this way worked fine for us but if we had it to do over again, we would gone up what we used for our descent as I will now mention. We decided to go almost directly back to our vehicle, which we could see from the summit and descended the steep but much more direct slope back to where we had parked. The footing was good despite its steepness and it would definitely be the way we would go if, as mentioned, we had this one to do over again. Once again, see Ken Jones GPX track for the way we went up and down.

Editor's note: It appears he used Goughs canyon and his route may have been about 6 miles round trip with close to 2700 feet in gain. You could combine that with a hike up Hot Springs Mountain for a 2 fer day or at least eliminate driving around to the east side.

Brad Boester indicated that he chose a route on the west side via Gough Canyon also and that worked for him also. See his trip report at peakbagger.com

If the register is any indicator, this is a rarely visited summit.
Here is a listing of those that we found had signed the register and the years:
1995 Gordon MacLeod and Barbara Lilley
2002 John Vitz
2003 Tom Roundtree
2008 Bob Packard
2009 Brad Boester
2010 Tara and Judi (two local women who live at the ranch in Julian canyon)
2011 Mark Nichols, Andy Martin, Richard Joseph, Ken Jones and myself

Since I put this page up originally in 2011, another dozen people or so have also been to the summit of this one. See the log kept at peakbagger.com for all the ascents. Of course not everyone are members of peakbagger so there should be a few more that could be added to the visitor list.

I'd like to hope that perhaps this summitpost page has helped others but since few ever sign summitpost registers, there is no way of knowing.

10th trip to Nevada in 2011This was my 10th trip to Nevada this year and probably the last one for 2011. My first trip was in February with SP member redsplashman and together we climbed Muddy Mountain, the HP of the Muddy Mountain range that is located between Las Vegas and Mesquite. That netted just one peak but I had a nasty accident on the descent that affected my ability to hike for a couple months afterwards. A boulder I had stepped on rolled, throwing me off the thing and then added insult and injury by rolling over my leg, almost crushing it. That is a story in itself regarding how I was able to make it back to my truck. Maybe I'll share that sometime in the future.

The next trip was with Dennis Poulin in April and by that time my leg was recovered enough to where we hiked and summitted Chokecherry Mountain, Badger Mountain, Irish Peak, So. Pahroc Peak, Mormon Mountain, Virgin Mountain and one in Arizona plus two in Utah. A very successful and memorable trip.

Then I returned with Ken Jones in May and together we knocked off Bloody Run Peak near Winnemucca, Ferguson Mountain and Pilot Peak (the western one) before we were stopped by a snow storm near Tonopah and I had to get Ken back to the Salt Lake City airport. We joined Dennis Poulin for the Ferguson and Pilot peak efforts.

I connected again with Dennis in early June when we met in Battle Mountain and proceeded to pick up 6 Mile Hill and Cone BM peaks on successive days. Both are north of Battle Mountain but my trip came to a screeching halt when I suffered a nasty wrist injury on Cone BM. As it turned out, I had broken my right wrist and that forced me to make an early return home to get medical treatment (hairline fracture according to doc). That wiped out the rest of June for me but with a splint and determination, I was back hiking again, I just couldn't use my right hand for much of anything. As I type this in late October, the wrist still bothers me and I can't actually even do a push up using the right arm. That will change I can promise.

A quicky trip to Nevada with SP'ers Greg and Kadee netted us Wood BM near Wells but that trip was cut short when Kadee's vehicle developed transmission problems and we had to limp back to Salt Lake City.

Hooking up with Ken once again, he and I knocked off a peak in Utah as well as a repeat of Wood BM and a new one in nevada for me, Tabor Peak north of Wells.

In July I returned to Nevada once again with Ken Jones (I met him in Elko) and together we did Marys Mountain, North Mountain, Moses Peak, New Pass Mountain, Augusta Peak, Bilk Mtn HP and Orevada Peak, another very successful trip.

August saw me return to the state after hooking up with Dennis Poulin for some stuff in Idaho (where he finished the county highpoints) and I repeated the Matterhorn, Merritt Peak, Pine Peak and McAfee Peak before picking up new ones, Porter Peak and Nannies Peak.

I returned to Nevada a week later with my wife and picked off several more with the highlight being a flat tire near the summit of Lewis Peak at the 9000 foot mark and in 90 degree weather. That trip could be called the "drive up trip" but it netted some good peaks such as Lewis,  Peavine, Virginia Peak and Fairview peak, all drive ups but my wife isn't a hiker at this time so those were really for expediency but yet they all count toward the overall total and were nice to get out of the way.

The last trip to Nevada was the tenth visit to the state and once again with Ken Jones of Seattle. Together we picked off Sonoma, Adam, Cain and Callaghan peaks. 4 peaks in 4 days and by the time I stepped out of my truck at home I had done 40 peaks in Nevada in the 10 trips. That total includes several repeats with Dennis Poulin.

Partners on these trips:

In summary, I have been blessed to have good partners and to have the ability to still get out and hike at the age of 71. Thanks to Ken and Dennis and my wife particularly for making this a successful year. Also, my apologies to redsplashman for scaring the heck out of him when that boulder decided to try and change my life. He was very supportive and together we had quite the adventure together. Not one we'd ever want to repeat.

2015 Update:  I only have 14 Nevada p2k's left to finish the state.  Then I will start on the p1k's and wilderness highpoints.  Anything to keep active in Nevada.

Here is a list of peaks that are forty miles or so from Adam Peak:

climb from the west