The Aiguilles Rouges - meaning Red Peaks - are a mountain range in the French Alps located above the town of Chamonix and the Valleé de l'Arve, reaching the maximum elevation of 2,965m/9,728ft  (Aiguille du Belvédère). They offer numerous objectives for climbing, hiking and mountain biking in summer, and groomed (on piste) and powder skiing/boarding in winter. The range is situated just in front of a world-famous neighbor: the Mont Blanc!

These magnificent “Aiguilles” are lying like an awesome balcony towards the Northern side of the Mont Blanc group: the view over the main summit and over the Aiguilles de Chamonix is exceptional!  From the point of view of the climb, it is to be noted that the gneiss of Aiguilles Rouges is less rough than the Mont Blanc granite, but it’s rich of sharp holds: the climbing way is very pleasant and technical. Moreover, the advantage is that it's often possible to climb on Aiguille Rouges massif when the unsettled weather precludes the ascents in the Mont Blanc group.

Most of the range can be easily accessed thanks to the Brévent and Flégère lifts directly from the towns of Chamonix and Les Praz, operating almost year-round. On clear days you have spectacular views of the north side of the Mont Blanc massif just across the valley. A large part of the range has been declared as the Réserves Naturelles des Aiguilles Rouges in 1974. There are two info points, the visitors center Chalet du col des Montets and a small building right on top of Le Brévent.

Approach to the range by lifts

There are lots of great trails on the Aiguilles Rouges massif. You can start every hike from the bottom of the valley, or use the lifts to start higher up. From the south side of the range (Chamonix side) the views of the north side of the Mont Blanc massif are spectacular. From the north side of the range you have great views of the Fiz massif (2,802m/9,193ft) with its prominent vertical wall below the summit, as well as a number of surrounding ranges and peaks. Consequently, the main ridge offers superb round views, such as the lift accessible summit of Le Brévent.

Popular trails and sights include:

The Aiguilles Rouges are home to several popular lower-grade rock climbing routes that are considered good introductions to alpine climbing. There is a small climbing crag close to the summit of Le Brévent (lift service from Chamonix), as well as a few other less-easily accessible crags along the south side of the range. Some of the harder climbing routes can be found on the prominent vertical south-facing wall just below the summit of Le Brévent. With the help of the lifts, virtually every outing on the Aiguilles Rouges can be done as a day trip. Note that popular routes generally get a lot of traffic. An early start is always beneficial. 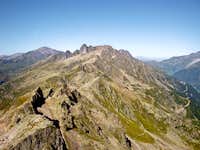 View from Le Brévent. The shaded wall in the front left is the climbing crag.

Allowed on designated trails only. Mountain bikes are allowed on the Planpraz (halfway up Le Brévent) and Flégère lifts between around mid June and mid September.

There is a paragliding take-off site a few minutes uphill from the Planpraz lift station (halfway up Le Brévent) at an elevation of around 2,000m/6,600ft (1,000m/3,300ft above the valley).

A large part of the range has been declared as the Réserves Naturelles des Aiguilles Rouges in 1974. Anyhow there is no particular restriction.

There are two main book stores in Chamonix that stock loads of climbing-related literature, including guide books and maps.

The blue series maps (1:25,000) from the French Geographic Institute (IGN) are all you need. Suggestions:

Ian Fleming, when writing the fictional biography of James Bond, mentioned that Bond's parents were killed in a mountain climbing accident in the Aiguilles Rouges near Chamonix, when the future secret agent was eleven-year-old." [http://en.wikipedia.org/wiki/Aiguilles_Rouges] 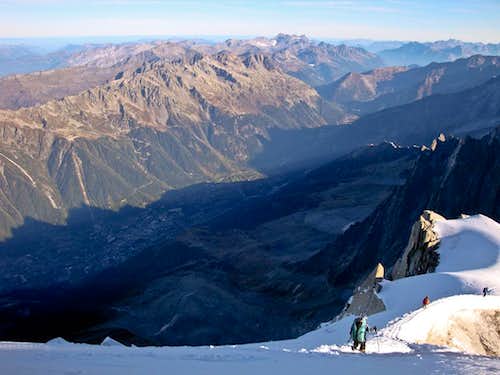 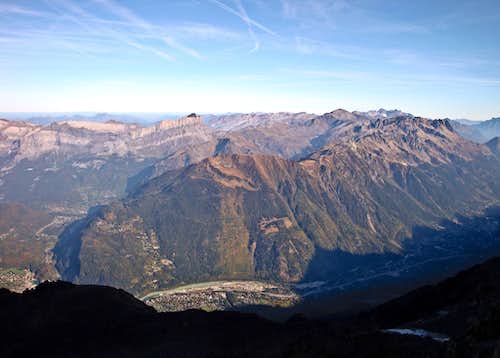 The Aiguilles Rouges as seen from the trail between Nid d'Aigle and the Tete Rousse hut.