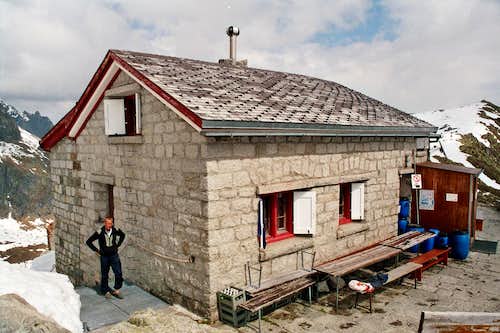 The Albert Heim Hut is an official SAC (Swiss Alpin Club) Hut, located in the Uri Canton of Switzerland.The Hut is located in the high alpine area in the height of 2542 meters and it's an ideal starting point for different activities over the year, as mountaineering and alpine climbing in summer and snowshoe and ski tours in winter. It was the Zurich geologist and glaciologist Albert Heim who proposed the location of this mountain lodge, which was then expanded on several occasions. The refuge can be reached from the valley floor with a simple 1 and a half hour walk and is also the base for ascents to the surrounding mountains, such as the Galenstock, whose view from the refuge is fantastic. The possibility of making great rock climbs is another of the strengths of the highlights of the refuge, such as the Graue Wand, Gletschorn, Dammazwillinge. The Albert Heim Hut offers rooms for 80 peoples, the dining room is a typical room in friendly wood and is feastet from June to October, all the other months the hut is feasted on request or in the high season of ski tours, depending on the weather and, of course, of the request. There is no winter shelter.

The next biggest town is Andermatt wich can be reached:

From Andermatt take the Furkapass road, connecting Andermatt on the Eastern side of the pass and Gletsch, on the Western side. Reach the locality of Realp 1538 m and then the Hotel Tiefenbach m. 2110, situated a few kilometers below the Furkha Pass on the Andermatt side of the pass along the road. In the area around the Hotel Tiefenbach look for a park range for your car if you want to start walking from here (cheaper solution). Alternatively take a military toll-road (7 CHF to be payed at the start), starting on the right of the main road, a few hundred meters past the hotel. The gravel road cuts the walking approach time by about 20 minutes and rises with some hairpins to the Tatsch parking m. 2270 (paying parking, camping is not allowed).

From Tatsch follow the path to the hut. After about 1 hour by walking, the path forks. The right track leads to the hut, just above. You need normally about 1 and a half hour, in winter it might be a little bit longer. The trail to the hut is marked with signs and also long rods.

Mountains around the Hut