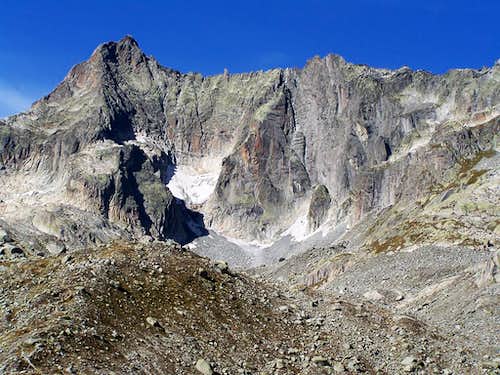 From the southeast - Gletschhorn on the left with the Graue Wand to its right. 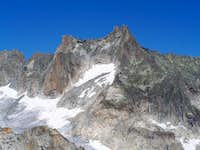 The Gletschhorn is an attractive granite peak located about 8 km south of Furka Pass. Its South Ridge is one of the classic ridge climbs of a moderate grade in the area. Its Southwest Spur has several sport climbing routes. J. Gamma and E Huber made the first ascent in 1889 via the North Face. Because of the melting of snow and ice, this route now has dangerous rockfall and is not recommended. 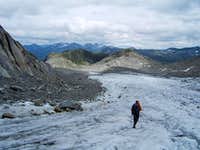 On the glacier below the peak.

The Gletschhorn is normally approached from the area of Tiefenbach on the Furkapass road. There is a trail directly from the main road to the area of the mountain and the Albert Heim Hut or via a shorter approach on a trail starting at Tätsch, which is reached by a short dirt road from near the hotel. Parking at Tätsch was five francs per day in 2010. This can be paid at the hotel, or at a self pay station in the parking area. The mountain is climbed in a long day from the road, but most parties stay at the Albert Heim Hut. It is one to one and a half hours to the hut and from there, about one and one half hours to the mountain. 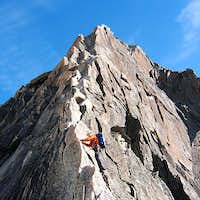 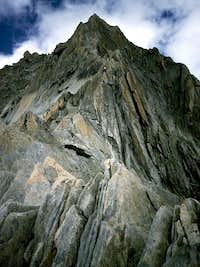 There are eight plus routes on the peak, most of which are not often climbed. The two most popular and frequented routes on the peak are: South Ridge A classic ridge climb of about 11 pitches on excellent granite. Mostly UIAA III and IV with a crux of IV+ or V- depending on the guidebook. Direktor Ostwandpfeiler (Direct East Face Pillar) - IV+ about 10 pitches. Other routes are: SE Ridge, SE Face, E Ridge, NW Ridge, N Face, and N Ridge. An optional traverse from the summit is the Dammazwillinge The main descent route is via a marked way (blue dots)down the SW Face. This involves down climbing on loose terrain and two to three 20 m rappels.