Alone, but Not Lonely, on Top of the Rockies

Okay, except for its height, Mount Elbert doesn’t really stand out among the Rockies. It’s certainly not an ugly mountain, but it’s not exceptionally striking, either. All of its established routes are walk-ups, steep and demanding on the legs and lungs, yes, but walk-ups all the same. So Elbert is hopelessly outmatched by other Rocky Mountain park, range, and state highpoints such as Uncompahgre, Blanca, Longs, Gannett, Grand Teton, Granite Peak, and Mount Robson, to list a few.

But Elbert has something all of those other mountains do not: it is the highpoint of the Rocky Mountains, North America’s longest and, in my opinion, greatest range (some include parts of Alaska’s and Mexico’s ranges into a type of massive Rockies system, but most accept the range’s ends as being in the Yukon and northern New Mexico). For someone like me who loves the Rockies on some kind of spiritual level he can’t quite articulate, standing atop Elbert, at least once, is a must.

It is too bad Mother Nature has not given Elbert the 62 feet it needs to surpass Mt. Whitney as the highest point in the Lower 48. Spectacular as the Sierra Nevada are, and I do think Whitney is a much more beautiful peak than Elbert is, and far more challenging, the wild and epic Rockies still deserve to have the highpoint, or so I think. But at least I got to enjoy the views from the top of Colorado and all the Rockies. Whitney hid itself and its views from me when I was just minutes from the summit, delivering thunder, hail, and rain instead.

The hike itself, which took about two hours, was largely unremarkable, just cold, pretty, and fast (owing somewhat to the cold). Starting out an hour before dawn is not always fun, and this particular morning was cold and windy, numbing my fingers despite their being stuffed into warm gloves and making my eyes tear and my nose run like crazy, but the payoff was that I had the popular summit to myself—not an easy thing to do on a summer weekend, considering I counted 90+ people heading up as I went down. In fact, I got up and off early and fast enough that I was almost back to treeline before I encountered other hikers. It was nice having the best parts of the mountain to myself.


The Crown of America's Wild Heart

The Northeast Ridge route is steep but has no actual climbing involved, about a third of it is in boring, viewless forest, and the scenery is not even close to Colorado’s mountaintop best (yet it’s no slouch, either), but Mount Elbert is the crown of the Rockies, my favorite range, and reaching the summit meant a great deal to me. It is one of those places that have given me some sense of spiritual completion and satisfaction, something more than just another pretty mountaintop.

Standing there, I faced north and imagined that I was looking out over the Winds, the Tetons, the Absarokas, Yellowstone, Bob Marshall country, Glacier, and the ice-draped Canadian Rockies, all the way to the edges of the Arctic itself and the land of the midnight sun. I imagined all that wild word was awaking under my reverent eyes. For just a moment, I stood alone atop the crown of America’s wilderness spine. Priceless. 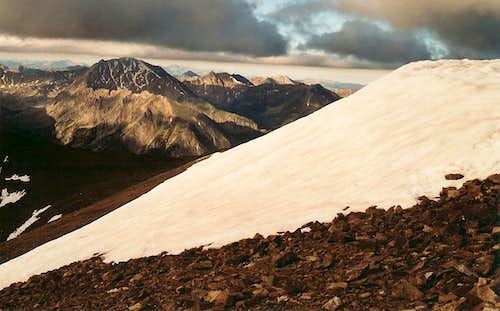 View Alone, but Not Lonely, on Top of the Rockies Image Gallery - 4 Images

Thank you, Tim; this was tricky to do. I wanted to express that there is something special about Elbert even though it's not one of our country's famous peaks, but I didn't want it to sound like a rant about crowds, either. I'm polishing a similar TR on Longs Peak and will post that soon. Then I'll probably be quiet with TRs until after that Wyoming trip in July.