Desert solitude. Rugged badlands scenery. Rock that is more dirt than rock. Views of famous, spectacular Manly Beacon that maybe only a handful of people see each year. More views that seem to stretch on forever. The grandeur of the pristine and the solace of anonymity.

Badlands Peak. Everyone sees it when they stand at Zabriskie Point and look across the badlands of Golden Canyon and Gower Gulch past Death Valley to the high peaks of the Panamint Range. Many people photograph it, as it helps frame the mountains in the background, or they photograph it for its own sake because of the deep red with which it can glow at dawn.

It's at the northern end of the Black Range, where the mountains suddenly meet the badlands that in turn suddenly give way to the flatness of Death Valley. The formation is something in between a badlands butte and a true mountain; it has the stature of a mountain (relative to its surroundings), but much of it consists of the clays and the hardened mud of classic badlands. So it's a mutt, but, as anyone who has ever known one might tell you, mutts frequently make the very best dogs since they often get the best traits of their parent breeds. Thus it is with Badlands Peak, which has the bulk and the sweeping views of a mountain and all the ruggedness and color of the badlands.

Badlands Peak is not even the official name of this peak; it is simply a functional, site-appropriate name for the purposes of this page. (It's not very creative, but it's fitting and beats Point 1360.) Topo maps don't even indicate an exact elevation, and there is no benchmark on the summit, though there is a cairn. Although my GPS device gave a reading of 1338', maps suggest the altitude is at least 1360'.

Still, it's a very worthy peak. Even though it's not far from the trailhead, the peak invites a journey that will quickly take you "far from the madding crowd," and the journey is a small adventure into some beautiful, real desert wilderness. 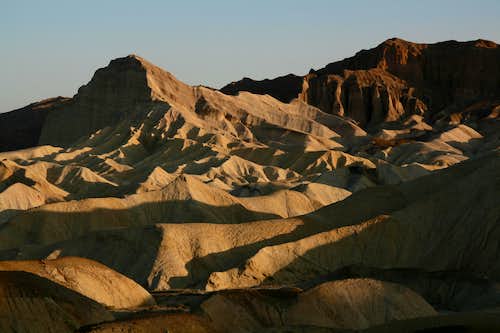 It would be nearly impossible to document the exact route I took, and there are a few different ways to reach the summit, anyway, but here are the essential statistics and a synopsis of the route I took:

Distances--
•1.6 mi to the summit taking a mostly direct approach from Zabriskie Point.
•2 miles back via northern ridges and gullies and Gower Gulch.

Elevation Details--
•Floor of Gower Gulch below Zabriskie Point—533’
•Summit—1338’ (GPS reading; NOTE that the ups and downs involved with crossing ridges and washes will add at least a few hundred more feet to the total elevation gain.)
•Return to Gower Gulch—299’ (I left the wash I was following and crossed over some small ridges to reach the gulch; following the wash all the way to its junction with the gulch would have put me at an even lower altitude and a longer distance from Zabriskie Point.)

Route Synopsis-- From the overlook at Zabriskie Point, one can see a prominent dark-topped formation to the left (south). This formation is visible in the first picture in the Overview section. To head more or less directly for Badlands Peak, you must go over or around that formation and start following the winding washes and ridges beyond it. The walking in the washes is easy and the hiking up and down the ridges is steep, but you don't want to spend too much time in any particular wash lest you find yourself losing too much elevation or going too far and having to backtrack. If at any time you are disoriented or want to site the peak's location relevant to yours, just hike or scramble up a nearby ridge or butte to get a look around. If you should somehow become lost or need to bail out due to injury, the heat, a shortage of water, or other reasons, just follow a wash until it eventually enters the much-wider course of Gower Gulch, which will follow a mostly easy downhill grade all the way out of the canyon and then north to the Golden Canyon parking area, where help will not be far or long away (this is probably the most popular trailhead in the park). You can also, of course, hike back uphill via Gower Gulch to Zabriskie Point, but if fatigue is a concern, you may want to go with the downhill option.

But back to the route-- I left Zabriskie Point by dropping directly down into Gower Gulch below and then following the approximate course I'd studied from the overlook. As I got nearer to the peak, I found that some of the ridges and ramps I'd planned to follow up it were in fact separated from me by deep gullies, but new ways presented themselves. The true climbing soon began, and the ridge I ascended, shown in a photo in this section, featured a good pitch of Class 3 going on sharp, loose rock. This sharp rock, which I can best describe as prickly, provided great traction but was not kind to the hands. There were sections with moderate exposure, and those sections, not surprisingly, seemed to occur where the footing and holds were the worst. Beyond that ridge, another ridge studded with small pinnacles led to the actual summit ridge (north side of the peak). The final two ridges were just Class 2 walks with easy-to-moderate grades.

To descend, I thought I might be able to follow that north ridge all the way down to Gower Gulch. I found narrow, loose Class 3 conditions again in places, and when I reached a col I'd seen earlier (2 pictures in this section show the col), I chose to descend to the east via a steep, soft gully. The gully soon developed into a narrow canyon with some Class 3 and 4 spots due to chockstones and small dryfalls. When the gully began to widen and level, I went directly over a small ridge and dropped into Gower Gulch. The gulch led to the trail between Golden Canyon and Zabriskie Point, and I followed the trail back up to my starting point.

Please try to stay on the "real" rock and on the buttes that have hard-packed trails as much as possible. The makeup of many of the buttes is loose and easily damaged, and your fun does not justify making long-term scars on the formations.

This is one of the hottest places on the planet, with summer daytime highs usually topping 110 degrees Fahrenheit and often surpassing 120 (I have personally “experienced” 130 at nearby Badwater Basin). Not carrying enough water (one gallon per person per day is the recommended amount) can be fatal. It is best to visit this area from late fall through early spring, but it is accessible all year long.

This is also a dangerous place to visit during wet conditions. Flash floods can be sudden and deadly, and it only takes a little moisture to turn the clays of the badlands into a goo that is almost impossible to hike through. Your feet can literally become stuck in the mud, and your next steps may leave your shoes behind.

Finally, avoid entering the numerous old mine openings in the area. You are allowed to go up to them and look inside, but it against park regulations to enter them. Among the reasons: deadly gases; scorpions, black widow spiders, and rattlesnakes (the old mine tunnels make perfect dens for these animals), and unstable ceilings. 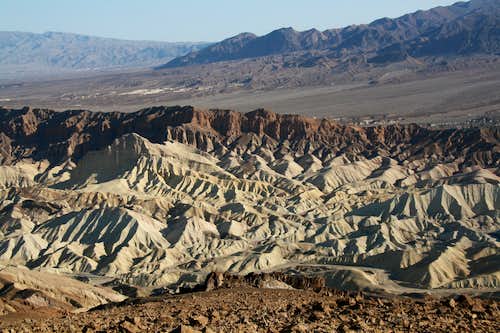 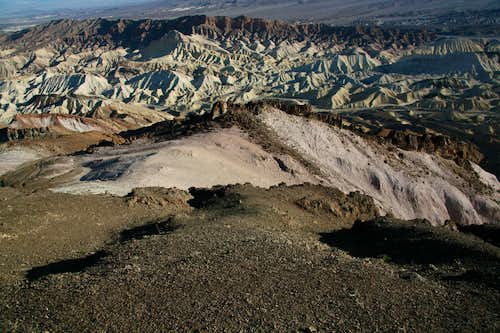 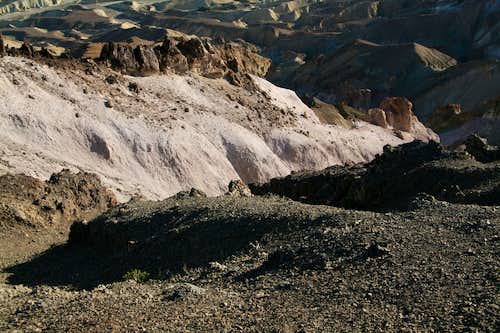 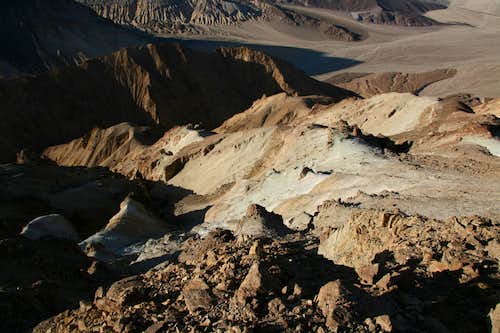 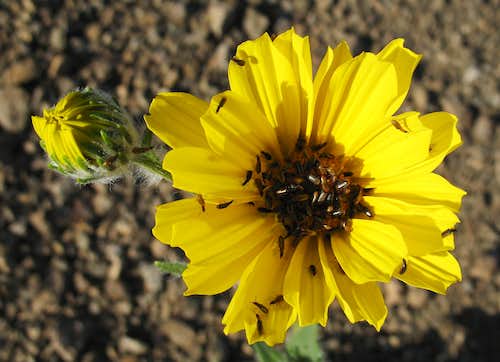 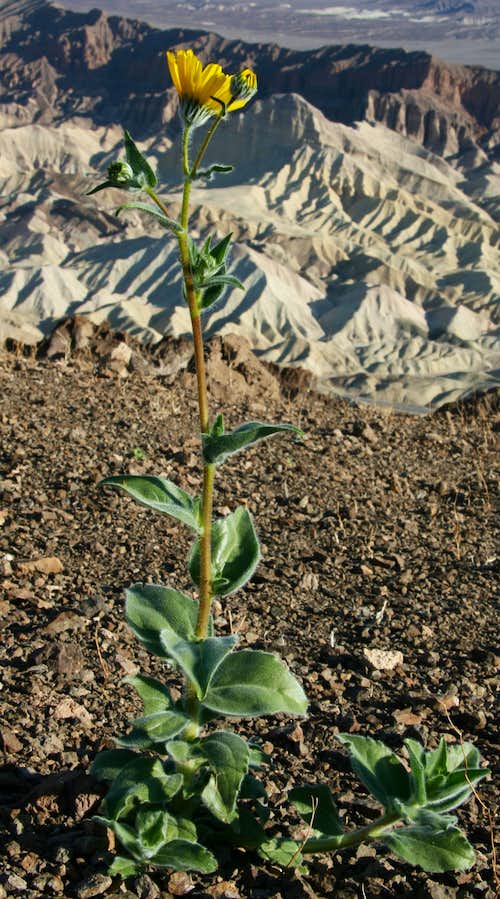 There is an entrance fee of $20 for Death Valley National Park. There is a self-pay kiosk just south of the Dantes View turnoff (off CA 190 east of Zabriskie Point). You can also pay at the Furnace Creek Visitors Center. Because there are no entrance stations in Death Valley, it is easy to cheat on paying the fees. Remember, though, that your fees help support your parks.

You can backcountry camp here but should only do so if the chance of rain is nonexistent. Flash floods make camping in sandy washes a bad idea, and camping on the clay buttes in wet conditions can result in a displaced tent (with you inside) or an unbelievably messy campsite at the very least. Distances here are short enough that backcountry camping really doesn't make much sense.