Bear Mountain is not a giant, even by the gentle standards of the Empire State. However, located a mere 45 miles up-river from New York City, it towers over the Hudson River below and provides commanding views into Westchester, Nassau, and Orange counties and the entire Hudson Highlands area. On a clear day, you can easily make out the skyscrapers of Manhattan from the broad, rocky summit. 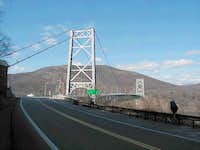 Bear Mountain is the centerpeice for the Bear Mountain-Harriman State Park and provides a little bit of everything. A two-mile paved road and a series of well-blazed hiking trails both access the summit. The square Perkins Memorial Tower on the summit can be climbed for an extra elevation gain of 40 feet and a corresponding improvement in the view. The Park also features the historic Bear Mountain Inn, a rather nice zoo of native wildlife (all of it injured and unable to survive in the wild), a swimming pool and day-use park, boat rentals on Hessian Lake, and many other amenities. It's not a wilderness experience, but the trails to the summit are well maintained and the view is rewarding for an afternoon hike.

The trails on the east side of the mountain see quite a bit of traffic from day-hikers in the State Park. However, you will see few people continuing south and west along the Applachian Trail. The trail winds for many miles through the wilds of the Hudson Highlands and you'd never guess you were quite so close to the largest metro area in the US.

Bear Mountain is steeped in history. As the Palisades and Hudson Highlands faced more and more development in the early 1900s, the State of New York tried to relocate Sing Sing prison to Bear Mountain. Certain wealthy local residents including Union Pacific Railroad magnate E. W. Harriman caused a fuss and contributed land and capital toward the formation of a nature preserve. In 1910, the Bear Mountain-Harriman State Park was born. Over the next decade, it became incredibly popular with tourists from the City, Scout groups and campers.

During the Great Depression, the Civil Conservation Corps made many works at Bear Mountain including the hand-built Perkins Memorial Drive to the summit and the squat tower of the same name on the summit. The Bear Mountain Inn was constructed in 1915, but further facilities were built around it in the mid-30's by CCC workers including pumphouses, a lake, and a ski jump. The Ski Jump was closed in the 1970's and hosted more ski-jump competitions than any other "hill" in the U.S. up to that point.

The first section of Benton Mackay's brainchild the Appalachian Trail was established at Bear Mountain in 1923. Regional groups worked over the next few decades connecting existing bits of trail and building new sections into one monolithic trail stretching over 2000 miles from Georgia to Maine. To this day, the historic Bear Mountain Bridge remains the longest bridge on the AT and one of less than a dozen major river crossings in its 2000+ mile length. Coincidentally, the AT passes through it's lowest elevation point (120') just off the western end of the bridge as it passes the bear exhibit in the Bear Mountain State Park Zoo. If you never see a wild bear on the AT, you're at least guaranteed to see these animals!

Bear Mountain State Park is 45 miles north of New York City. Take the Palisades Parkway to Rt 9W 1.3 miles south, following signs for the Bear Mountain Bridge. From the east, follow Rt 202 from Peekskill. The state park is well signed and is hard to miss.

No permits are required to hike the trails and the park is open year-round. Parking in the state park (either at the Inn at the base of the mountain or at the summit) costs $6. The zoo is $1 each or 50 cents for children.

The outdoor pool is open Saturdays and Sundays from 9 a.m. to 7 p.m. beginning Memorial Day weekend, then 10-6 all-week from late June through the first week of September.

Boat rentals on Hessian Lake run to about $3.50 per hour for row boats or paddle boats. Boating season is similar to pool season.

Bear Mt. is in Harriman and Bear Mtn. State Parks and is part of the Palasides Interstate Park Comission.
General Rules:

Unless you have a permit, you can not;

Unless you are in a designated area you can not;

Bear Mountain is accessible year-round. Summer months (April-October) are a bit busier and you can expect a modest array of tourists on the summit. Most drive up, but a few souls will share the trail. Winter conditions are generally mild, but you should plan accordingly.

Camping is not allowed in the State Park. For those with more of a taste for luxury, the Bear Mountain Inn provides all the comforts of home in a natural setting.

Lakeside lodges are available for those who seek a more rustic atmosphere and a little more privacy. Overlook Lodge, a modern hotel obscured from sight by the trees but nestled above Hessian Lake, is also available for overnight stays. The inn can be reached at (845) 786-2731.

I've adopted CharlesD's original page who adopted it from MikePolec. I have made some minor improvements and changes. Anyone with photos is urged to submit them. Thanks! -- RobA

Bear Mt. Inn is curently closed and is going under renovations

Camping is allowed at lean-to sites in Harriman-Bear Mountain park.

Looks like the NYNJTC will be doing some major trail work on Bear Mtn. over the next 5 years,
Source

Nassau county should be changed to Putnam county in this post. Nassau is out on Long Island.

Nice write-up but 10 years old now. The Trail Conference did much work on the trails of Bear Mt., mainly by adding hundreds of stone steps and gravel. Up top, there's an ADA-compatible trail. The Inn has been renovated, after years and years, and is open for business. Parking is $8, charged only on weekends in the off season. The zoo, ice skating, pool, playing fields, lake, and road to the top are all about the same as they were 10 years ago.