The Black Mount range is located in the Central Highlands of Scotland. It runs between Glen Orchy in the south, and between Glen Etive at the start of Glencoe in the north.

For anyone who has driven north along the A82 road, the will undoubtedly have been drawn to the plethora of peaks on show on their left after passing by Loch Tulla, especially when seen in full winter conditions. The peaks of the Black Mount continue from here in an unbroken line all the way to the start of Glencoe.

This range is the main area for red deer within the Central Highlands. Throughout the years it has always been this way and the estates have always ran deer stalking activities during the hunting season. This is no better shown, than by the name of one of the peaks; Meall a’Bhuiridh. Hill of the Roaring Stag. This must have been so named by the old Scots who’s clans worked the land here and watched the stags fighting for dominance during the mating seasons.

The Black Mount range gets its name originally from the name of the forest, The Black Mount Forest. After large amounts of deforestation over the years the name of the range has become synonymous with the peaks instead. It’s a shame that it now looks so bare, I can only imagine what it must have once looked like covered in a plethora of trees that included the Scots pine which is now so sparse.

The geology of the area is mainly of Cruachan granite however, mica-schist, quartzite and gneiss are also found within the area.

The peaks of the Black Mount offer so many different opportunities for the hiker/climber throughout all the seasons. The peaks are varied and there are lots of different routes of ascent available. The most famous of these being the Clachlet traverse, an entire traverse through the range from Stob Ghabhar in the south to Sron na Criese in the north.

Inveroran
From Glasgow take the A82 road ,via Loch Lomond, until reaching Crianlarich.

Glencoe
Route as above however, continue straight on at Bridge of Orchy along the A82 until reaching Glencoe Ski Centre.

From Glasgow Queen Street station take the West Highland Railway line to Bridge of Orchy. From here, you could hike towards the south of the Black Mount or hike/hitch/catch bus the remainder of the way to the Kingshouse hotel in Glencoe. Train timetables are available here

A bus service runs daily from Buchanan Street bus station in Glasgow to Fort William, via Glencoe, and then to the Isle of Skye. A full timetable is available here 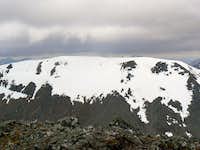 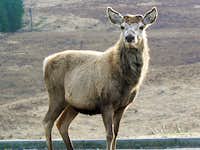 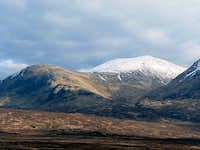 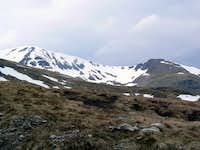 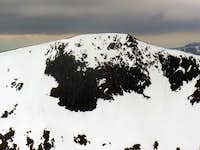 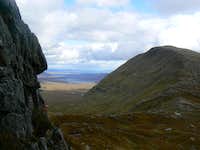 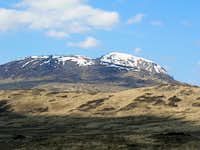 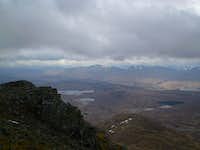 Meall a’Bhuiridh (translation: Hill of the Roaring Stag) stands at a height of 1108m/3635ft and is the highest peak within the Black Mount Range. This peak is classified as a Munro and is number 45 in the Munro heights table. The site of the first commercial ski-ing operation in Scotland has caused this peak to be badly scarred, however it is still one of the finest peaks in the range.

Criese ( pronounced Kraaysh) stands at a height of 1100m/3609ft and is number 50 in the Munro Tables. Located in the north eastern tip of the Black Mount range, Criese is the highest point of a 3km ridge that travels from Sron na Criese to Clach Leathad. The northern spur Sron na Criese is best seen from the Kingshouse hotel and this viewpoint gives an almost vertical look to it, especially when covered in snow.

Stob a‘Ghlais Choire (translation: Peak of the Grey Corrie) stands at a height of 996m/3268ft and is a Munro Top. Located in the north of the range it is mostly hidden from view by Sron na Criese however, it is possible to catch a glimpse of its top from certain viewpoints.

Clach Leathad (translation: stony slope) stands at a height of 1099m/3605ft and is a Munro Top. From the east and south-east on the A82 road, its graceful curve and bulky nature are seen to best effect. The start of the ridge that runs northerly to Sron na Criese also has a connecting ridge to Meall a’Bhuiridh at point called Mam Coire Easain. This narrow ridge is prone to icing well into the spring and is not somewhere to be without crampons.

A western oulier of Clach Leathad, Beinn Mhic Chasgaig (translation: MacChasgaig’s Hill) stands at a height of 864m and is a Scottish Corbett. A cone shaped peak that is located to the north west of the range, the best point of ascent is from the Alltchorunn Lodge on the Glencoe to Glen Etive road.

Stob a’Choire Odhair (translation: Peak of the Dun Coloured Corrie) stands at a height945m/3100ft and is number 226 in the Munro Tables. The best viewpoint for this peak is seen from Rannoch Moor, to the east, on the A82 road to Glencoe. Located to the south of the range, this peak is generally done in conjunction with Stob Ghabhar. Route page for this is here

Beinn Toaig stands at a height of 827m and is basically a satellite peak of Stob a’Choire Odhair. This is best climbed from the south or the east and is sometimes added on at the beginning of the route around the peaks of Odhair and Ghabhar.

Probably the finest peak in the range, Stob Ghabhar (translation: Peak of the Goat) sits at a height of 3576ft/1090m and is listed as No.55 in the Munro tables. Stob Ghabhar's pointed summit lies at the centre of a number of ridges that provide excellent walking above deep corries. The best of these ridges is the Aonach Eagach. While not as impressive as its namesake in nearby Glencoe, this short narrow crest still involves a degree of airy scrambling. This southerly peak can be done on it’s own, but is normally done in conjunction with one or more of the peaks within the range.

Sron na Guibhas (Translation: Nose of the Firs) stands at a height of 974m/3195ft and is a top of Stob Ghabhar’s that is located north of its summit. Seen from the Aonach Eagach ridge on Stob Ghabhar to the south, above Corein Lochan, it is difficult to pinpoint the exact top of this short ridge.

Sron a‘Ghearrain (Translation: Nose of the Gelding) stands at a height of 990m/3248ft and is the first of Stob Ghabhar‘s two Munro Tops. This top is located west of the summit along a small narrow ridge.

Stob a‘Bhruaich Leith (Translation: peak of the Grey Brae) stands at a height of 941m/3087ft and is the second of Stob Ghabhar’s two Munro Tops. This top is found west of the first top, Sron a‘Ghearrain.

There are a two areas that are best placed to base yourself for climbing in the Black Mount Range. These are;

There is also a bunkhouse Bridge of Orchy bunkhouse

There are two hotels in Glencoe. Clachaig Inn and Kings House hotel. Wild camping is permitted within the grounds of the Kingshouse hotel as long as you are well behaved.

There are also numerous B&B’s available in the nearby towns of Tyndrum, Crainlarich and Ballachullish which are all within 30 minutes drive of the area. 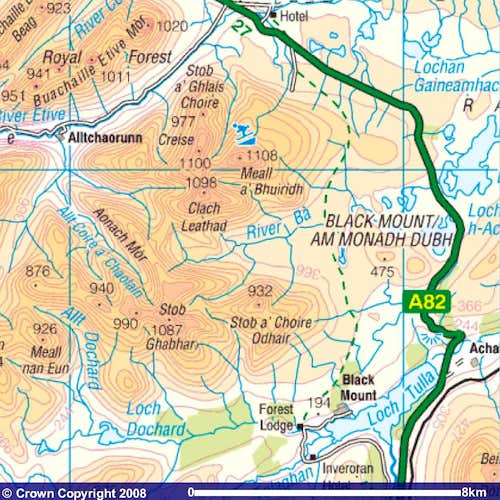 The Central Highlands by Peter Hodgkiss.
Scottish Hill and Mountain Names by Peter Drummond.
The Munros by Cameron McNeish.
The Munro Almanac by Cameron McNeish.
Scottish Mountains on Ski by Malcolm Slesser.
The Scottish Peaks by W. A. Poucher.
50 More Routes on Scottish Mountains by Ralph Storer.
The scenery of Scotland by A. Geike
Geology and Scenery of Scotland by J.B. Whittow
The Corbetts and other Scottish Hills by S. Johnstone, H. Brown & D.Bennet
Rock and Ice climbs: Glencoe & Glen Etive by K.V. Crockett

The weather conditions in the Black Mount can alter rapidly and you should ensure you are fully prepared for all weather eventualities. If you experience a sudden deterioration in the weather conditions and you have any doubts about continuing then please, just turn back. 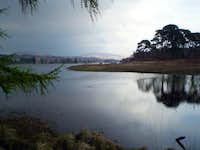 Within the Black Mount region there are numerous bodies of water. These provide areas for replenishment of fluids for all forms of life. The main lochs/rivers are as follows:

Some of the minor bodies of water within the Black Mount region include:
• Corien Lochan
• Lochan an Easain
• Allt a Chaorainn 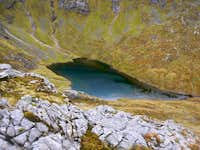 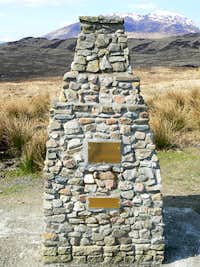 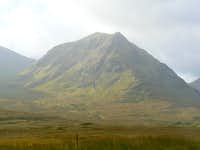 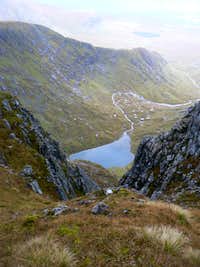 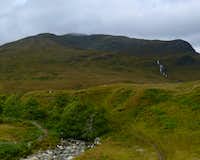 Gaelic is a very rich language topographically, and this basic guide to some of the elements of place names should hopefully assist in understanding how/why the mountains on this page (and Scotland as a whole) are derived. It should be noted that in Gaelic a describing word would be placed at the end of a mountain name; i.e. Sgorr (peak) Dhearg (red), Sgorr Dhearg translated is Red Peak. This would read in English as Peak Red. For a full detail of Gaelic mountain pronunciations I recommend the following book; 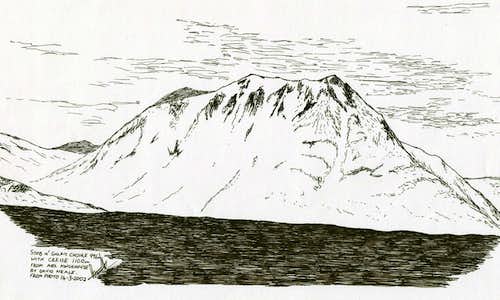