Blacktop Peak is a large complicated mass that lies mostly just outside of the southeastern boundary of Yosemite National Park. The mountain is relatively high in elevation for this region, but it is surprisingly insignificant and weak in both prominence and appearance. The mountain itself is a plateau with a highpoint on both the eastern and western edges. The eastern highpoint is the actual summit. The western summit is designated as Peak 12,651. Between the two summits is an ancient Eocene plateau that has an area of nearly a square quarter of a mile. Traveling between the two points is trivial and if one is on top of one of them, then one might as well tag the other peak as well. As you hike on the plateau between the two summits, you can pause in wonder at the ancient landscape that was somehow left mostly untouched by the eons of uplift and glaciations that slowly eroded away the rest of the surrounding landscape. Blacktop Peak has a prominence of about 360 feet. 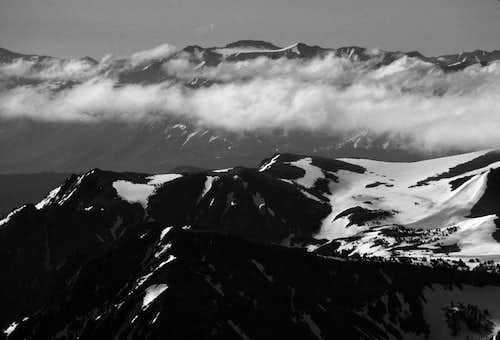 There are some that would probably argue that these high-points should be considered as two separate peaks. I'm not so sure about that. Peak 12,651 doesn't have that 300 foot of prominence that seems to be the conventional prerequisite for an autonomous mountain. I have found that if you are on top of this mass, it does have a feel of being one giant mountain rather that two. Not very scientific, just my opinion.


It's probably worth noting that Peak 12,651 is the implied high point of Koip Crest in R. J. Secor's “The High Sierra Peaks Passes and Trails”. However, a careful examination of the contour lines on the 7.5' topo map will reveal that Koip Crest actually passes somewhat north of Peak 12,651 after a slight 'dog leg' to the summit of Blacktop Peak. Peak 12,651 actually lies on the Sierra Crest just south of Koip Crest.

The Rush Creek Trail probably provides the easiest access to the easiest side of the mountain. Total Round Trip: 16.25 miles with an elevation gain of about 5900 feet.

Reaching the Trail-head from the North:
From Lee Vining or the junction with SR 120 (Tioga Pass Road), drive south along US 395 for about 4.5 miles to the June Lake Loop turn off. Follow the June Lake Loop (SR 158) as it winds above the desolate shore of Grant Lake. After driving approximately 8.5 miles from US 395, you should see a sign for the Rush Creek Trail-head. Turn right (west) at the sign and park.

Reaching the Trail-head from the South:
From the Mammoth Lakes turnoff, drive north on US 395 for about 15 miles and turn left at the June Lakes Loop junction. Follow this highway (SR 158) past beautiful June Lake, Gull Lake and through the resort town of June Lake. Finally after one more lake, Silver Lake, you should see the signed trailhead on the left just past a large RV and trailer park. The distance to the trailhead from US 395 is approximately 7.5 miles.


Hiking Rush Creek:
From the trailhead, hike up the trail past the RV park and Silver Lake. I don't know if this is still an issue, but every time I've been up this part of the trail during spring and summer, I found it to be heavily infested with ticks (ugh!) You may want to prepare yourself with the 'tick beta' found in this article. 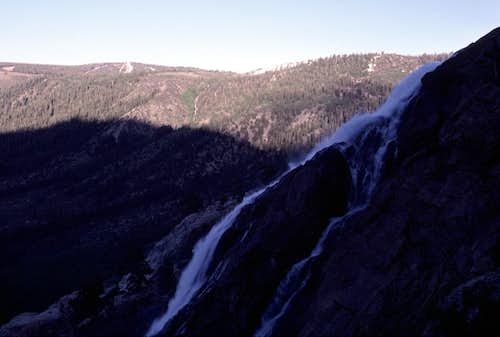 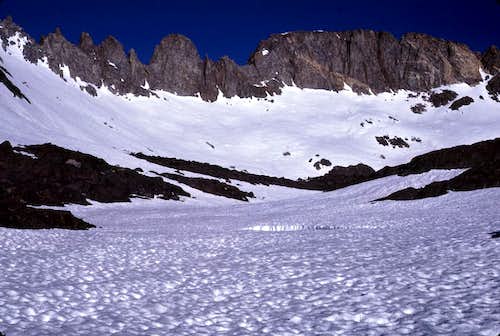 Follow the Gem Pass trail for about one mile to where it crosses Crest Creek at about 10,000 feet. This is where the cross country portion of the route begins. In general, simply follow the course of Crest Creek past several easy benches and small lakes and tarns until the south face of Blacktop Peak is reached. There are several climbing options, but most people will likely choose the east ridge which is easily accessible from the south. 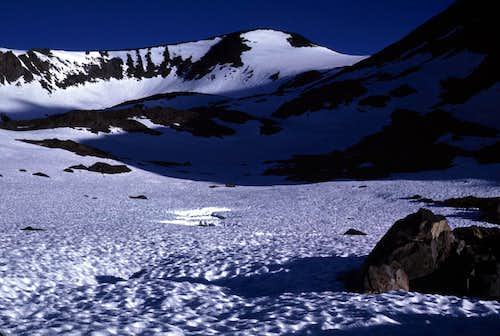 Approaching Blacktop from Yosemite National Park- specifically from Tuolumne Meadows involves a significantly longer hike, but with substantially less elevation gain. Round Trip: 26 miles with an elevation gain of about 4,100 feet.

Simply follow the John Muir/ Pacific Crest Trail south for about 8.75 miles until the vicinity of Kuna Creek is reached. Cross the Tuolumne River and proceed up cross country along the course of Kuna Creek to the base of the northwest face of Peak 12,651 is reached. There doesn't appear to be any easy routes on this side of the mountain. See routes section below.

As mentioned above, the easiest route to the top is from the southern approach to the east ridge.


The right (western) side of the north face may have some class 2-3 routes that are accessible from Alger Lakes. These don't look very pleasant- unless you enjoy a lot of scree and choss. 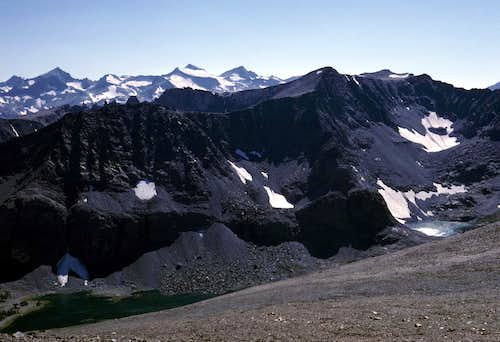 The north ridge of Peak 12,651- a traverse from near Kiop Peak, has been rated as class 4, though some creative route finding may reduce this to class 3. See this trip report. 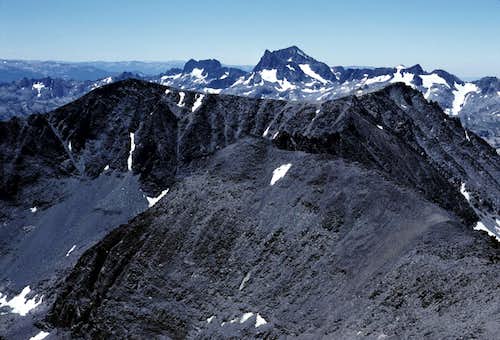 The western slopes may be much more difficult. Mr. Secor mentions a class 5 route up the “southwest chimney” of Peak 12,651. 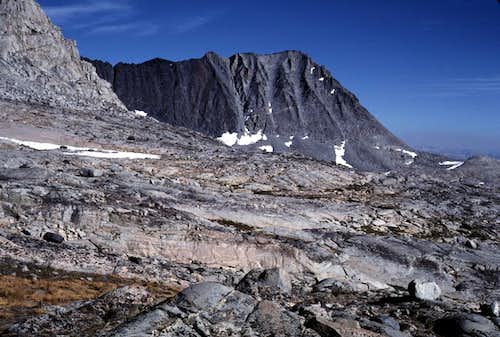 
There seems to be a lot of exploration potential on the many faces and arets of this complicated mountain.

Most of Blacktop Peak lies within Inyo National Forest. The western slopes of Peak 12,651 is in Yosemite National Park. Wilderness Permits are required for all overnight trips in these areas.

Bear canisters are required for food storage for all trips along Rush Creek as well as Yosemite. Do not leave food in your car at the trailhead.

There aren't any camping restrictions in this part of Inyo National Forest, but the usual regulations do apply:

Remember the phrase, 'Minimum Impact'? “Take only pictures; leave only footprints.” Words to live, camp, hike, and climb by. :-)

Yosemite National Park enforces the same regulations listed above with one additional one: No camping within 4 miles of the nearest road/ trail-head.

The name, which befits this peak composed of very dark metamorphic rock, has an unknown origin. It first appears on the 1901 Mt. Lyell 30' map. (Yosemite Place Names, Peter Browning). 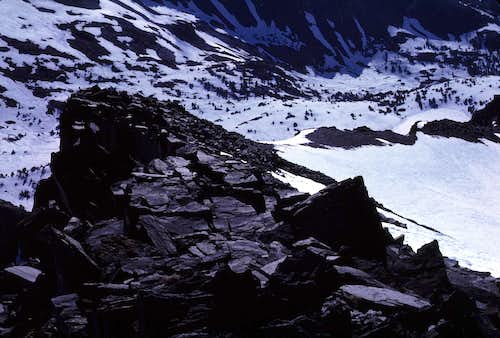 There doesn't appear to be any existing record of the first ascent of this peak. It has been suggested that the first ascent occurred during the first complete traverse of Koip Crest by George Templeton and Milton Hildebrand on August 9th, 1939. (A Climber's Guide to the High Sierra, Hervey H. Voge- editor, 1954).