Storm clouds over the Minarets.

First established in 1964 as the Minarets Wilderness, the Ansel Adams Wilderness lies immediately southeast of--and contiguous to--Yosemite National Park. The 231,005-acre wilderness is a spectacular setting of alpine meadows, lakes, and rugged peaks that encompass the headwaters of the San Joaquin River. It is home to some of the most breathtaking scenery in the Sierra, if not the entire country. Indeed, likely for this very reason, the wilderness at one time was part of Yosemite. Unfortunately, mining interests meant it was removed from the park's jurisdiction in the early part of the 20th century. Fortunately, few claims were ever successful, and the area remains mostly pristine to this day.

Elevations within the wilderness range from 3,500ft, at Hells Half Acre along the Middle Fork San Joaquin River, to 13,157ft at the summit of Mt. Ritter. Like several other areas in the High Sierra, the area is home to spectacular wildflower displays in the spring, and equally impressive quaking aspen displays in the fall. Also found throughout the wilderness are abundant Red fir, Jeffrey pine, and some gorgeous stands of mountain hemlock at the higher elevations. Adding to the alpine feel, a number of small glaciers are found on the northern and northeastern aspects of the highest peaks.

The wilderness was renamed from the Minarets Wilderness to honour the famous landscape photographer and environmentalist by the 1984 California Wilderness Act. The 1984 law also more than doubled the size of the Minarets Wilderness, extending it south from its original southern boundary in the vicinity of Hemlock Crossing and Devils Postpile all the way to its current extent near Lake Thomas Edison.

In addition to the usual wilderness regulations, wilderness permits are required for overnight stays, campfires are prohibited above 10,000ft, and bear cannisters are required if camping along the most popular trails. Camping is also heavily regulated around some of the most heavily visited lakes in the wilderness, including Shadow Lake and Lake Ediza. Current details can be found in the Inyo National Forest wilderness regulations. With one exception, detailed below, dayhikers can explore the area unencumbered by bureaucracy.

Given its outstanding scenery, the area is extremely popular with backpackers, and a quota system is in effect from May 1st through Nov 1st each year. 60% of permits are reservable ahead of time for a $5/person fee, while the remaining permits are obtainable free on a first come-first served walk-in basis, starting 11am the day before your hike. Contact the USFS ranger station responsible for your entry trailhead to procure the permit; this contact information can be found below.

Eastern access to the wilderness via Minaret Road is subject to additional red tape, even for dayhikers. See the Agnew Meadows trailhead page for further details.

Most people visit the Ansel Adams Wilderness during the summer and fall months, typically June through October. Visitation is heaviest during July and August, once most of the snow has melted and all access roads are open. Summer thunderstorms are relatively common during these months.

Winter and early spring climbs are possible, but access to the wilderness is considerably more difficult. All access roads from the west are closed at this time of year, necessitating a very long (20+ mile) approach just to reach the usual trailheads. Access from the east is also more difficult, as road closures again require a longer approach than in the summer. See individual trailhead information for further details. 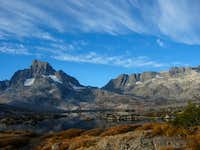 In addition to the usual USGS 7.5' topographic maps covering the wilderness, a number of other area maps can be useful.

Sierra National Forest and Inyo National Forest both publish maps showing forest trails, roads, and land ownership within their areas of jurisdiction. These two maps are not suitable for hiking or climbing purposes, but they are very useful for locating obscure Forest Service roads and area campgrounds.

The Forest Service publishes an excellent topographic map (1:63360) entitled A Guide to the Ansel Adams Wilderness.

Tom Harrison Maps publishes a series of waterproof topographic maps . (1:63,360, 80-foot contours) that covers the entire Eastern Sierra. This unfortunately doesn't cover the Ansel Adams Wilderness in its entirety, but two of the maps suffice to cover the areas most of interest to climbers: Mammoth High Country and Mono Divide. These maps are particularly useful for planning as they include trail mileages.

Forest Service maps can be bought over the phone or through the mail from the National Forest Store. Tom Harrison Maps can be ordered online from the company's website (see link above), or found in most outdoors stores. 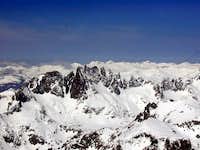 Late-season snow on the Minarets.

RJ Secor, The High Sierra: Peaks, Passes, and Trails - the bible of the High Sierra. Covers trails, cross-country routes, and peaks throughout the area.

Steve Roper, Climber's Guide to the High Sierra - a predecessor to Secor's book. Terse route descriptions and occasionally "old-school" (some may say sandbagged) ratings, but can include some valuable nuggets of information not found in Secor's guide.

John Moynier and Claude Fiddler, Sierra Classics: 100 Best Climbs in the High Sierra - brief route descriptions for an interesting and varied selection of climbs, all mixed in with some entertaining anecdotes. Covers routes throughout the Sierra, with several chosen from the Ritter Range in the heart of the Ansel Adams Wilderness.

Ginny Clark, Ansel Adams Wilderness - a good guide to the trails, lakes, fauna, and flora of the wilderness.

George Wuerthner, California's Wilderness Areas, The Complete Guide Vol 1: Mountains and Coastal Ranges - the first volume in a two book series covering all wilderness areas in the Golden State. He provides a brief overview of each wilderness, and includes just enough information to whet the reader's appetite for a visit.