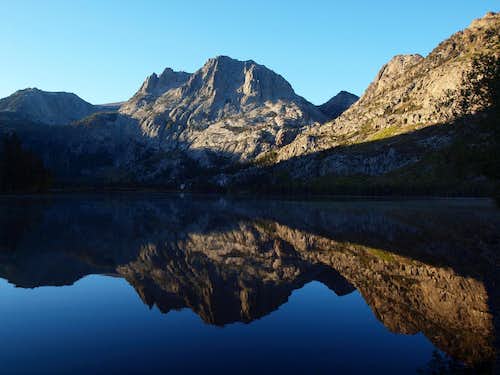 The striking north face of Carson Peak rising above the June Lakes area is one of the most photogenic scenes in the Eastern Sierra gracing postcards and picture books.  From other sides this peak is a rather undistinguished walk up-scramble. The north face offers several class 5 climbing routes. A prominent chute dropping from the east side of the northeast face looks like a hair raising ski descent. Ski runs are featured in John Moyniers Back Country Skiing Californias High Sierra.

The east slope is class 2 from Fern Lake and the west slope is class 2 with class 3 options from Spooky Meadow. The south side is a stroll from the plateau between San Joaquin Mountain and Carson Peak.  There are outstanding views of the June Lakes area below to the north as well as the Ritter Range to the west.

Despite having a prominence of less than 400', Carson Peak is situated in a truly beautiful area, with lakes and rocky cliffs.  It is quite accessible, but fairly ignored as a hiking destination, since many who hike in the vicinity of the peak are backpackers headed towards back country deeper into the Ansel Adams Wilderness. 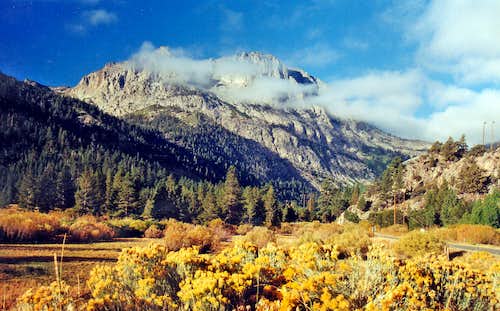 Carson Peak from the east

West slope route: From the junction of Hwy. 120 go south of Hwy. 395 4.5 miles to Hwy. 158 (the north entrance of the Junes Lakes Loop). Go south on 158 for 8.6 miles and take the trail to Agnew Lake right across from Silver Lake 2 miles up to Agnew Lake. Take the trail to the left side of the lake southwest on up 1 mile and break trail to the left into Spooky Meadow. Scramble the west slope of Carson Peak to the plateau and walk north to the summit.

West slope variation: Instead of going straight up the west slope from Spooky Meadow you can continue on the trail past the meadow. It gradually climbs southwest about a half mile. Here you can hike south up onto the plateau above the cirque coming around from the west slope. Then go northeast to the summit.

East slope route: From The junction of Hwy. 120 go south on Hwy. 395 10.8 miles to Hwy. 158 (the south entrance of the June Lakes loop). Go southwest 5.3 miles to the Fern Lake trail. Hike up south 1.7 miles to Fern Lake and take the east slope of Carson Peak up to the plateau. Walk north to the summit.

Descriptions of these routes can be found in The High Sierra Peaks Passes and Trails by R.J. Secor. 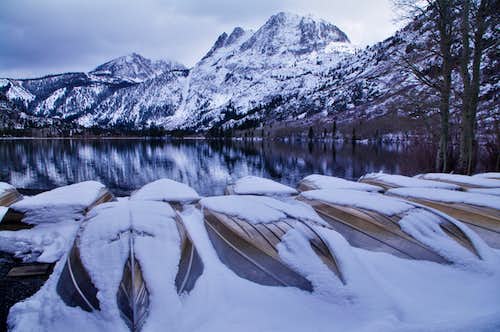 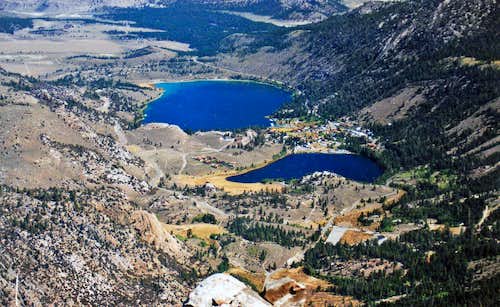 This is a day hike in Inyo National Forest and no permits are required. 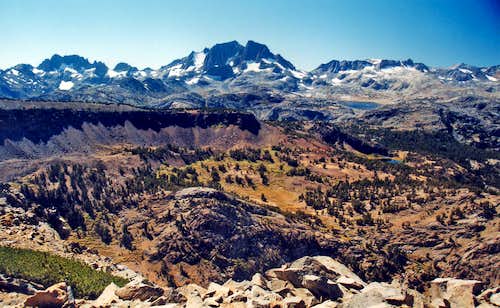 Silver Lake campground: On the west side of the lake 8.5 miles in from the north entrance of the June Lakes Loop at 7,200'.

Gull Lake campground: At Gull Lake 3 miles in on the June Lakes Loop from the south entrance at 7,600'.

June Lake campgrounds: one at the northeast end and one at the southwest end of the lake which starts 1.5 miles in on the June Lakes Loop south entrance at 7,600'. 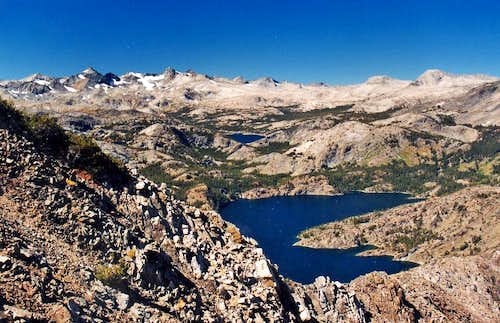 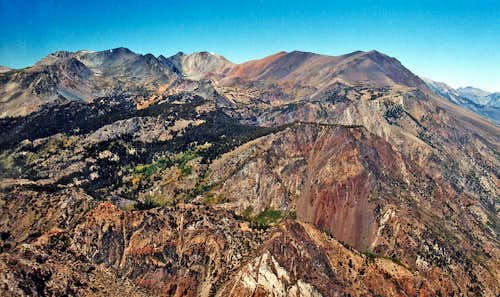