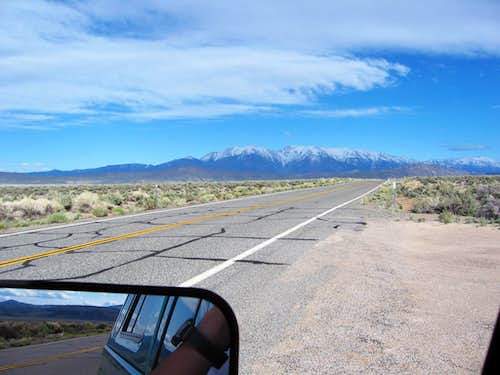 The White Mountains. Boundary Peak is on the left
Sometime in the spring of 2005, John (Splattski) and I discussed over (office) email how we'd each climbed most of the western state high points without ever setting a goal to get them all. Both of us were approaching, or at, one of those "Big Os" in life and highpointing looked like a worthy objective and good excuse to get out and see some new country. With the exception of Denali, most of the western high points have an "easy" route to the summit and don't require a lot of technical gear which really appealed to us. While looking into state high points we came across the Highpointers club and after reading about their adventures it didn't take us long to start making plans to shorten our lists. Boundary Peak, Nevada's highpoint was our first unfinished objective and a perfect excuse for a few days of adventure. We exchanged a few more emails to nail down the logistics and our plans were set.

We had all arranged to meet at the Queen Mine at 9200' on Boundary Peak in Nevada. Dylan was flying into Reno where John was going to pick him up. Gord and I were driving down from Boise. When Dylan and John got to the mine, Gordy and I were looking pretty comfy.. and making fun of John because he arrived 40 minutes later than we had planned a week earlier from 500 miles away through email.
Team: Bob, Gordy, Dylan, and John
Start: (Queen Mine) 9200' - Summit: 13,140' (3940'~)
Climb start 5:45am - Back to car at 1:30pm
Splattski's Trip Report - Boundary Peak, NV

The Queen Mine Approach