Bromaghin Peak is an odd-shaped peak located along the main crest of the Smoky Mountains in central Idaho. 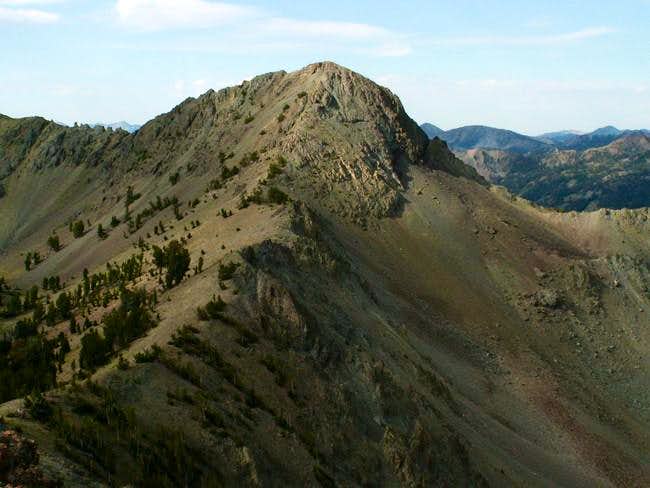 Bromaghin Peak, known to some locals in the area also as Devils Thumb, is the third highest mountain in the Smokys Range and is arguably the most defined landmark in the area. The peak's most recognizable characteristic is its hulky summit block that looks especially imressive when viewed from the north.

Bromaghin Peak is named for Captain Ralph Bromaghin who was a former Sun Valley ski instructor and member of the 10th Mountain Division, who lost his life in World War II.

When climbing, there is usually some confusion as to which peak is Bromaghin. Because there is an active SNOTEL site on Lower Titus Peak, many mistake that for the actual Titus Peak, which in turn Titus is mistaken for Bromaghin. Bromaghin is mistaken as the range's highpoint, which is unnamed on USGS maps but called Saviers Peak. This may be especially confusing if approaching via the lond ridgeline from the north. The Owl Creek Approach may also complicate some because of the various unnamed points along the ridgeline nearby that are nearly equal in heighth.

Bromaghin Peak sees its fare share of people traffic as it is often climbed in conjunction with Saviers Peak, the range's highest point. Some one, who is not knowledgable about mountain conditions, left a supposed register at the summit in 2002. The so called "register" is a small tube, like ones that float in jacuzzi and release chlorine, with about a dozen pices of loose-leaf paper wrapped in a paper bag. The pencil does not work and the paper is torn and ragged, this register will not lost much longer.

The general terrain surrounding Bromaghin Peak is quite pleasent and can be traversed with ease. The summit block is an easy class III climb from any direction and is on solid rock with well defined footholds.