Mahoney Butte may be a small mountain but deserves big mountain recognition for its difficult summit. 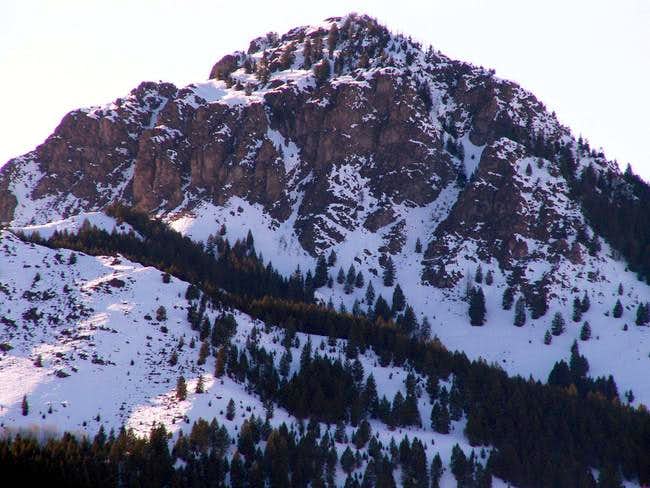 Located in the southern Smoky Mountains of central Idaho, Mahoney Butte stands out as a jagged peak in a sea of banal terrain. Its summit block is a complex series of steep, over-hanging, cliffs. This is truly a rock climber's paradise waiting to be discovered.

Although surrounded by a popular local hiking trail, Mahoney Butte's summit, is rarely visited. So seldom visited, in fact, that there in no official route to the summit. The route that I utilized required a sketchy class four colouir that cuts the eastern face. This is a small mountain, but a very tough one indeed.

Mahoney Butte is named after the gulch of which it towers above, Mahoney Gulch. This area of the Smoky Mountains is rolling in nature. Thick, brushy forests covering most aspects are the general rule of thumb out Warm Springs, Deer Creek, and Greenhorn Gulch. No study has been made to why Mahoney Butte is in fact so outlandish in this area.

An aspect that also makes Mahone Butte one tough climb, is its alpine-like face, yet in a lowland climate. Never have I had to deal with such brush on in a gully in my life, Mahoney Butte truly tests the skills of extreme bushwacking and rope-free climbing.

For access to Mahoney Butte from Hailey, Idaho, drive north of town on Idaho 75. Drive 6-7 miles before coming to a stoplight, to the right is East Fork Canyon, to the left is Greenhorn Gulch. Go left.

Drive through the Bel-Air like neighborhood (yes, 4 years ago it was a beautiful green pasture). The road then begins heading up the canyon of Greenhorn Gulch, the homes become stranger and stranger, just wait. After about 1.5 miles from the light, a sudden turn in the road leaves you with a breathtaking view of Mahoney Butte.

After 3.5 miles of strane homes, the road then quickly changes to a nice dirt road. Drive to the end, another half a mile, and park at the large improved trailhead. 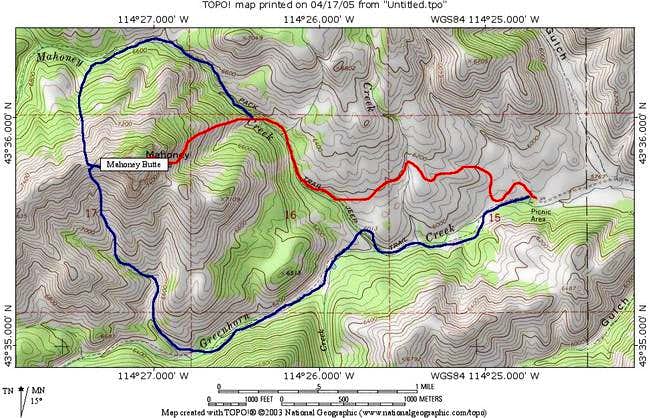 At the trailhead, walk over to the giant turnaround looking for the trail on your right. This trail will be marked "Mahoney Gulch Loop." Begin on a series of switchbacks that slowly lead you up into the hills. The trail then descends into the adjacent valley beneath Mahoney Butte

Follow the trail northwesterly deep into the woods down near the stream. Continue until the trail leads switchbacks and leads up onto a hill just above the stream. Just after the crest of a trail, you will see evergreen tree to the right, from here you leave the trail.

Head down the steep slope to the river once again. Be sure you have walked far enough on the trail above to escape thick brush below. Then cross Mahoney Creek and head for Mahoney Butte's east ridge.

The east ridge is a mellow, enjoyable walk until about 7100 feet. The ridge then swiftly shoots upward as you reach the summit block. Traverse beneath the face through thick brush to the south until a large gully cuts abruptly northwest into the heart of the summit block.

Walk up the class 2 gully enjoying the views of the spectacular terrain on this mountain. After about 200' of climbing, a very steep tree and rubble filled colouir cuts due west. Leave the gully and begin heading up the colouir, staying nearest the brush for foot support. After about 100' of sustained class 3-4 climbing the colouir opens up and you may frely walk to the summit that is another 200' above.