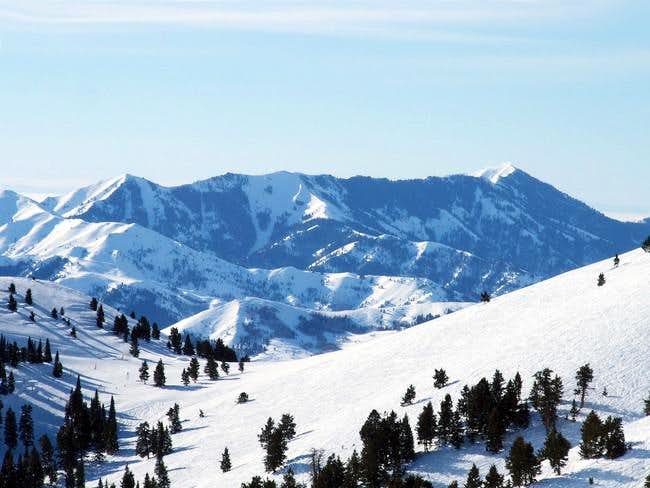 The Snake River Plain forms a smiley face that stretches across southern Idaho. South of this magnificent plain, block-fault ranges run north to south and hold similar terrain to that of Nevada and Utah. North of this plain, however, mountains rise abruptly and are continuous of hundreds of miles. The first major summit seen rising from this plain is Kelly Mountain, it is truly the spot where desert, ends, and wilderness begins.

Although relatively low in elevation, Kelly Mountain is a massive peak. Its summit ridge spans a course of three miles and has more than eight points above 8,000', while it rises nearly 4,000' from the Camas Prarie to the south. Kelly Mountain also stands nearly alone, dwarfing other mountains in the vicinity by hundreds of feet.

When viewed from a southerly or easterly direction, Kelly Mountain appears as a broad open field of sage with a continuing ridgeline. When viewed from the north, Kelly's appearence changes drastically. The north face is tree covered, very steep, and almost impossible to decipher which peak is the highest. What it really comes down to is that this mountain stands out considerably from whever it is seen.

Even though it is situated not far from the bustling town of Hailey, Idaho, Kelly Mountain sees very little, if any, traffic. If more people knew of the scenery in and around this region, the easy access, and wildlife Kelly would become a very popular area hike.

There are many different access points to Kelly Mountain, but which ever you choose, it will be class 2. No class 3 terrain, and certainly no class 1, this is a class 2 mountain.

Primary access to Kelly Mountain is either from Deer Creek Road, or Croy Canyon Road.

Turn north onto the road and continue for about 1 mile until the road splits. Take the right fork and go as far as your car cant take it and park.

Hike north up the remains of an old mining road to the base of the Peak. From here, pick a ridge or gully to the northeast and climb. Once you have gained the south ridge, turn north and an enjoy a mellow walk to the summit.

No red tape but be aware, wildlife in this area is more than abundant so expect anything from moose, to porcupine, to mountain lions, to bears, oh my!

Kelly Mountain is a great early season climb. Because of its exposure and southerly, along with the fact the main route is also a southern exposure, Kelly Mountain may be climbed as early as mid-April in some years.

Access to the mountain is difficult, yet not impossible, though I doubt it is rarely done because of the high avalanche danger in the area.

There is not much room for camping on the mountain, and Deer and Croy Canyons are populated so the best bet would be a hotel in Hailey.

This is my favorite, and I think most accurate, website for weather, but remember, its the mountains so expect anything.

Free dispersed camping with a stay limit of 14 days is available along the Red Elephant and Kelly Gulch approaches (BLM), and in the upper Deer Creek and Wolftone Creek approaches (USFS).