Buttercup Mountain is located in the Smoky Mountains of central Idaho. 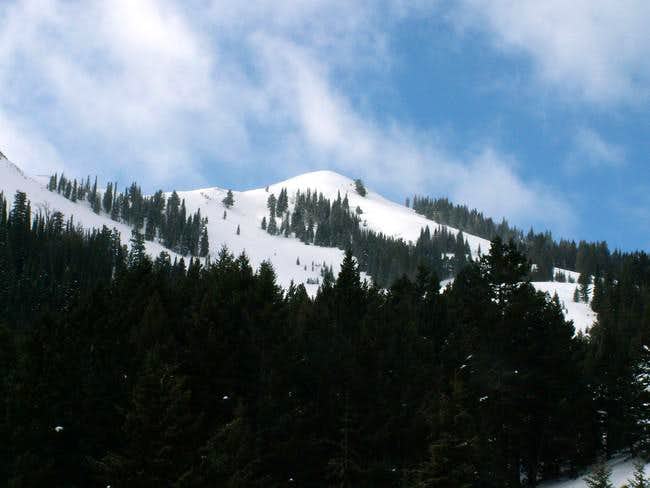 Buttercup Mountain is the southernmost 9,000'+ peak in the Smoky Range. It is one of just a few dominant summits in the region. The terrain around and encompassing Buttercup is raw and unforgiving. With few distinguishing features, miles and miles of winding forests and canyons can be troublesome for those without maps.

Buttercup Mountain is a pointed peak that sits at the head of Deer, Buttercup, and Cherry Creek Drainages. For the most part, the slopes of Buttercup are steep but without obstacles. Its east face and ridge are composed of horrid rotten rock cliffs. Buttercup's steep, talus ridden south face is adorned with several of the aforementioned rock cliffs. While its north face creates a setting unique to the area with a gentled slope, alpine setting with windswept grasses and stunted evergreens. Unfortunately, at the base of the western slopes, Buttercup Mountain has been mined extensively. These mines have been closed and should be avoided.

Because of Buttercup's relative close proximity to Ketchum and Sun Valley and its noticeable pointed summit, plus it is close to a nearby a trail, it is climbed quite often. A very large rock cairn at the summit indicates at least a handful of people climb this on a yearly basis. The easiest and most difficult routes require a couple miles approach and solid class II climbing.

To approach from the east for access to the south ridge and north face routes from Hailey, Idaho, drive north on Highway 75 for roughly 3-4 miles until reaching a turnoff for clearly marked, Deer Creek Road.

Follow this paved road through a small subdivision and then across a large farm. Shortly before reaching Clarendon Hot Springs, Deer Creek turns to a good gravel road. After passing the hot springs, (closed to the public), the road turns to dirt but remains quite good.

Follow the never-ending and winding dirt road to the Deer Creek Trailhead near the base of Buttercup's eastern slopes. The mile is a little more rough but easily passed by any vehicle.

Refrain from exploring the mining excavations on the western side, they, as all old mining ruins, are dangerous.

Clarendon Hot Springs has been closed to the public. Trespassers have been and most likely will be again, prosecuted for entering without permission.

All local dirt roads are closed during winter and wet weather months.

Climbing Buttercup is possible year-round. However, due to access issues in winter, it is usually ascended during the summer and fall months.

Add quite a bit of mileage to each route if planning on making a winter ascent.

There is plenty of room for camping at the Deer Creek Trailhead. Otherwise, camping on or around the mountain is not recommended. The terrain is brushy and steep and not supportive for a camping atmosphere.

There are also quite a few hotels and motels in nearby Ketchum and Hailey.

Buttercup is not located near any major reporting stations. The summit is very exposed to all storm systems creating the possibility for high winds year-round. The following links will provide good information on area conditions.